Top Gear’s new team has painted the LGBT rainbow flag on two cars they raced in Brunei as a row rumbled over their decision to film there just before the Sultan changed the law to allow gay people to be stoned to death.

Andrew ‘Freddie’ Flintoff, who hosts the show with Paddy McGuinness and Chris Harris, revealed they have decided against cutting the film from the new series despite the human rights issues there.

He said: ‘We would never have filmed in Brunei had the law been announced beforehand. No one deserves to be stoned to death, whoever they love. Love is love’.

But critics have pointed out that the country’s implementation of strict sharia laws began in 2014 when crimes such as murder, terrorism, drug trafficking, arson, kidnap, treason and perjury became punishable by hanging or stoning.

The last execution was in 2017 and around six people are understood to be on death row.

Mr Flintoff said today: ‘Even though it has since been claimed that the laws will not be enforced, the threat still stands, and even the threat is an appalling abuse of human rights.

‘In the past couple of months we have thought very hard about dropping the film entirely but we shot it before the change in the law, and both the Gurkhas and other Bruneians worked incredibly hard to make it happen. We don’t want all their efforts to be for nothing. So we’ve decided to go ahead and show it’. 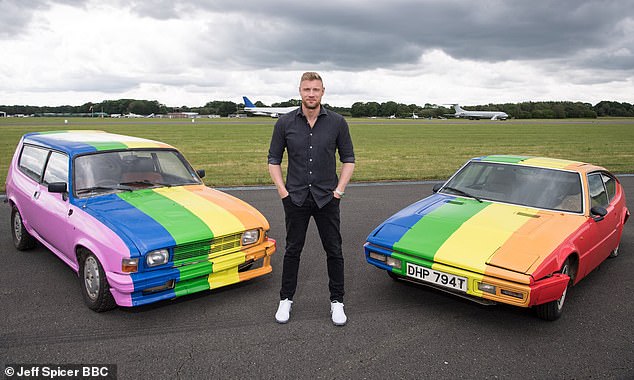 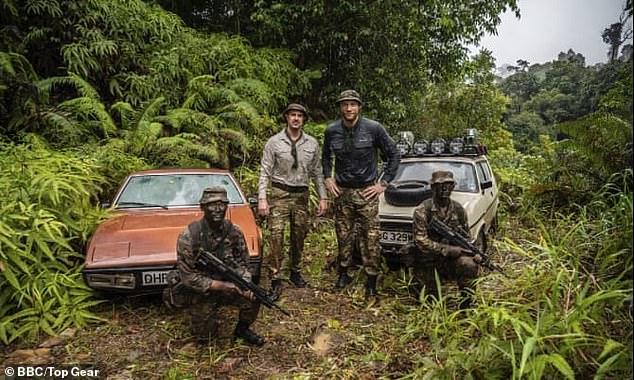 He added in apiece for the Guardian: ‘We flew home on 28 March. That date is important because when we landed we found out that – as we’d been in the air – the sultan had announced new laws making homosexuality and adultery punishable by stoning to death. We were horrified. Like millions of other people around the world, I utterly condemn Brunei’s actions’.

The former cricketer and the new Top Gear team, who made their BBC debut last night, flew to the Brunei rainforest in March, filming with the Gurkhas before racing to the Sultan’s royal palace in Bandar Seri Begawan.

Mr Flintoff said they were ‘in the air’ and on the way home to Britain when the Sultan  announced homosexuality would become a death penalty offence.

Brunei’s government has said that the change in the law is about prevention rather than punishment.

Top Gear’s statement has been hailed by campaigners, with many calling it a welcome change from the non-PC years when Top Gear was made by Jeremy Clarkson, Richard Hammond and James May, who moved to Amazon.

But one critic said the car painting, however welcome, had ‘the distinctive aroma of damage control’.

Another questioning the decision to go to Brunei in the first place tweeted: ‘This [law change] was part of a roll-out of a hardline interpretation of sharia law which has been going on for over five years. I find it bizarre to say ‘we wouldn’t have gone to this country with a despotic govt which attacks human rights if we’d known this one thing’.

Many viewers loved the non-PC elements of the show, which ended abruptly in 2015 after Clarkson was fired for punching a colleague over a steak dinner.

Earlier this year Will Young has slammed the hosts of The Grand Tour, as well as the show’s broadcaster Amazon Prime, for a ‘homophobic’ segment in which a Jeep Wrangler was test-driven. 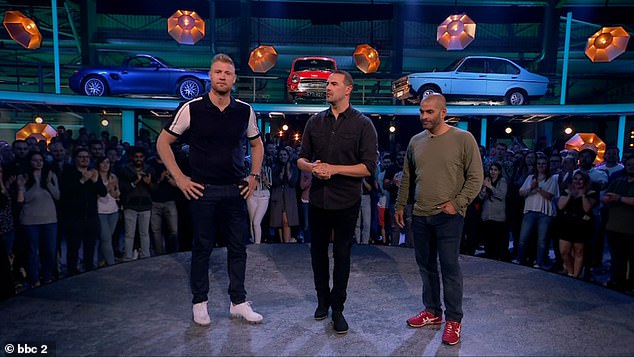 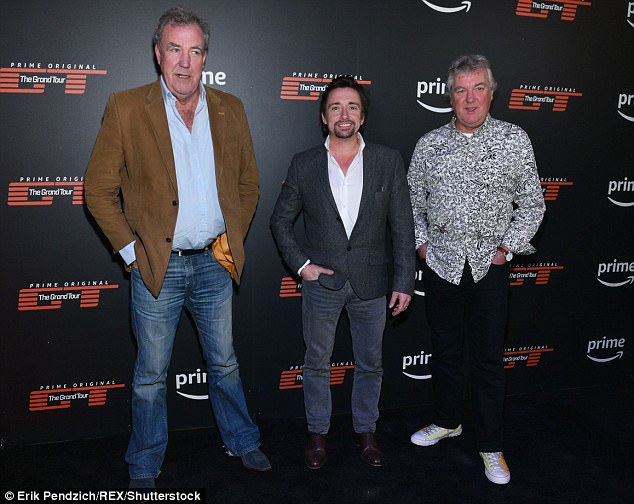 Clarkson, Hammond and May moved to Amazon in 2015 to launch The Grand Tour

The three presenters – Jeremy Clarkson, Richard Hammond and James May – appear on the current season of the motoring show in the bizarre clip in which they claim driving a Jeep means you should wear ‘ventilated chaps’, ‘moisturise’ and play ‘It’s Raining Men’ whilst in the car.

2003: Jeremy Clarkson drives a pick-up into a horse chestnut tree in a car park in Somerset, to test the strength of a Toyota. The BBC apologised to the parish council.

2008: Clarkson makes a joke during an episode about lorry drivers murdering prostitutes, which attracts more than 1,000 complaints to the BBC.

2010: Jokes made during the show about Mexicans, which included them being branded ‘lazy’, ‘feckless’ and ‘flatulent’, spark controversy and prompt an apology from the BBC to the Mexican ambassador.

2011: During a 90-minute India special a car fitted with a toilet in the boot is described by Clarkson as ‘perfect for India because everyone who comes here gets the trots’.

2012: Clarkson is found to have breached BBC guidelines by comparing a Japanese car to people with growths on their faces.

2014: Clarkson was embroiled in controversy when it was claimed he used the N-word while reciting the nursery rhyme Eeny, Meeny, Miny, Moe during filming.

2014: Top Gear is ruled to have breached broadcasting rules after Clarkson used the word ‘slope’ to describe an Asian man.

2014: Top Gear crew is forced to flee Argentina after trouble erupted when it emerged they were using a Porsche with the registration number H982 FKL, which some suggested could refer to the Falklands conflict of 1982.

2015: Jeremy Clarkson is sacked after punching a producer after discovering no hot food had been organised for after a shoot.

In the Colombia Special and sees Clarkson branding the 4X4 an ‘LGB-Jeep’.

The presenter – who was sacked from the BBC’s Top Gear three years ago when he reportedly punched a producer for not offering him steak for his dinner – also joked that LGBT stands for, ‘lesbian, bacon, transgender’.

In the irreverent scenes, Clarkson gets behind the wheel of the Jeep, to which Hammond says: ‘I’m proud of you. That’s a hard thing to do and you’ve done it. You’re going to be so much happier.’

Pop star Young – who is gay – was evidently watching the third episode of the new season when he stumbled across the segment, taking to Twitter to communicate his outrage.

The former Pop Idol winner, 40, branded the trio of men ‘f**king pathetic and actually homophobic’ as well as well as ‘repulsive’ and ‘obtuse, bigoted immature babies’.

And then Hammond and May’s ‘quips’ to Clarkson wearing chaps , a pink shirt , he should get some moisturiser . It’s f**king pathetic and actually homophobic. And screw them and the show and Amazon’.

In December 2017 Richard Hammond hit out at those accusing him of being homophobic after he questioned why gay people come out publicly.

The former Top Gear host faced a backlash on social media after saying it is ‘old-fashioned’ to make a big deal of someone announcing their sexuality.

‘When I hear of people in the media coming out, I think, why do they even feel the need to mention it?’ Hammond, 47, said in an interview.

Causing outrage, he added: ‘It is so old-fashioned to make a big deal of it. That isn’t even an interesting thing to say at a dinner party any more.’

The comments sparked a Twitter storm with members of the LGBT+ community attacking him as being homophobic.