A Las Vegas man was tortured for hours with a blowtorch, ax and other implements before he was forced to strip and walk off a cliff — and then shot to death, records show.

The body of Roy Jaggers, 27, was discovered Aug. 1 in Nye County’s Cathedral Canyon, where his neighbor, Heather Pate, her boyfriend, Kevin Dent, and Pate’s former flame, Brad Mehn, allegedly tortured the man with knives, a baton and an ax, according to a criminal complaint obtained by the Las Vegas Review-Journal.

Mehn, 37, allegedly then shot Jaggers after he was forced to strip off his clothes and walk off the cliff. 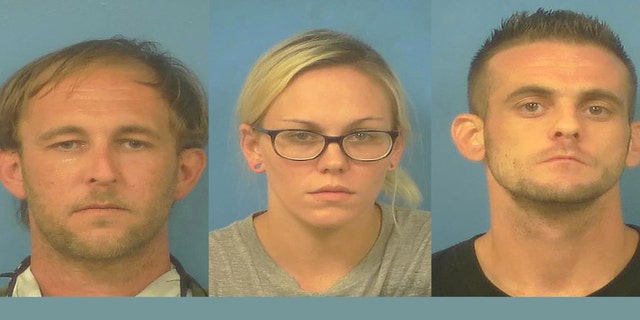 Sheriff’s officials said in a video statement early last month that Pate, 27, and Dent, 36, had lured him to her home because they believed he hurt the woman’s child.

“When he arrived, they confronted Jaggers and subsequently beat him,” Nye County Sheriff’s Capt. David Boruchowitz said. “Upon arriving in Nye County, they met Mehn who led them to an area in the desert where they tortured Jaggers over multiple hours using numerous different weapons.”

The trio then drove Jaggers 25 miles away to Cathedral Canyon, where they made him walk off the cliff’s edge. In the gorge below, he was then shot multiple times, according to the complaint.

Prosecutors are considering the death penalty for Mehn, who allegedly fired the shots that killed Jaggers, the Review-Journal reported Friday.

Jaggers’ mother, Kassy Robinson, said her son occasionally babysat Pate’s children or watched her dogs. She declined to discuss details of her son’s gruesome slaying, but insisted he was a non-violent, kind man.

Jaggers’ father, Jerry, said he had a tough time processing the details of his son’s killing.

“How can you do that to another human being?” Jaggers said in a recent interview.

Jaggers’ parents said they plan to attend every court hearing in the case to ensure “that justice is served” in their son’s slaying.

“It’s going to be the hardest thing I’ve ever done in my life,” Jerry Jaggers told the newspaper.

An online fundraiser set up by Robinson for her son — who loved anime and martial arts — had garnered more than $5,600 as of Wednesday.

“Roy was so loving and friendly to everyone he met and the world is now short 1 amazing angel,” the website reads.

Pate, Dent and Mehn remain held without bail at the Nye County Detention Center on charges including murder and kidnapping. A preliminary hearing is set for Thursday, the Review-Journal reported.