Trump aide insists US does not face recession but shutdowns mount

The Trump administration on Sunday sought to downplay fears of a recession tied to the coronavirus pandemic, as Treasury secretary Steven Mnuchin said he believed the US would avoid a sharp economic downturn.

Coronavirus could expose the hollowness of America’s boom

In an interview on ABC’s This Week, Mnuchin acknowledged that the US economy would probably face a slowdown. But he insisted claims earlier in the week by Donald Trump’s former top economic adviser Gary Cohn that the economy was already in recession were incorrect.

“I don’t think so,” Mnuchin said. “The real issue is not the economic situation today … this is a unique situation. We are going to have a slowdown. Later in the year economic activity will pick up as we confront this virus.”

He added: “We will use whatever tools we need to make sure the economy and hardworking Americans get through this.”

“I would like to see a dramatic diminution of the personal interaction that we see in restaurants and in bars,” Fauci told CNN’s State of the Union, as he appeared to open the door to hardline measures similar to restrictions in a number of European countries. “Whatever it takes to do that, that’s what I’d like to see.”

“For a while, life is not going to be the way it used to be in the United States,” he said. “We have to just accept that if we want to do what’s best for the American public.”

The doctor appeared on all the main political talk shows, as the administration sought to provide public reassurance. On CNN, he was asked if it was possible that hundreds of thousands of Americans, or more, could die.

“Yes,” he said. “It is possible. Our job, our challenge is to try and make that not happen.”

Speaking to NBC, Fauci said: “Americans should be prepared that they are going to have to hunker down significantly more than we as a country are doing.”

A booming US economy is any incumbent president’s trump card when up for re-election. Market volatility around attempts to tackle the coronavirus outbreak has shown how exposed Trump could be in November. An NBC-Wall Street Journal poll released on Sunday showed the president losing match-ups with both Joe Biden and Bernie Sanders, the Democratic contenders set to debate in Washington.

The stock markets endured a tumultuous week as the Dow Jones plunged 10% on Thursday, its worst day since 1987, before rallying on Friday as Trump declared a national emergency and other measures meant to help combat the outbreak. The House then passed a sweeping relief bill, backed by Trump and negotiated by Mnuchin and Speaker Nancy Pelosi, which is expected to pass the Senate on Monday.

But Cohn argued on Friday that the spread of Covid-19 had already “curtailed consumer demand” and that it was “most likely … we are already in a recession”, a view shared by experts including Barack Obama’s former top economic adviser, Jason Furman. On Friday, he said that “at this point, this feels much worse than 2008”, the last global financial crisis.

The latest numbers from the federal Centers for Disease Control and Prevention (CDC), which have not been updated since Friday, document 1,629 confirmed US cases of Covid-19, with 41 fatalities. Other estimates are higher and most experts think thousands of cases have not been diagnosed, in part because of a slow start to government-run testing.

Mnuchin’s renewed confidence in the resilience of the US economy came in the face of state and local leaders mandating policy designed to limit exposure to the virus. Eighteen states, for example, have announced some form of statewide school closure.

In Illinois, schools will be closed from 17 March until the end of the month and major St Patrick’s Day celebrations over the weekend were severely curtailed. On Sunday, Governor JB Pritzker, a Democrat, issued stinging criticism of Trump’s handling of the crisis.

“We [state governors] are the ones who’ve had to provide the leadership because the federal government just has fallen down on this,” he told NBC’s Meet the Press. 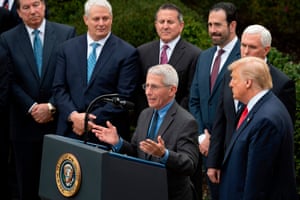 Ohio governor Mike DeWine, a Republican, has closed schools until 3 April. He said his administration was considering closing all bars and restaurants.

“We are certainly looking at that,” he said, also on NBC. “You know, we started off last week closing the schools. We reduced the number of people gathered together to 100. You know, we have restricted access to our nursing homes, to our prisons. So we are taking tough steps … Every day counts so much and you just cannot wait.”

Coronavirus: governor tells Trump to ‘get shit together’ amid airport chaos

On Saturday Florida governor Ron DeSantis, a Republican, urged the White House to consider restricting domestic travel, after a fourth Covid-19 death in his state.

“We’re seeing cases where people clearly contracted it somewhere else and brought it here,” DeSantis said.

The comments came shortly after Trump – who was tested for coronavirus on Friday and found to be in the clear – expanded a Europe-wide travel ban to include the UK and Ireland, and cautioned that the administration was considering other domestic restrictions.

On ABC, Fauci said: “Travel restrictions within the country have not been seriously discussed. I don’t see that now in the immediate future.”