Donald Trump’s animated defense attorney Michael van der Veen angrily stormed out of his interview with a CBS News reporter on Saturday after he put on a voice to mimic her and claimed she ‘didn’t understand the case.’

Van der Veen prematurely ended his interview by ripping off his microphone and dropping it on the floor after suggesting CBSN anchor Lana Zak was making light of Democrats presenting ‘doctored’ evidence.

During the fifth and final day of the impeachment trial on Saturday, where Trump was ultimately acquitted, van der Veen remained defensive of his client.

‘You have won the acquittal of your client,’ Zak said.

Van der Veen interjected, with his arms crossed: ‘Yes I did.’

‘And if you would like to continue to talk about this conversation we can continue to do that,’ she said. ‘But for me to ask a question to clarify for our viewers what you’re talking about is a fair question.’

‘A slanted question that was set up to say, ‘It’s OK for them to cheat.’ That was your question, ‘Isn’t it OK for them to cheat. It’s just a little bit.’ You said, ‘To be fair, it was only a check on the Twitter.’ That’s what you said,’ van der Veen said, snarling on his face and using a more high-pitched, sing-songy voice to mimic the anchor.

‘You gotta live by your words,’ he said. ‘That’s the problem – the media has to start living by the truth. And not try to create a narrative.’ 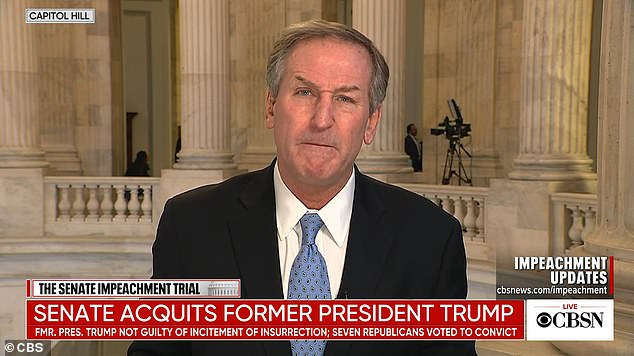 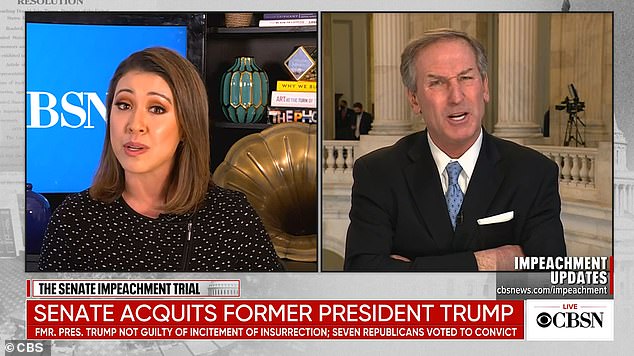 The attorney told CBSN anchor Lana Zak that she ‘didn’t understand the case’ and was downplaying Democrats ‘doctoring’ evidence. He also mimicked Zak by using a more high-pitched and sing-songy voice 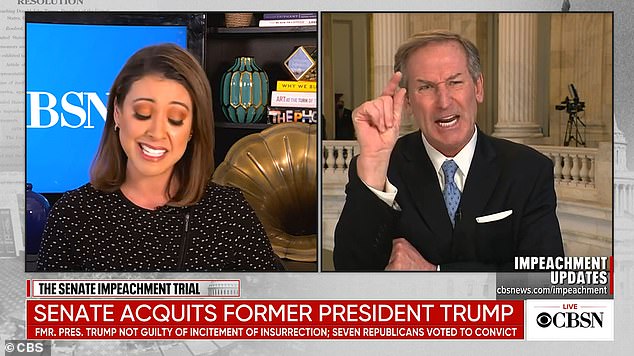 ‘You gotta live by your words,’ van der Veen said as he went on a rant tearing into the media. ‘That’s the problem – the media has to start living by the truth. And not try to create a narrative’ 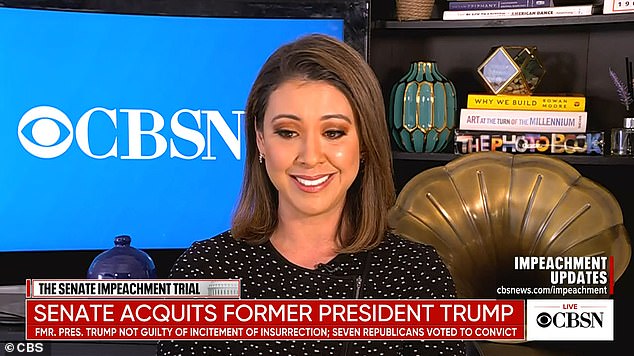 ‘Yup, citizen,’ he said, angrily looking away from the camera as he stood in the Capitol following the acquittal of his client.

‘I do appreciate –’ she said, as van der Veen took off his own microphone and said, ‘yup,’ again.

‘Ok, I see you taking off your microphone now,’ Zak said as van der Veen is seen dropping the microphone onto the floor accompanied by the sound of it making impact. ‘That was President Trump’s defense attorney.’

Van der Veen said earlier in the interview that Democrat did not deny that they presented ‘doctored’ evidence by showing a tweet that incorrectly displayed a blue verification check mark, showed that it was sent in the year 2020 instead of 2021 and other ‘selective editing’ of tapes.

‘It’s not OK to doctor a ‘little bit’ of evidence,’ he continued.

‘The media has to start telling the right story in this country,’ he said. ‘The media is trying to divide this country. You are bloodthirsty for rating, and as such you are asking questions now that are already set up with a fact pattern.’

‘Your coverage is so slanted it’s got to stop. You guys have to stop and start reporting more like PBS does rather than a TV news show that doesn’t have any journalistic integrity at all.’

Van der Veen made headlines several times throughout the defense’s presentation over the last week, including on Saturday when the Senate chamber erupted in laughter when he pronounced Philadelphia as ‘Philly-delphia.’

The attorney’s private home was also vandalized on Friday with graffiti hours before the former president’s historic acquittal.

Vandals painted the word ‘Traitor’ in large red letters at the entrance to Van der Veen’s suburban Philadelphia home, with an arrow pointing to his house.

The graffiti was reported around 8:00 p.m. on Friday, according to Detective Scott Pezick of the West Whiteland Township Police Department in Chester County.

Van der Veen’s home, in suburban Philadelphia, was defaced with the word ‘Traitor’ on Friday 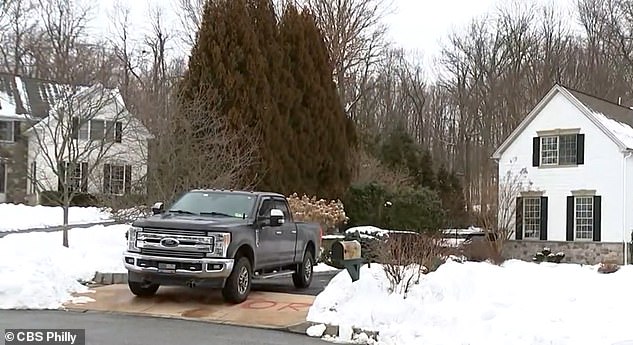 Video shows the word ‘traitor’ spray painted in red on the driveway, with an arrow pointing to the home 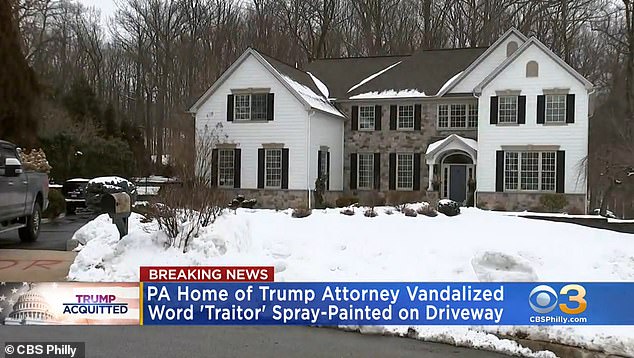 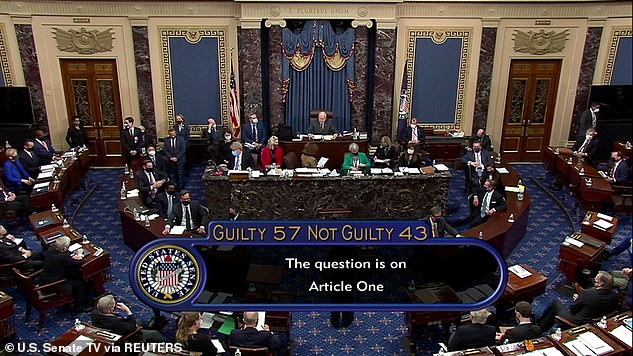 Hours after the vandalization, the Senate voted to acquit Trump after House impeachment managers decided not to call witnesses

Pezick said Saturday no arrests have been made yet, adding that the home now has private security detail.

“We’ve been showing a police presence to deter anything from happening,” he added.

After the acquittal Saturday, Van der Veen said his home was attacked as the trial was ongoing and that his business is ‘under siege.’

‘My home was attacked, I’d rather not go into that. To answer your question, my entire family, my business, my law firm are under siege right now. I don’t really want to go into that though,’ he said.

A group of demonstrators gathered at some point outside van der Veen’s law office in downtown Philadelphia, calling him a ‘fascist’ and chanting, ‘When van der Veen lies, what do you do? Convict. Convict,’ the Philadelphia Inquirer reported.

Mike van der Veen, during impassioned remarks from the Senate floor during the fifth day of impeachment trial, pronounced his hometown Philadelphia with an accent, which sparked prolonged laughter from the lawmakers.

He also said if House managers call witness depositions, then he would ‘slap subpoenas on a good number of people.’

Trump’s senior adviser Jason Miller said Saturday they have a list of 301 witnesses they would like to call – and he said that number is growing.

‘For the House managers to say we might need depositions about things that happened after, it is just not true. But, if he does, there are a lot of depositions that need to be happening,’ van der Veen said of House impeachment managers lead Jamie Raskin if he goes forward with calling for depositions on the events following the storming of the Capitol on January 6.

‘And not by Zoom. None of these depositions should be done by Zoom,’ van der Veen asserted, raising his voice and banging his hand on the podium. ‘We didn’t do this hearing by Zoom.’

‘These depositions should be done in person in my office in Philadelphia,’ he continued with a snarl on his face, using the pronunciation ‘Philly-delphia’. ‘That’s where they should be done.’

At this point, senators on both sides of the chamber burst out into laughter. 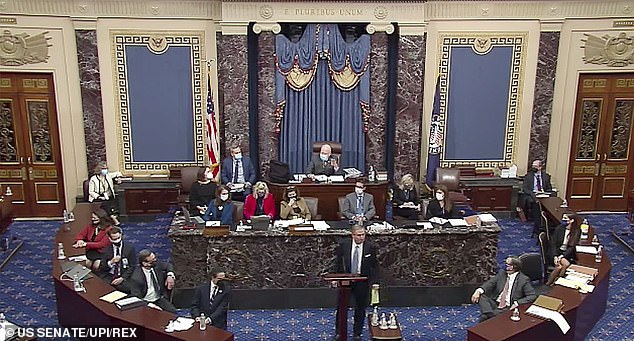 At one point during the proceedings Saturday, the Senate chamber exploded in laughter after Trump’s defense attorney pronounced his hometown of Philadelphia as ‘Philly-delphia’ 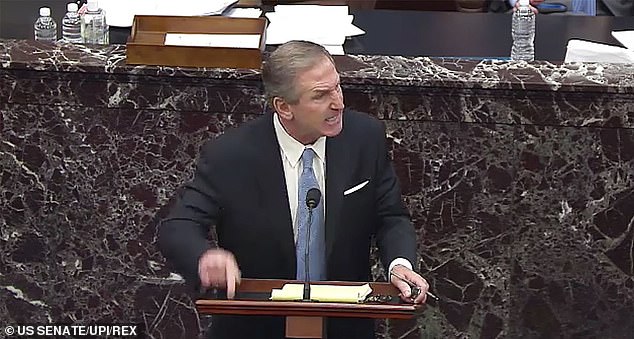 During a fiery speech on the Senate floor Saturday, van der Veen sparked chamber-wide laughter with his pronunciation as he banged on the podium and snarled 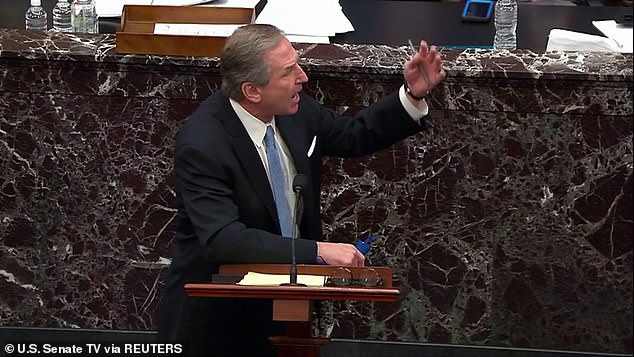 The Pennsylvania-based attorney was demanding that if Democrats called for depositions in the impeachment trial, than House Speaker Nancy Pelosi and Vice President Kamala Harris should give their own in-person at his Philadelphia office 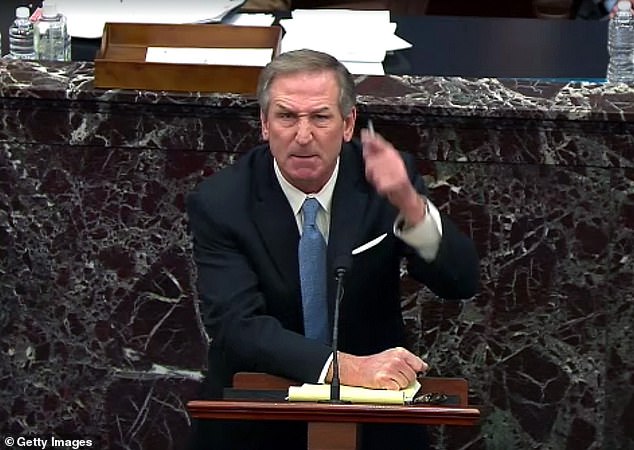 ‘I don’t know why you’re laughing,’ he said, appearing to think the laughter was related to his legal argument. ‘It is civil process. That is the way lawyers do it’ 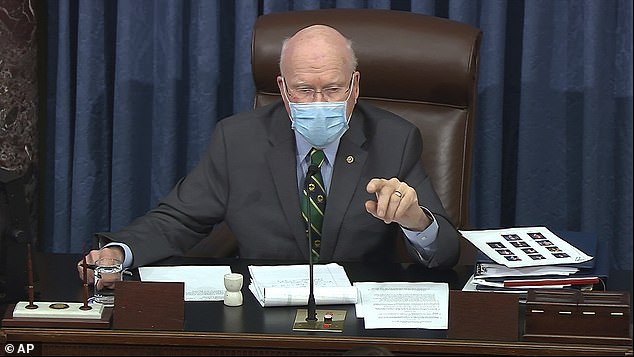 ‘I don’t know how many civil lawyers are here, but that’s the way it works, folks,’ van der Veen said in explanation, appearing confused over the laughs. ‘When you want somebody’s deposition, you send a notice of deposition, and they appear at the place where their notice says, that’s civil process.’

‘I don’t know why you’re laughing,’ he said. ‘It is civil process. That is the way lawyers do it, we send notices of deposition –’

Van der Veen was then interrupted by Senate President pro tempore Patrick Leahy who called the chamber back to order as the bipartisan laughter persisted.

‘I would remind everybody that we will have order in the chamber during these proceedings,’ the Democratic Senate leader said.

‘I haven’t laughed at any of you, and there’s nothing laughable here,’ van der Veen said.

Before the trail kicked off on Tuesday, Raskin sent a letter demanding Donald Trump appear to testify in the proceedings, to which the former president’s lawyers rejected.

‘He mentioned my client coming in to testify, that is not the way it’s done,’ van der Veen lamented during his fiery remarks Saturday. ‘If he wanted to talk to Donald Trump, he should have put a subpoena down. Like I’m going to slap subpoenas on a good number of people if witnesses are what is required here for them to try and get their case back in order, which has failed miserably.’ 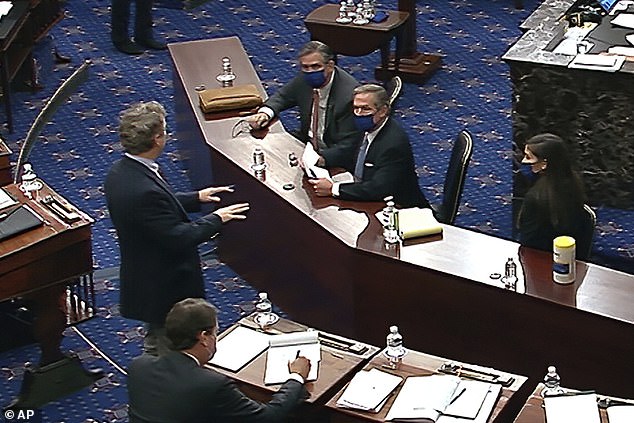 Following the ordeal, and as the Senate voted on whether to call witnesses, Republican Senator Rand Paul is seen talking to van der Veen and lead impeachment attorney Bruce Castor – also based in Pennsylvania

‘We’re currently at 301 and counting…’ he tweeted of the witness count after Trump ally Senator Lindsey Graham voted in favor of calling witnesses.

Graham tweeted after the vote: ‘It is my firm belief that the House Managers are trying to investigate the case AFTER it was brought to the Senate. It is better for the country to go to a final vote.’

‘However, if the body wants witnesses,’ he continued in a thread, ‘I am going to insist we have multiple witnesses.’

‘We can start with Speaker Pelosi to answer the question as to whether or not there was credible evidence of pre-planned violence before President Trump spoke?’ he said.

The South Carolina senator added: ‘Her testimony is incredibly relevant to the incitement charge.’

While even Republicans chuckled at van der Veen’s suggestion some of the top Democratic leaders appear in-person at his Philadelphia, Pennsylvania office for depositions, the interruption from Democratic senators continued through Leahy calling order.

Pennsylvania’s Republican Senator Pat Toomey was seen by reporters in the chamber gallery giving a hearty laugh to the suggestion while chatting with seat mate Kevin Cramer, Republican senator from North Dakota. 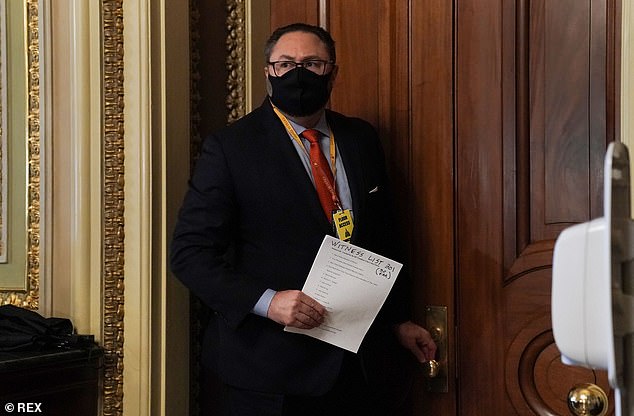 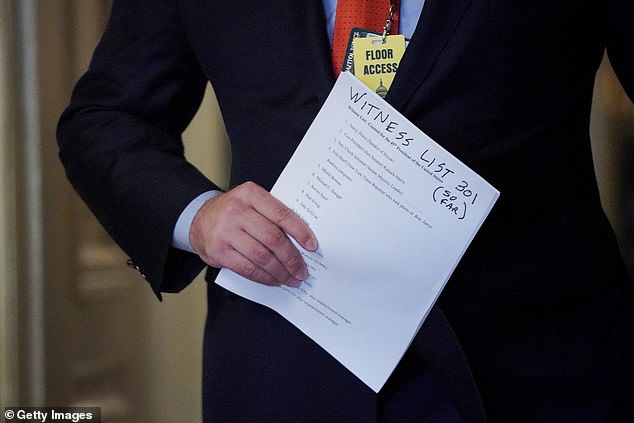 There were a few times on Saturday when van der Veen incited laughter.

A few minutes before saying Pelosi and Harris should be deposed at his office, the animated attorney was yelling about how there are multiple reasons Donald Trump should be acquitted.

‘Let me take my own advice and cool the temperature in the room a little bit,’ he suddenly said calmly after shouting his previous point.

He was greeted with a few chuckles from the chamber.