PRESIDENT Donald Trump defended his use of the phrase 'Chinese virus' to reference the coronavirus, claiming the term is "not racist."

Trump opened up a White House briefing on Wednesday by saying he had "important developments in our war against the Chinese Virus," leading one reporter to question why he's repeatedly used the phrase.

He told reporters he used the description because the virus originated in Wuhan, China before stressing that the expression is "not racist at all."

"It's not racist at all," Trump reasoned.

Although Trump argued the coronavirus originated in China, he doesn't believe Beijing forced it on the US.

He claimed he wasn't being racist to any Asian-Americans with the term.

Hours before the press conference, Trump tweeted about taking the 'Chinese Virus' seriously while patting his administration on the back for deciding to bar Chinese foreigners from entering the US.

"I always treated the China Virus very seriously, and have done a very good job from the beginning, including my very early decision to close the "borders" from China – against the wishes of almost all," he tweeted Wednesday morning. 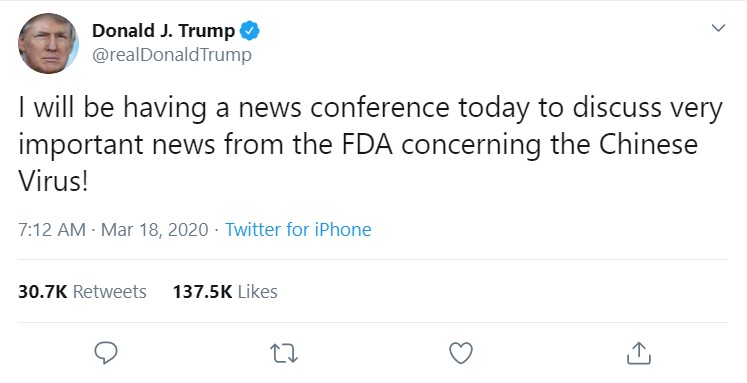 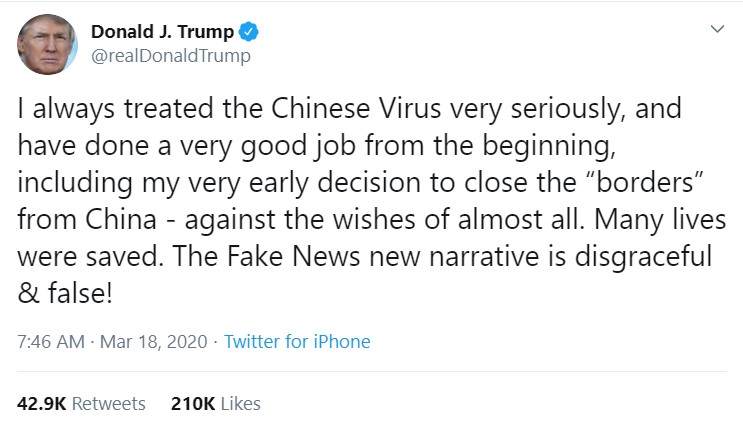 "Many lives were saved. The Fake News new narrative is disgraceful & false!"

He didn't condemn a White House official who called the disease 'Kung-Flu' and said he wasn't worried about Asian-Americans being at risk of xenophobic attacks because of such rhetoric.

CBS News correspondent Weijia Jiang claimed on Twitter Tuesday that a White House official openly referred to the coronavirus as the "Kung-Flu" in her presence.

"This morning a White House official referred to #Coronavirus as the "Kung-Flu" to my face," Jiang wrote.

"Makes me wonder what they're calling it behind my back."

Trump's comments have been slammed as racist amid ongoing tensions between the US and Beijing.

Although the president doesn't believe Asian-Americans will be subject to racist attacks, Asians around the world have been the target of xenophobia.

Earlier this month, a 23-year-old student from Singapore was battered on a London street by racist thugs who yelled: "I don't want your coronavirus in my country."