Washington: President Donald Trump has now made it unmistakably clear in recent weeks — and even more crystal clear at Wednesday night's debate — that there are only two choices before American voters November 3 — and electing Joe Biden is not one of them.

The president has told us in innumerable ways that either he will be reelected or he will delegitimise the vote by claiming that all mail-in ballots — a time-honoured tradition that has ushered Republicans and Democrats into office and has been used by Trump himself — are invalid. 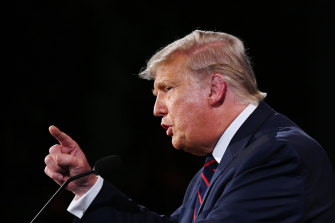 Either victory or an attack on the election: US President Donald Trump.Credit:Bloomberg

Trump's motives could not be more transparent. If he does not win the Electoral College, he’ll muddy the results so that the outcome can be decided only by the Supreme Court or the House of Representatives (where each state delegation gets one vote). Trump has advantages in both right now, which he has boasted about for the past week.

I began my career as a foreign correspondent covering Lebanon's second civil war, and it left a huge impact on me. I saw what happens in a country when everything becomes politics, when a critical mass of politicians put party before country, when responsible people, or seemingly responsible people, think that they can bend or break the rules — and go all the way — and that the system won't break.

But when extremists go all the way, and moderates just go away, the system can break. And it will break. I saw it happen.

I worry because Facebook and Twitter have become giant engines for destroying the two pillars of our democracy — truth and trust. Yes, these social networks have given voice to the voiceless. That is a good thing and it can really enhance transparency. But they have also become huge, unedited cesspools of conspiracy theories that are circulated and believed by a shocking — and growing — number of people.

These social networks are destroying our nation's cognitive immunity — its ability to sort truth from falsehood.

Without shared facts on which to make decisions, there can be no solutions to our biggest challenges. And without a modicum of trust that both sides want to preserve and enhance the common good, it is impossible to accomplish anything big. 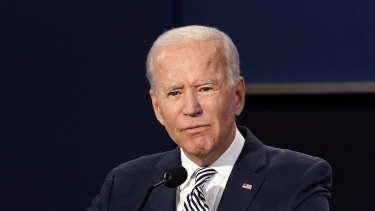 Admittedly, Biden did not particularly shine in Tuesday night's debate. Alas, I have never seen him shine in any debate. But I have no doubt that the people, values and integrity he would bring into government would be of a quality that the nation deserves.

If Trump's performance left you feeling that you want four more years of his presidency — that he will respect the outcome of the elections if it goes against him, that he will reunite the county, that he will do the presidency proud and surround himself with people of the quality that the country deserves — then you and I were watching different debates.

To get back a semblance of unity and sanity, Biden has to win. And that is why I have only one answer to every question now: Vote for Biden — do it by mail early if you must, but if you can, please, put on a mask and do it in person. If enough of us do that, Biden can win outright with the votes cast on Election Day, instead of waiting for all the mail-in ballots to be counted, thereby giving time for Trump and Fox News to muddy the outcome.

Do it as if your country's democracy depends on it, because it does.