Two Britons captured by Russian forces 'are sentenced to death'

Two British men and a Moroccan man held by Russian forces in Ukraine have been sentenced to death, Russian state-media has reported.

Shaun Pinner, 48, and Aiden Aslin, 28 – along with Moroccan national Saaudun Brahim – were all captured while fighting in Ukraine.

The three men said they will appeal the decision, Tass reported. The court is not internationally recognised, the BBC said.

‘The Supreme Court of the DPR passed the first sentence on mercenaries – the British Aiden Aslin and Sean Pinner and the Moroccan Saadun Brahim were sentenced to death, RIA Novosti correspondent reports from the courtroom,’ RIA said on Telegram.

This is a breaking news story. More to follow… 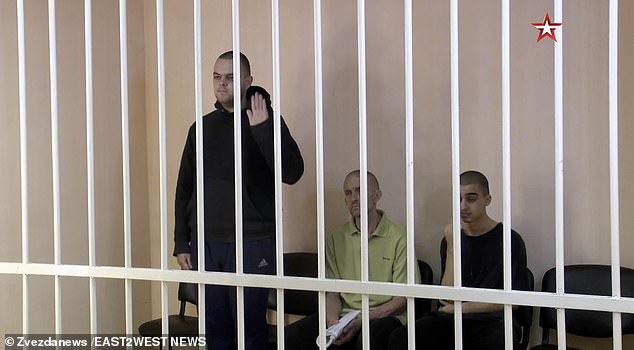 Shaun Pinner, 48, and Aiden Aslin, 28 – along with Moroccan national Saaudun Brahim – were all captured while fighting in Ukraine. Pictured: The three are seen in footage

Aslin and Pinner were detained in April while fighting in Ukraine, before reportedly appearing in court in the separatist Donetsk People’s Republic (DPR) on Wednesday.

They are said to have admitted ‘training in order to carry out terrorist activities’.

In footage shared by Ria Novosti on social media on Wednesday, a translator can be heard asking Mr Aslin if he would ‘plead guilty’ to an offence, to which he replied: ‘Yes.’

Ria Novosti reported yesterday that the charge carries a term of 15 to 20 years’ imprisonment with restriction of freedom for a term of one to two years or life imprisonment.

The video appeared to show the two Britons in the dock in the pro-Russian territory’s supreme court alongside a third man, reported to be Mr Brahim.

On Wednesday, the Foreign Office condemned the exploitation of prisoners of war for political purposes in the wake of the footage being released, and said it was working with the Ukrainian government on the issue of British captives.

The MP condemned the ‘trumped-up charges’ faced by both Britons and accused Russia of a ‘completely outrageous breach of international law’.

Mr Jenrick told BBC Radio 4’s World At One programme: ‘This is a British citizen, but who also holds Ukrainian nationality, is married to a Ukrainian, joined the Ukrainian armed forces in the normal way prior to (Vladimir) Putin’s illegal invasion, and has been serving in the armed forces.

‘He was taken prisoner by Russian forces and in accordance with international law and the Geneva Convention, he should be being held appropriately and returned to Ukraine at the earliest possible opportunity, possibly through a prisoner exchange.

‘Instead of that Putin’s regime have chosen to put him and another British national, Shaun Pinner, on trial on trumped up charges, no evidence whatsoever. This is, I’m afraid, a completely outrageous breach of international law and it should be condemned.’ 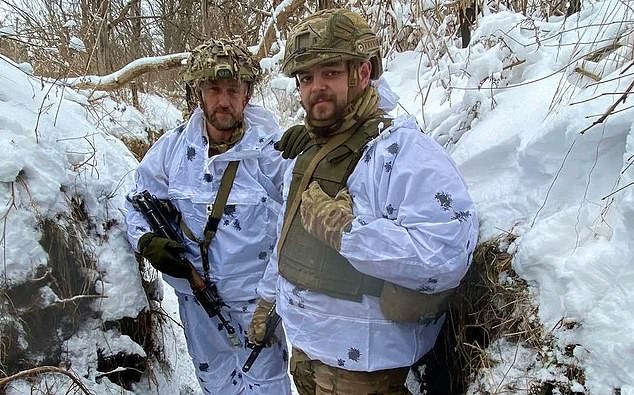 Aiden Aslin (right) and Shaun Pinner (left) were detained in April while fighting in Ukraine, before reportedly appearing in court in the separatist Donetsk People’s Republic (DPR)

He added: ‘What I hope happens is that a prisoner exchange occurs in the near future. The Russian authorities have chosen to make an example out of these two British nationals and it is, I think, completely shameful.’

On Monday, Dominic Raab said the Foreign Office will ‘make all the representations’ on Mr Aslin’s behalf and his family have also issued an emotional statement calling for his release.

They said: ‘We, the family of Aiden Aslin, wish to ask for privacy at this time from the media. This is a very sensitive and emotional time for our family, and we would like to say thank you to all that have supported us.

‘We are currently working with the Ukrainian government and the Foreign Office to try and bring Aiden home. Aiden is a much-loved man and very much missed, and we hope that he will be released very soon.’

A Foreign Office spokesperson said: ‘We are working with the government of Ukraine on the detention of British Nationals.

‘We condemn the exploitation of Prisoners of War for political purposes. They are entitled to combatant immunity and should not be prosecuted for participation in hostilities.’