Two Extinction Rebellion protesters who stopped millions of newspapers from being delivered have been convicted of obstruction.

Elizabeth Haughton, 26, and Frances Henderson, 23, are the latest activists to be punished over the demonstration outside the Newsprinters plant in Knowsley, Merseyside, in September 2020.

The 11-hour protest was part of a night of chaos at Knowsley and another site in Broxbourne, Hertfordshire.

The action prevented 1,100 shops from receiving newspapers, including the Daily Mail, The Sun and The Daily Telegraph, and cost publishers £1.2million.

The Prime Minister told those responsible that it was ‘completely unacceptable to seek to limit the public’s access to news in this way’.

Liverpool magistrates’ court heard Haughton and Henderson handcuffed themselves together before supergluing themselves to a van parked across an entrance gate to the plant.

District Judge Timothy Boswell told the pair that their right to protest ‘went too far’ and handed them a two-year conditional discharge.

The women were ordered to pay a total of £600 prosecution costs, plus a £22 surcharge. 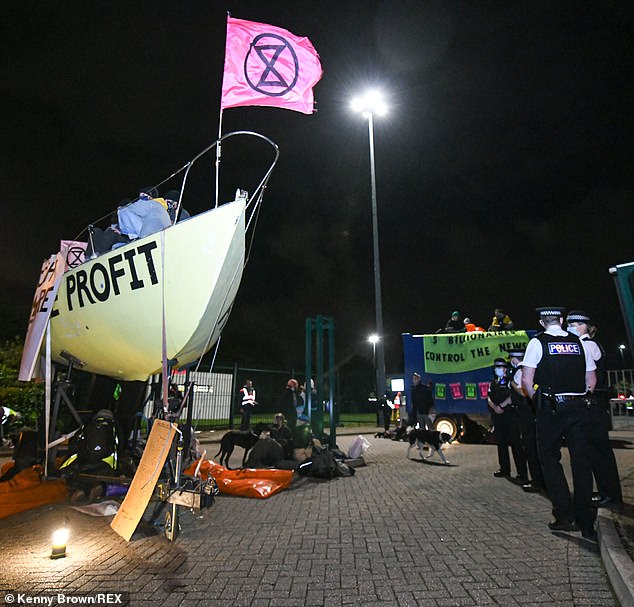 The protest, pictured, as Extinction Rebellion block the road in Knowsley, Liverpool to prevent papers going to print at a News Corp plant

Several other demonstrators, charged with trespass, who locked themselves to a yellow boat and van outside the depot previously escaped any punishment on a technicality last year.

Their lawyers successfully argued that prosecutors couldn’t be sure if they were situated on public or private land and they were allowed to walk free, but the Crown are appealing the decision at a hearing at London’s High Court in June.

During a two-day trial this week, barristers for Haughton and Henderson disputed that the van had been parked on a public highway, saying the women believed the van was on private land, therefore they were not blocking public access.

Mark Pritchard, for Haughton, suggested the activists simply inconvenienced several lorry drivers, adding: ‘We are not here to protect the financial rights of individuals…if the newspaper proprietors wish to bring a civil claim for £1million (losses) they have a right to do so.’ 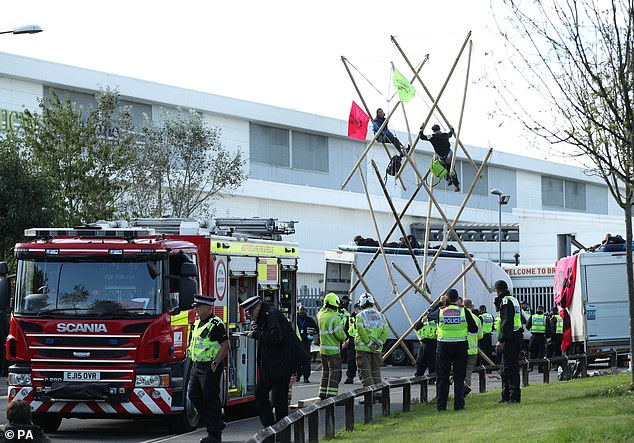 Police and fire services watch as protesters use bamboo lock-ons and vans to block the road outside the Newsprinters printing works at Broxbourne, Hertfordshire in September 2020

But the court heard that as many as 100 lorries were unable to leave the plant, owned by News International, with many drivers left feeling anxious by the demonstration.

District Judge Timothy Boswell told the pair he recognised it had been a ‘peaceful protest’ but found them guilty.

The judge said was satisfied the van had been parked on a public highway, and although ‘their motivation was seeking to exercise their right of protest they went too far.’

Defence counsel Miss Hall said that Henderson, who has no previous convictions, and Haughton, who has one conviction for criminal damage in August 2019, are not working and have no fixed address.

Haughton ‘relies on a van’ for accommodation, Miss Hall said, while Henderson sofa surfs with friends. Both women, who were dressed in ripped jeans and had several piercings, do not claim state benefits. 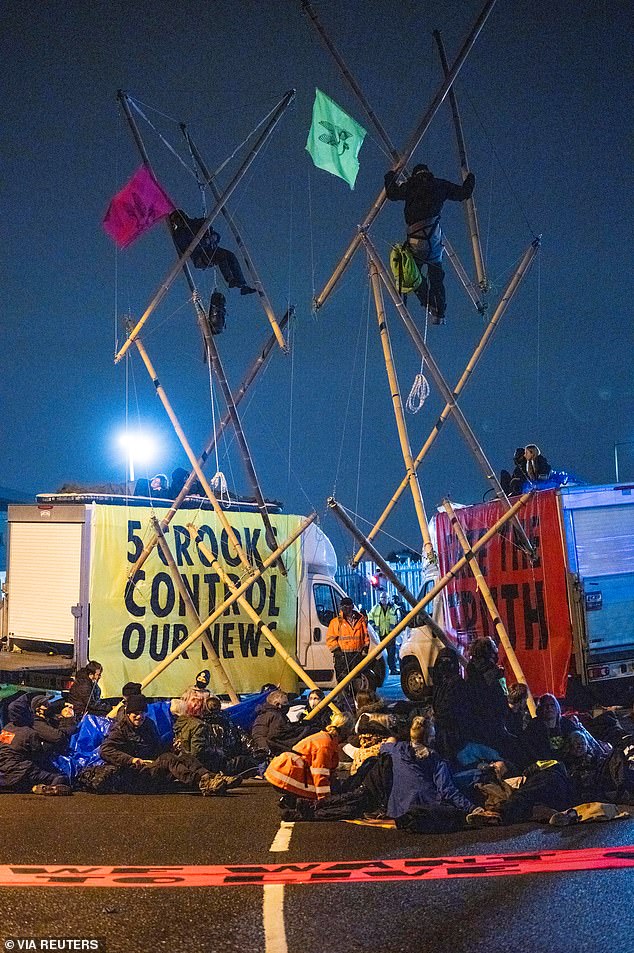 A student climate activist, she was arrested for obstruction in November 2018 when she took part in an Extinction Rebellion protest that blocked Manchester’s Oxford Road. She and nine others sat on a pedestrian crossing holding a banner which read: ‘We’re all f*****’.

Haughton also glued herself to a Barclays Bank as part of another blockade the following September. She was also given access to the university’s Alumni Instagram page on graduation day – but hijacked the privilege by filling the feed with posts encouraging the university to stop investing in firms linked to fossil fuels.

Henderson, of Manchester, was previously cleared of obstruction, in October 2019, when she was among a number of Extinction Rebellion protestors who glued their hands to the road as part of a mass demonstration, in Millbank, near the HQ of MI5.