Typhoon Noru batters the Philippines: More than 8,000 are evacuated from homes as downpours and 120mph gusts topple trees and rip up power lines laying waste to islands

More than 8,000 people in the Philippines have been evacuated from their homes as the islands are battered by a Typhoon bringing with it 120mph winds and torrential rain that is toppling trees, ripping up power lines and laying the country to waste.

Nearly 8,400 people have been pre-emptively evacuated from Noru’s path, with winds toppling trees, taking out power lines and causing up to three-metre high storm surges.

The category 3 tropical storm’s maximum sustained winds have been recorded as 121mph after making landfall, the state weather agency said. 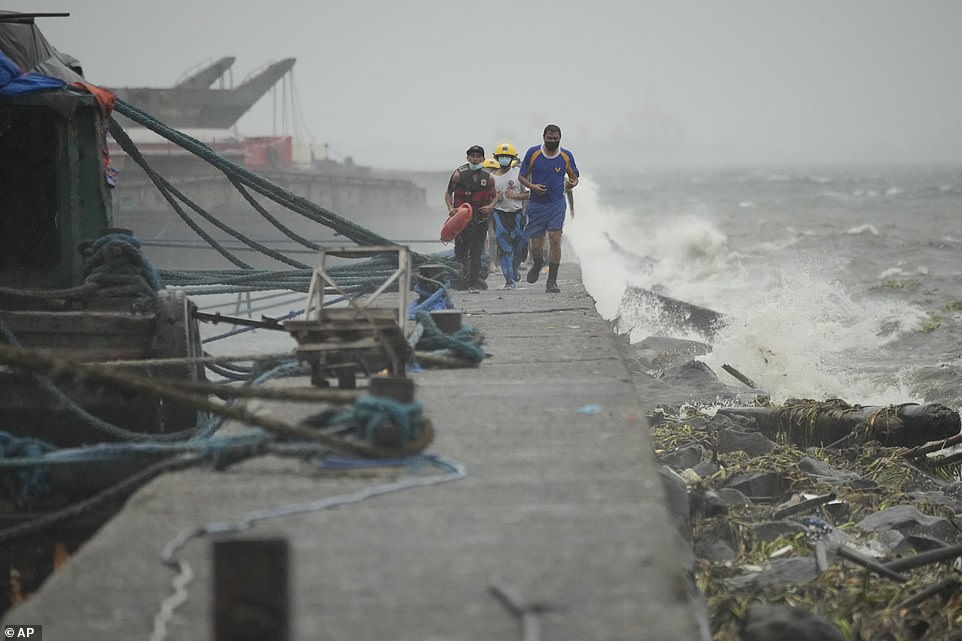 Rescuers run as they check residents living at the seaside slum district of Tondo while Typhoon Noru approaches Manila, the capital of the Philippines, today 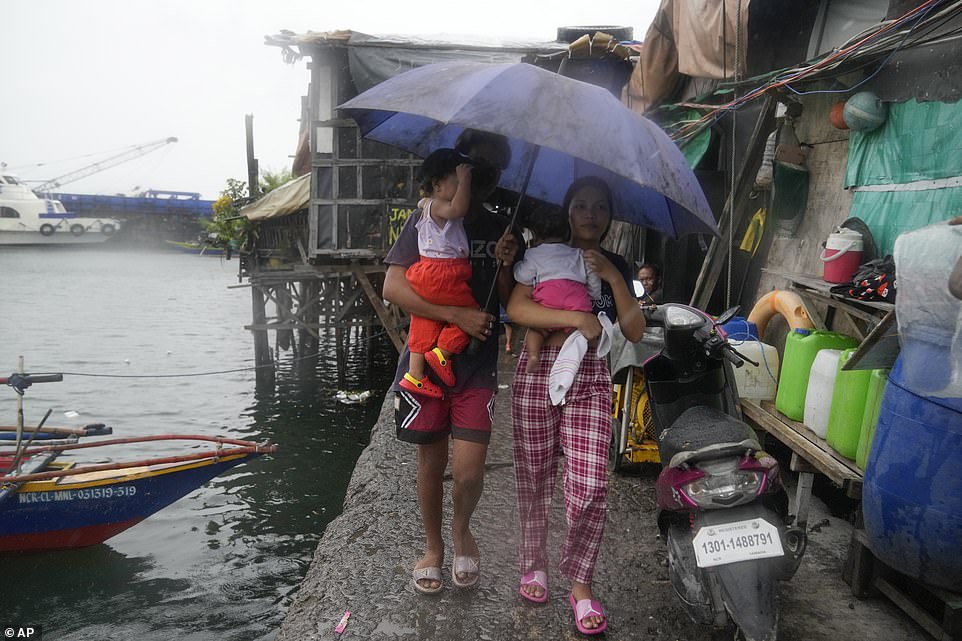 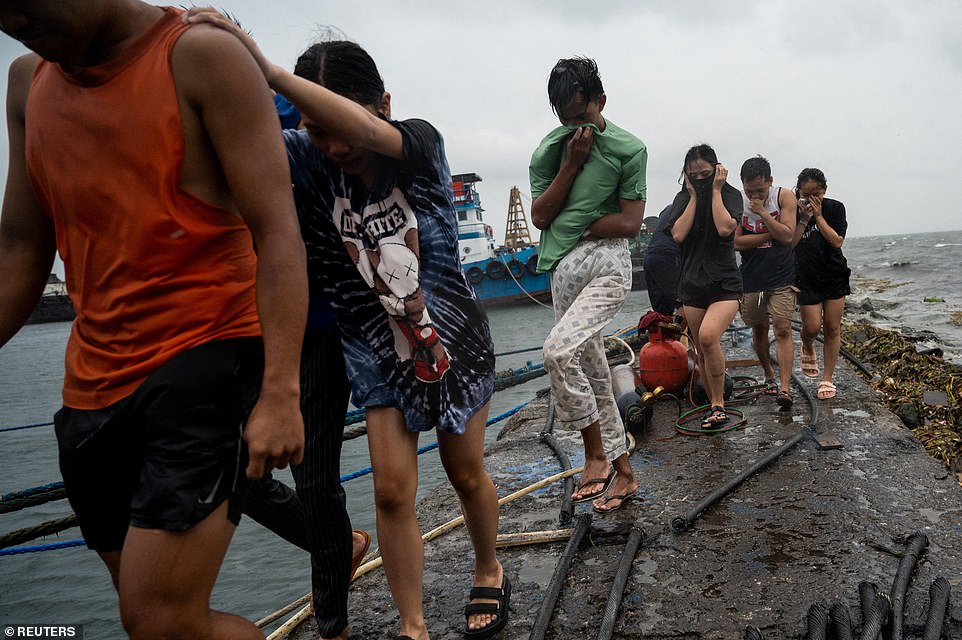 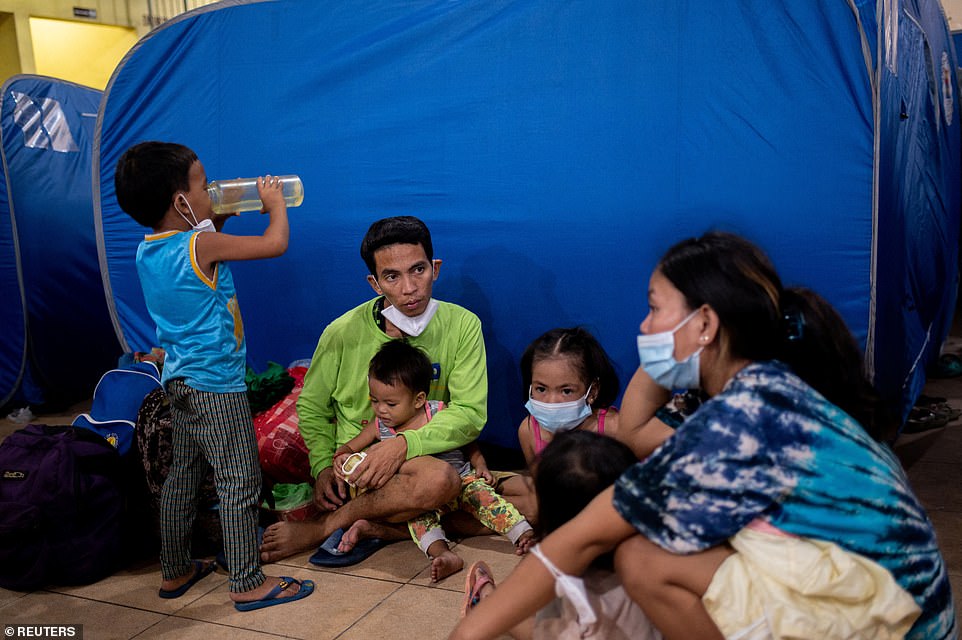 A young family takes shelter at an evacuation centre in Manila, in preparation for the Super Typhoo

Noru, the strongest storm to hit the Philippines this year, made landfall in the northeast, on the Burdeos municipality on the Polillo islands, part of Quezon province, at 5.30pm local time, 9.30am GMT.

It made landfall about 100 kilometres northeast of the capital, Manila, and emergency personnel braced for the possibility of strong winds and heavy rain battering the city, home to more than 13 million people.

The weather bureau issued warnings late on Sunday night for ‘serious flooding’ in vulnerable areas of Manila and nearby provinces as Noru dumped heavy rain.

Forced evacuations have been underway in some high-risk areas of the capital, including impoverished communities living in flimsy shacks along rivers and near the sea. 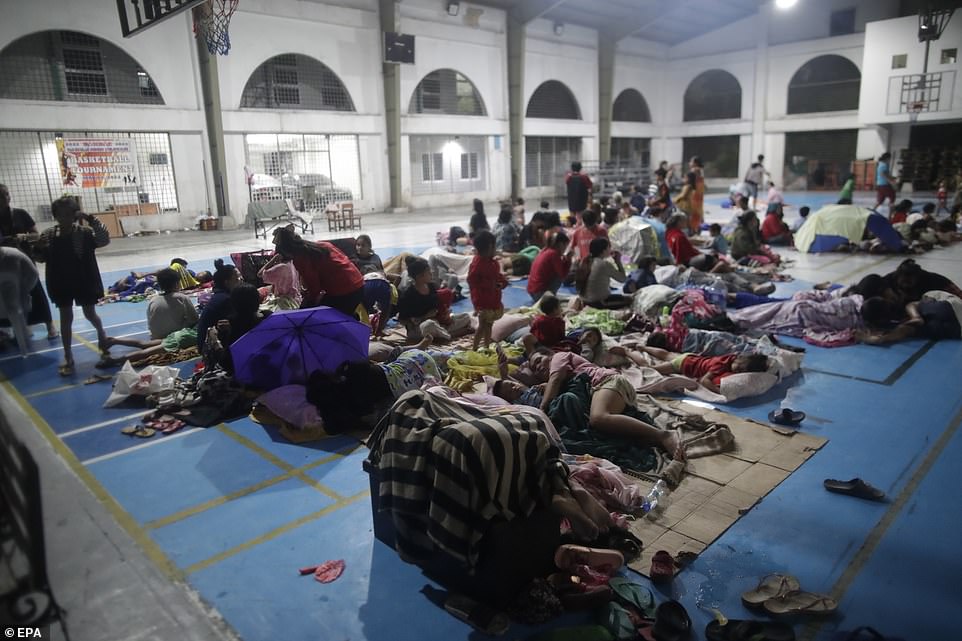 Pictured: Evacuees rest inside a gymnasium turned into a temporary evacuation center in Manila 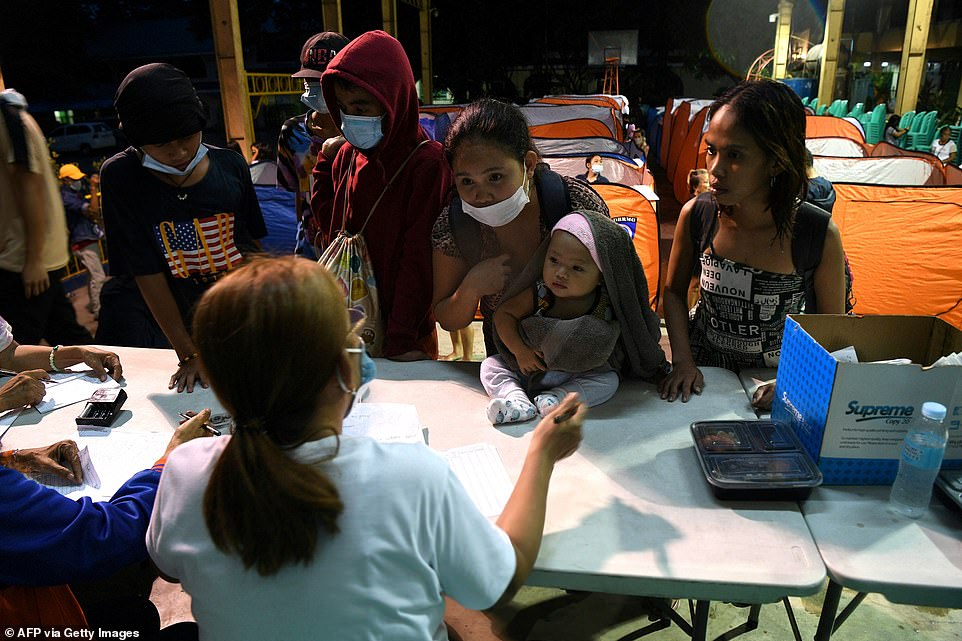 A family with their belongings arrive at an evacuation centre in Quezon city. Families have fled their homes with often very few belongings to take shelter in safer communal buildings

Residents in Tondo, a slum district of Manila which is on the seafront, were pictured carrying their children as they evacuated to safer grounds before the storm hit.

Gloria Perez, 68, was part of a group sheltering in modular tents set up on a covered basketball court.

‘I evacuated the house where I’m living in because I’m scared, the flood there gets really high,’ Perez said.

‘I don’t want a repeat of what happened to me before.’ 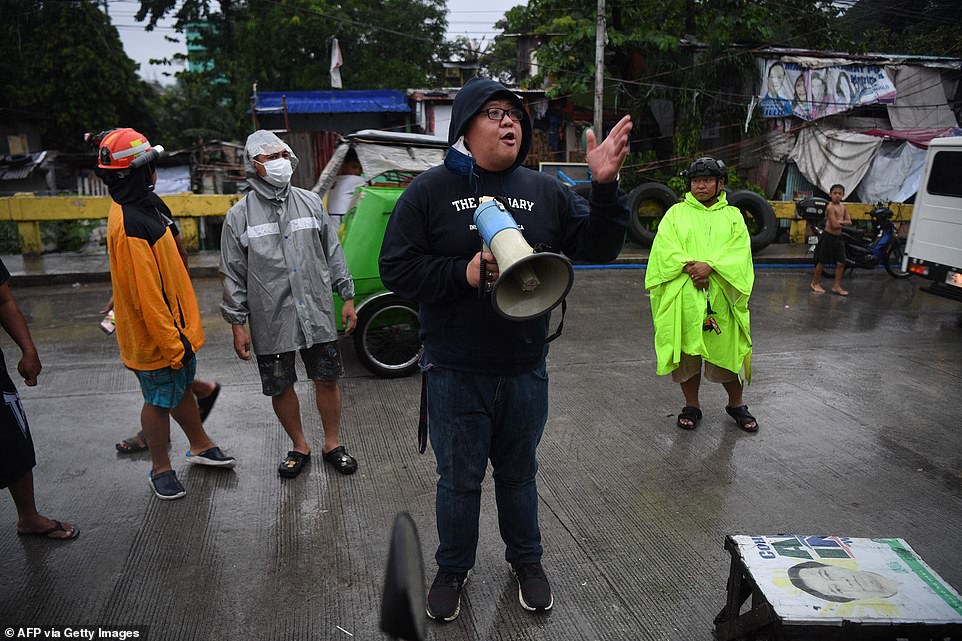 A village officer talks to residents near a creek in Quezon city. Forced evacuations have been underway in some high-risk areas of the capital

‘The winds were fierce this morning,’ said Ernesto Portillo, 30, who works as a cook in the coastal municipality of Infanta in Quezon.

‘We’re a bit worried… We secured our belongings and bought a few groceries so we have food just in case.’

Noru, known locally in the Phillipines as Typhoon Karding, is expected to enter the South China Sea on Monday and head towards Vietnam.

‘Typhoons are like engines – you need a fuel and an exhaust to function,’ said weather forecaster Robb Gile. 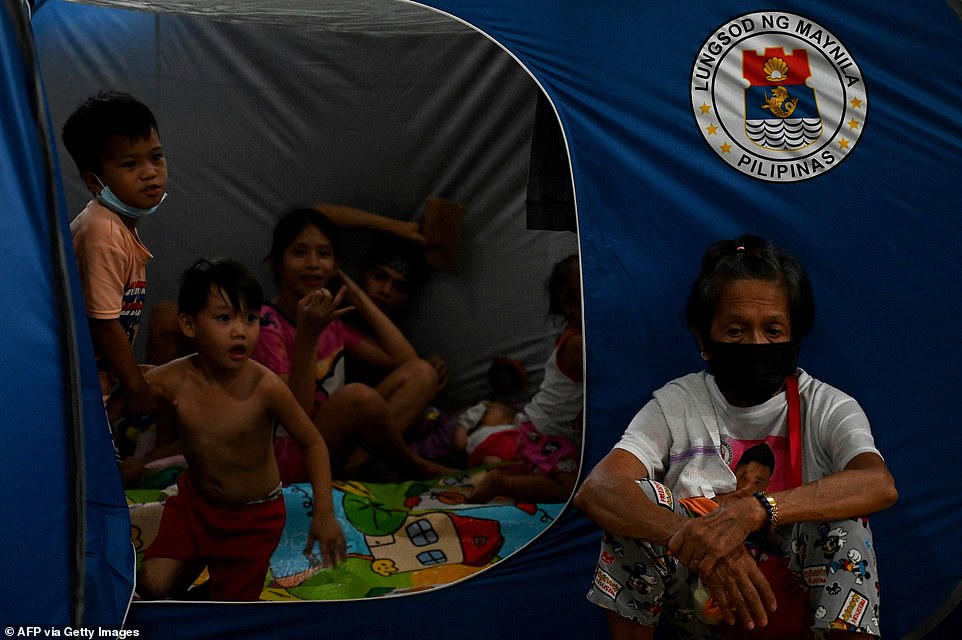 A young family taking shelter in a modular tent at an evacuation centre in Baseco, Manila as Typhoon Noru approached the Philippines 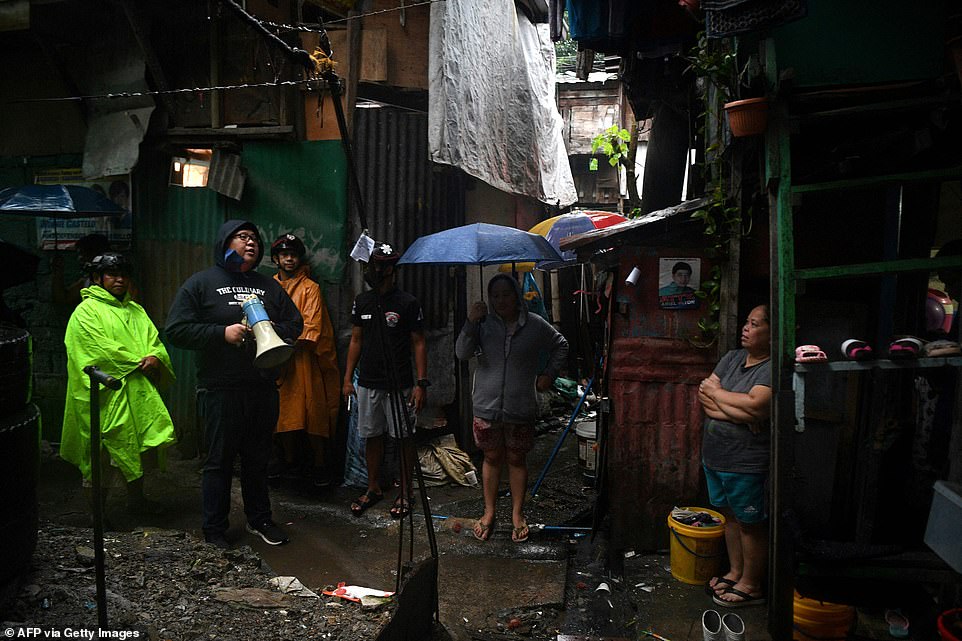 Residents speaking to a village officer outside their homes, with one taking shelter from the downpours with an umbrella 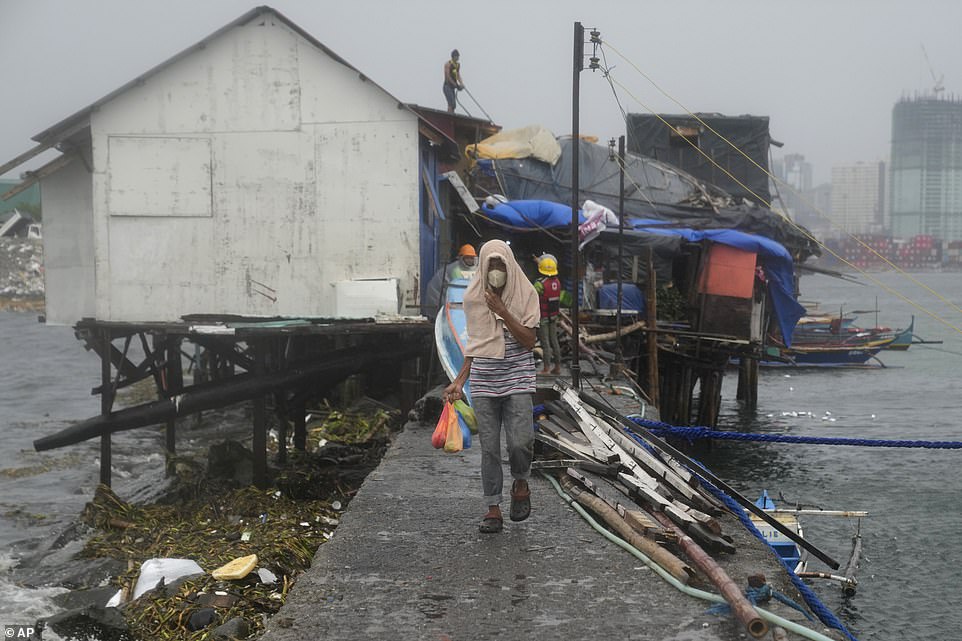 ‘In the case of Karding, it has a good fuel because it has plenty of warm waters along its track and then there is a good exhaust in the upper level of the atmosphere – so it’s a good recipe for explosive intensification,’ he added, using the local name for the storm.

Noru comes nine months after another super typhoon devastated swathes of the country, which killed more than 400 people and left hundreds of thousands homeless. 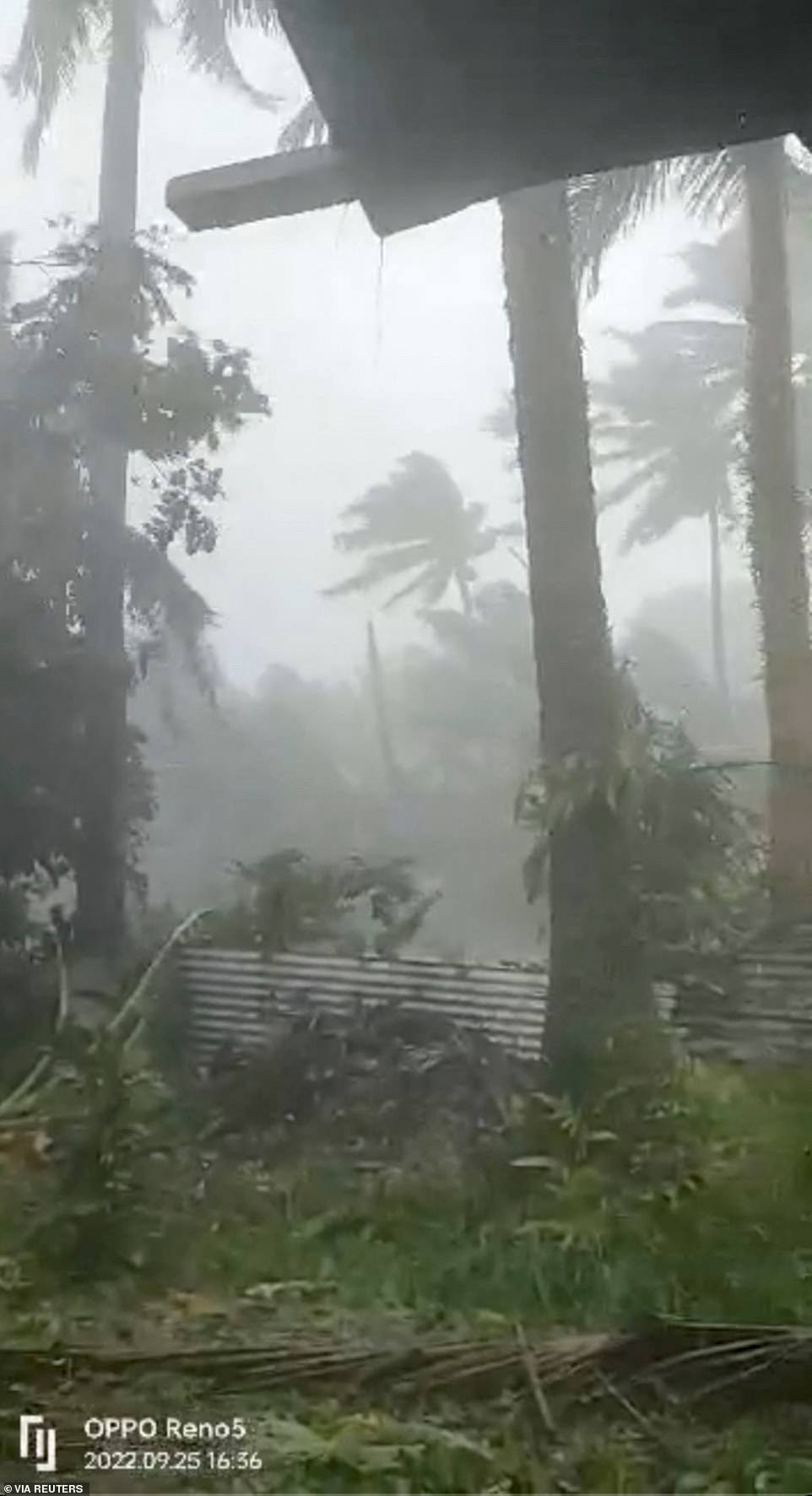 Damaged tree branches lie on the ground during heavy rainfall in Polillo, Quezon Province. The storm could do longer-term damage by taking down coconut and mango trees and causing ‘severe losses’ to rice and corn crops in the heavily agricultural region 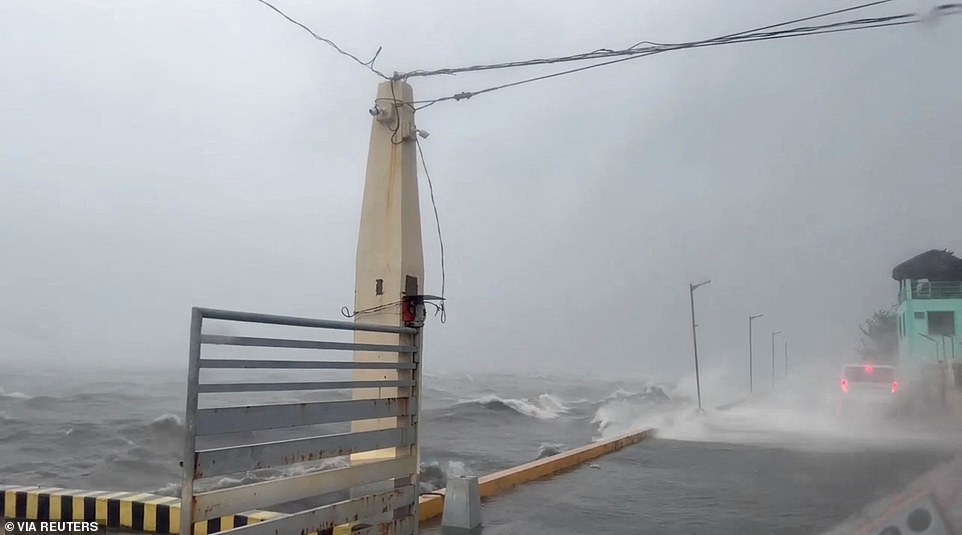 Waves crashes into road on coastline during heavy storm in Polillo, Quezon Province. The weather bureau warned of dangerous storm surges more than three metres high along the coast of Aurora and Quezon

‘People living near the coast have been told to evacuate. We live away from the coast so we’re staying put so far. We’re more worried about the water from the mountains,’ said Rhea Tan, 54, a restaurant manager in Dingalan.

The weather bureau warned of dangerous storm surges more than three metres high along the coast of Aurora and Quezon, including the Polillo islands, along with widespread flooding and landslides as the storm soaks the region.

The storm could do longer-term damage by taking down coconut and mango trees and causing ‘severe losses’ to rice and corn crops in the heavily agricultural region, with videos showing high winds toppling huge trees. 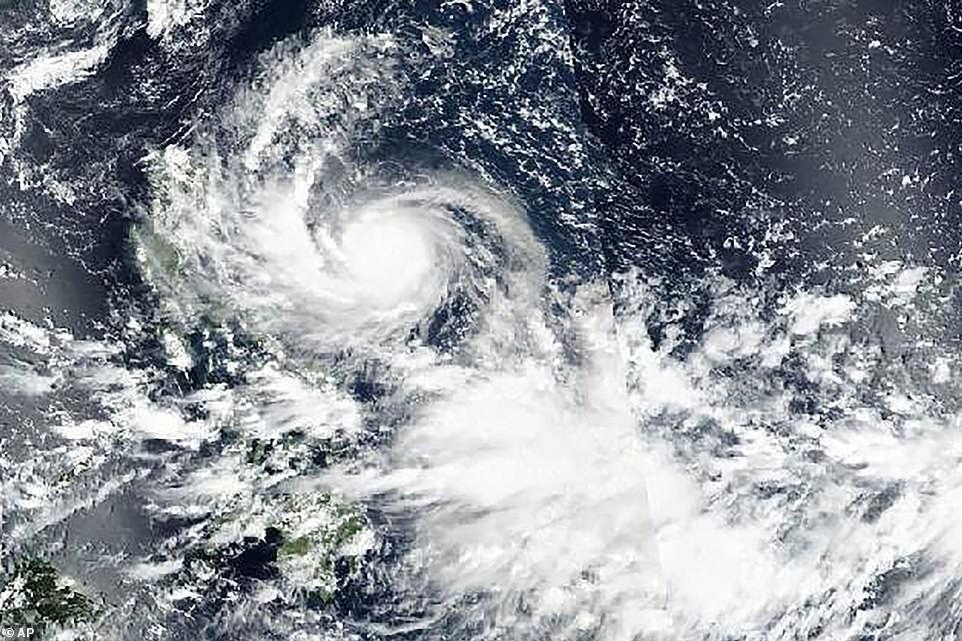 The coast guard reported more than 2,500 people had been left stranded by ferry cancellations as vessels took shelter ahead of the storm.

Dozens of flights in and out of Manila have also been cancelled.

The Philippines – ranked among the most vulnerable nations to the impacts of climate change – is hit by an average of 20 storms every year.

In 2013, Typhoon Haiyan, one of the most powerful tropical cyclones ever recorded, killed 6,300 people.