The world’s top UFO hunter – who never saw a flying saucer in 62 years of research – has died aged 84.

Retired nuclear physicist Stanton Friedman was worshipped by thousands of alien believers across the planet.

He died at Toronto’s Pearson International Airport on his way home to Frederiction, Canada, on Monday night after a UFO talk in Columbus, Ohio, his family said. 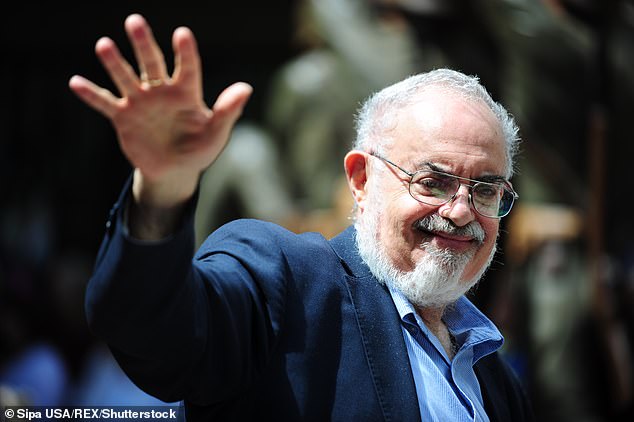 He was the first civilian investigator to probe the so-called ‘Roswell Incident’ in 1947 and bring it to the attention of the world.

The incident is seen as the ‘holy grail’ by Ufologists after the US military is rumoured to have recovered two crashed flying discs and several alien bodies from a ranch in New Mexico. 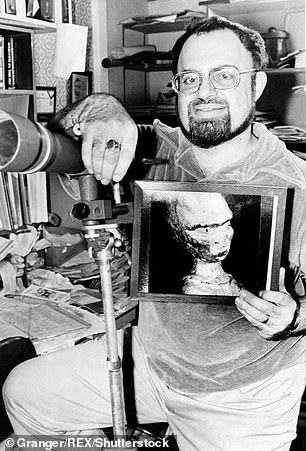 Mr Friedman with a photograph of what he claimed was a portrait of an alien. It was drawn from the recollections of a man who said he was abducted by aliens

Since 1967 Mr Friedman lectured on the subject ‘Flying Saucers are Real’ at more than 700 colleges and over 100 professional groups in all 50 US states, nine Canadian Provinces, 12 cities in England and nine in other countries.

One of his most famous sayings was: ‘Don’t be an apologist ufologist.’

He also appeared on hundreds of radio and TV shows and won debates at the Oxford University Debating Society.

Mr Heseltine, 59, of Scholes, West Yorks, said: ‘He was a man who championed all his life that ET visitations to planet Earth were real despite the fact that he had never had a personal sighting.

‘I first met him in Dublin at the first Irish UFO Conference in 2004 and I have to admit that I was in awe to be in his presence for the first time such was his incredible reputation in the field of Ufology worldwide.

‘In the summer of 2015, I had the great honour of having him as a speaker at the UFO Truth Magazine International Conference in Holmfirth and I clearly remember picking him up at the airport and thinking how cool it was to have such a great man in the car with me. 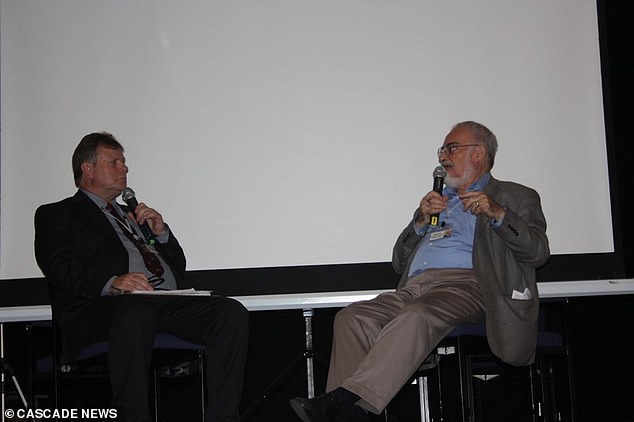 Mr Friedman in conversation with fellow UFO investigator Gary Heseltine. Mr Heseltine awarded him a lifetime achievement award at a UFO conference in 2015

‘At the conference itself I presented him with a well deserved Lifetime Achievement Award and fulfilled a personal ambition of mine when I interviewed him on stage about his life. Wow, what an honour and genuine thrill for me.

‘Some people are born possessing those rare qualities of class and integrity and Mr Friedman had both in abundance.

‘For me he will always be the greatest ufologist of all time. He never wavered in his belief that SOME UFOs were ET in origin. I mourn the passing of a truly legendary man.’

Mr Friedman was a regular columnist to the magazine for two years until he retired in April last year.

During his lectures, he told his audiences he had reached four major conclusions.

He said: ‘The evidence is overwhelming that Planet Earth is being visited by intelligently controlled extraterrestrial spacecraft. In other words, SOME UFOs are alien spacecraft. Most are not.

‘The subject of flying saucers represents a kind of Cosmic Watergate, meaning that some few people in major governments have known since July, 1947, when two crashed saucers and several alien bodies were recovered in New Mexico, that indeed SOME UFOs are ET. As noted in 1950, it’s the most classified U.S. topic.

‘None of the arguments made against conclusions One and Two by a small group of debunkers such as Carl Sagan, my University of Chicago classmate for three years, can stand up to careful scrutiny. 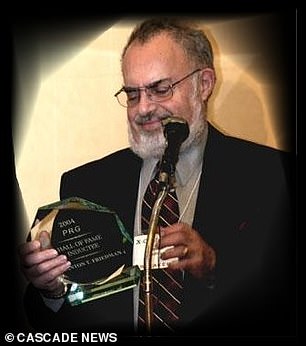 ‘The Flying Saucer story is the biggest story of the millennium: visits to Planet Earth by aliens and the U.S. government’s cover-up of the best data (the bodies and wreckage) for over 50 years.’

He mocked NASA’s SETI programme branding it the ‘Silly Effort to Investigate’ and famously won a $1,000 bet with arch-skeptic Philip Klass, over the leaked MJ-12 documents – a highly classified group codenamed Operation Majestic 12 to deal with flying saucers. Klass claimed the documents were fake but Mr Friedman produced other examples of top secret government documents in the same typeface.

Mr Friedman received his BSc and MSc degrees in physics from the University of Chicago in 1955 and 1956.

He worked for 14 years as a nuclear physicist by such companies as GE, GM, Westinghouse, TRW Systems, Aerojet General Nucleonics, and McDonnell Douglas working in such highly advanced, classified, eventually cancelled programs as nuclear aircraft, fission and fusion rockets, and various compact nuclear power plants for space and terrestrial applications.

He once said: ‘I prove at every lecture that the NSA and CIA are withholding UFO data. Having worked under security for fourteen years, visited seventeen document archives, and having become aware of the huge black budgets of the NSA, NRO, CIA, DIA, etc., I know how easy it is to keep secrets.

‘My 19 years of study about crashed saucers, and 13 years on the MJ-12 documents have convinced me these are real.

‘The challenge for us all is to recognise that while our future is in space, we are not alone. I truly hope we qualify for admission to the Cosmic Kindergarten.’