For many people, being selected as a highly paid chief executive would be a dream come true. Unless, that is, you are appointed by the Chinese Communist Party as the chief executive of Hong Kong. 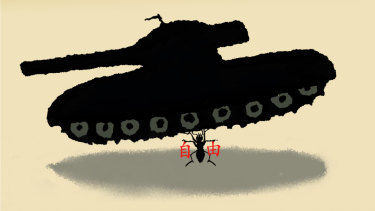 Carrie Lam, who was selected by a Beijing-controlled committee in 2017, is the latest leader of the former British colony to find out how hard it is to be caught between the world's most powerful authoritarian government and a defiant semi-autonomous city that cherishes its freedom and separate identity.

Lam, a 62-year-old career civil servant, was forced into a humiliating climbdown at the weekend, suspending plans to implement a new extradition law after three huge protests in the space of a week. For the first time, the law would have allowed people in Hong Kong to be extradited into mainland China. 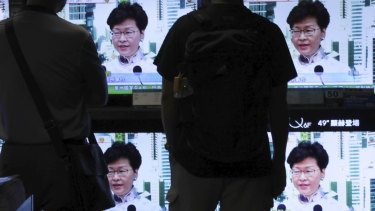 Hundreds of thousands of Hong Kongers took to the streets to oppose the proposal, which would have lowered a vital shield that protects Hong Kong's vaunted rule of law from the repressive and capricious justice system in the rest of China. 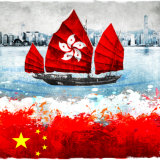 Led by high school and university students, Hong Kongers were also expressing their anger and frustration at the way in which Beijing, backed by the Hong Kong government, has been chipping away at the freedoms and autonomy that were promised to them for 50 years after the British handed the city back in 1997.

After conferring with her ultimate bosses in the Chinese Communist Party, an ashen-faced Lam announced the suspension of the extradition law at a press conference on Saturday. But she refused to apologise for pushing such a divisive proposal until after another massive protest in Hong Kong on Sunday.

Even then, her mea culpa took the form of a terse statement in the third person in which the "chief executive" apologised because "the deficiencies in the government's work had led to substantial controversies and disputes in society".

The wording read more like a missive from the Communist Party than one from a leader genuinely seeking to assuage the anger and fears of her people.

That is a reflection of just how much the Hong Kong government has changed over the past few years, as it has come under pressure because of Chinese President Xi Jinping's more assertive stance and his campaign to eradicate criticism and dissent within China's borders.

When I interviewed Lam at her official residence last year, I asked her which political leader she most admired. "You may say that it's shoe-shining," she replied. "But I have to say I find President Xi more and more charismatic and admirable in the things that he is doing and saying."

It was hard to tell if she truly believed it or felt she had to respond that way. Lam, who rose from humble beginnings to the top job in Hong Kong, has always insisted she is motivated by a sense of duty, faithfully serving her bosses, whether they be British colonialists (before 1997) or Chinese Communists (now).

Like the UK's Theresa May, another female leader handed an impossible job, her steely nature can make her seem out of touch. Hong Kongers were aghast when last week she justified the use of tear gas, rubber bullets and baton charges against young protesters by saying that she would have spoiled her own two sons if she had given in to their every demand.

On Sunday, vast legions of Hong Kongers (340,000 according to the police, two million according to activists) literally filled the streets of the city centre to demand that Lam step down and halt prosecutions of the young protesters arrested by the police last week, some while they were receiving treatment in hospital.

But, however tactless she may appear, Lam's resignation would change little. Hong Kong's position, as a mostly free and partially democratic city within a dictatorial state, was always going to be difficult to maintain.

The challenge is even harder now that Hong Kong finds itself on the front line of a global ideological battle between Xi's increasingly strident Communist system and the liberal democratic values to which many Hong Kongers, and much of the rest of the world, adhere.

It is little wonder that no-one has yet managed to succeed as Hong Kong's chief executive. Tung Chee-hwa, the first post-handover chief executive, resigned early after mass demonstrations against a proposed national security law in 2003. Donald Tsang, who followed him, was later convicted and jailed for misconduct in public office.

CY Leung, the next in the hot-seat and Lam's predecessor, was denied a second term by Beijing after the pro-democracy Occupy movement sprouted on his watch in 2014 and shut down parts of the city centre for 79 days.

Even if the extradition bill is never brought back, and Lam is forced to resign, the challenges to Hong Kong's way of life will only grow. In recent years, we have seen democratically elected legislators ousted, activists banned from running for office, a political party outlawed, a foreign journalist expelled and Beijing's agents kidnapping a bookseller and a billionaire from the heart of Hong Kong.

Of the many threats on the horizon, Hong Kong's Legislative Council is still considering a bill that would make it illegal to disrespect the Chinese national anthem, putting Hong Kong football fans who have routinely booed the song at matches at risk of a three-year jail term.

The Communist Party does not want to destroy Hong Kong out of malevolence. But Xi's resurgent one-party authoritarianism cannot easily live alongside the freewheeling ways of Hong Kong.

The remarkable people of this city are doing their best to ensure that might does not win out in this very uneven clash of values. Bruised as she is, Carrie Lam is largely collateral damage in a much bigger fight.

Who would want to stand between the seemingly unstoppable force of China's Communist Party and the immovable object of the Hong Kong people, and their resolve to defend their freedoms and identity?

Ben Bland is the director of the Southeast Asia Project at the Lowy Institute and the author of Generation HK: Seeking Identity in China’s Shadow.