Baghdad: US Secretary of State Mike Pompeo has made an unannounced trip to Iraq as Washington warns Iran against any action against American interests in the Middle East. 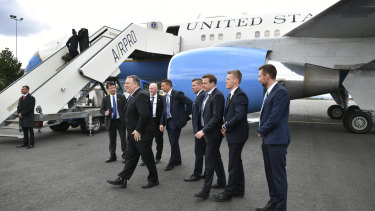 US Secretary of State Mike Pompeo, centre, poses with security officers of the Finnish police as he prepares to leave Rovaniemi, Finland, after attending the 11th Ministerial Meeting of the Arctic Council. Credit:AP

Pompeo was in Baghdad briefly on Tuesday night before flying out.

Pompeo says his visit was meant to show US support for "a sovereign, independent" Iraq, free from the influence of neighbouring Iran. He met with Iraq's president and prime minister.

Pompeo's visit comes amid increasing tensions between Washington and Tehran. The US is rushing an aircraft carrier strike group to the Middle East to deter or respond to any Iranian attack. US officials have said there are indications Iran is planning to retaliate for the Trump administration's stepped-up sanctions on the country, although the threat information remains vague.

Pompeo had been due to meet German Chancellor Angela Merkel and Foreign Minister Heiko Maas in Berlin on Tuesday.

But at the last minute, the State Department canceled the visit, blaming "pressing issues."

"We look forward to rescheduling this important set of meetings," State Department spokeswoman Morgan Ortagus said in a statement. "The secretary looks forward to being in Berlin soon."

Maas spoke with Pompeo by phone, the Associated Press reported, and they plan to reschedule the meeting.

A day earlier, Pompeo attended a meeting of the Arctic Council in Finland, where he spoke with Russian Foreign Minister Sergei Lavrov on the sidelines. Russian state media said Tuesday that Pompeo and Lavrov plan to meet again next week in Sochi.