Washington: The US Senate passed 94-1 legislation designed to combat hate crimes in the US, as legislators united to respond after a sharp increase in attacks against Asian-Americans since the onset of the coronavirus pandemic.

The bill, officially titled the COVID-19 Hate Crimes Act, is based on a year’s worth of rising attacks after the pandemic began in Wuhan, China. Five days after Hirono introduced the legislation, eight people were killed, including six women of Asian descent, in mass shootings at three Atlanta spas. The crimes heightened the pressure on President Joe Biden and Congress to respond to the rise in attacks against the Asian American community. 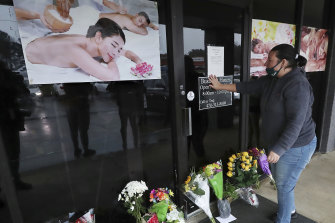 Jessica Lang pauses after dropping off flowers at Youngs Asian Massage parlour in Atlanta where four people were killed in a shooting in March.Credit:Atlanta Journal-Constitution/AP

An estimated 3800 hate crime incidents against people of Asian descent were recorded between March 19, 2020 – around when lockdowns started – and February 28, 2021, according to the tracking initiative Stop AAPI Hate. Most were verbal harassment and shunning, but 11 per cent of them were instances of physical assault.

While the bill bolsters resources for addressing hate crimes more broadly – including money for online and hotline reporting systems, supporters said it would also send a clear message to the Asian American community that steps were being taken to curb an alarming increase in threats and violence.

“By passing this bill, we’ll send a message to the country that should be all too obvious by now,” said Senate Majority Leader Chuck Schumer, a New York Democrat. “Hate crimes will not be tolerated and federal law enforcement will do everything in its power to detect, deter and if necessary prosecute crimes to the full extent of the law.” 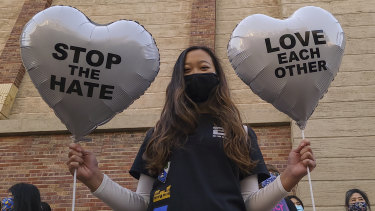 The legislation requires the Justice Department to conduct a review of hate crimes, and to provide guidance to state and local governments to enable them to establish online reporting and expand public education campaigns. It also provides grants for states hotlines and better their training to identify and report hate crimes.

Its lead sponsors, including Democratic Senators Mazie Hirono of Hawaii and Tammy Duckworth of Illinois, said it could help quell increased attacks on Asian Americans and Pacific Islanders over the past year. Backers of the bill cited the language of former president Donald Trump and some of his allies, who routinely called COVID-19 the “Chinese virus” or the “Wuhan Virus”, for inflaming prejudice.

“I cannot tell you how important this bill is to the AAPI community, who often has felt very visible in our country, always seen as the other. And for them to experience that kind of hatred against them,” Hirono told reporters after the legislation passed.

Senate Minority Leader Mitch McConnell, whose wife Elaine Chao is Asian American, was among Republicans who got behind the legislation. Missouri GOP Senator Josh Hawley was the lone “no” vote.

Speaker Nancy Pelosi said the Democrat-majority House of Representatives would take and pass the Senate legislation next month. Biden has said he supports the bill indicating he will sign it into law.