‘Guys like him are why I have to fight every single day’: US sports reporter’s emotional attack on Tyson Fury over his previous homophobic comments as British boxer beats Tom Schwarz in Las Vegas

An American sports reporter spoke out emotionally against Tyson Fury over the British boxer’s homophobic beliefs before his heavyweight fight last night.

ESPN’s Israel Gutierrez, who is gay, said Fury’s comments in the past ‘make me feel like I don’t matter’ and said that ‘it’s because of guys like that that I have to fight every single day’.

Fury has previously declared that homosexuality being legal was a sign that the world was about to end, and compared transgender people to bestiality.

The boxer, who has revived his career after a doping ban and won his Las Vegas bout against Tom Schwarz in two rounds last night, has also ranted about Jews and transgender people in a series of bizarre outbursts. 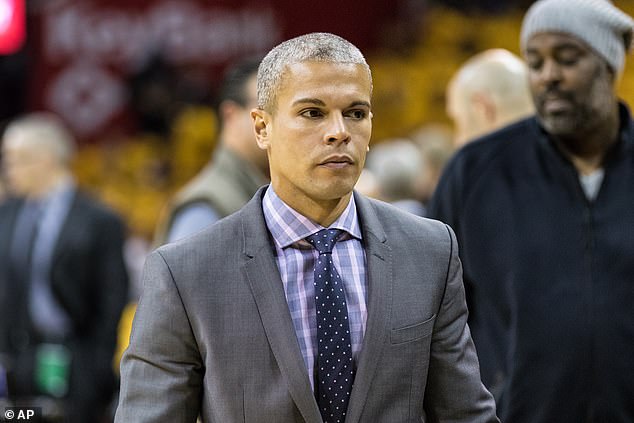 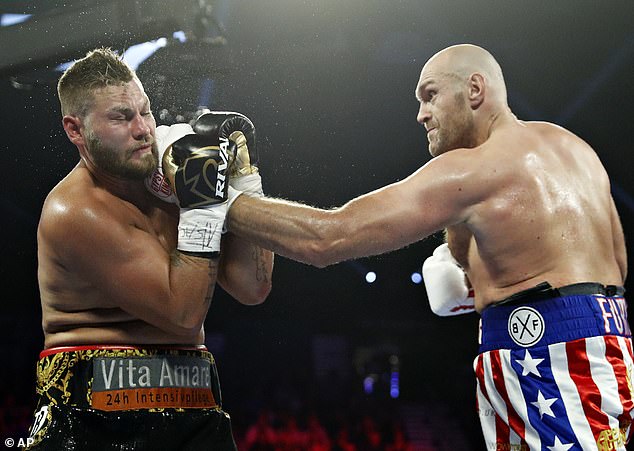 Tyson Fury (right), pictured in action against Tom Schwarz during his heavyweight fight in Las Vegas last night, has previously said that homosexuality being legal was a sign of the end of the world in one of several bizarre outbursts

Gutierrez took aim at Fury on Friday on a show called Around the Horn, a day before the fight for which ESPN is paying Fury handsomely.

Speaking to fellow panellists, Gutierrez said: ‘I just wanted to let you guys know what it feels like to watch Tyson Fury, a man who’s been very open about his beliefs including the fact that homosexuality and the acceptance of it is a sign that the world is ending.

‘It takes me right back to my teenage years and my early childhood when I looked around and thought everybody was looking down on my, thinking that I’m less then them just because of this way I was born.

His voice breaking, he went on: ‘But I’m still going to watch and I’m going to hope that it strengthens me.

‘It’s because of guys like that that I have to fight every single day. Happy Pride, everyone.’

Responding, the show’s presenter thanked Gutierrez and said: ‘Don’t let anyone else define who you are’, as another guest applauded.

The homophobia row first erupted in November 2015 when Fury was interviewed by the Mail on Sunday. 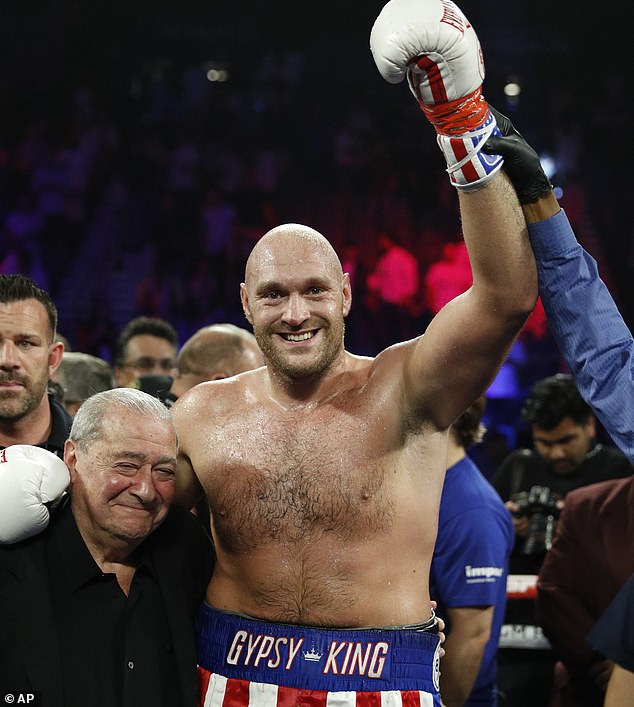 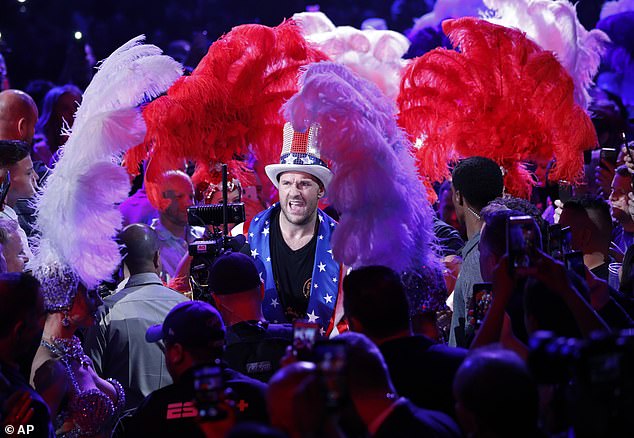 Fury last night wore the American stars and stripes as he entered the arena, in a sign of his growing popularity in the United States 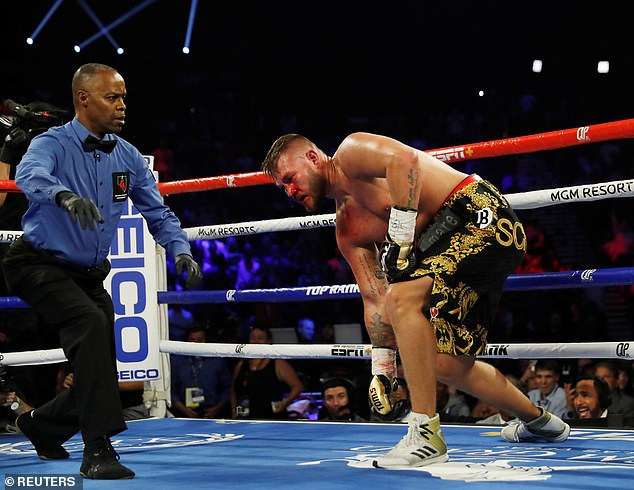 Fury sent his opponent Schwarz down to one knee in the second round, bloodying his nose and preparing to end the fight

In the interview he announced that ‘the end is near’ and ‘the devil is very strong at the minute’.

Asked to elaborate, he said: ‘There are only three things that need to be accomplished before the Devil comes home. One of them is homosexuality being legal in countries, one of them is abortion and the other is paedophilia.’

His comments sparked a furious backlash, although he faced no punishment from the British Boxing Board of Control.

It also led to demands for him to be barred from nomination for the BBC’s Sports Personality of the Year award.

He denied being a homophobe, insisting he was a ‘good Christian’, and falsely claimed he had been misquoted.

In a separate outburst in 2016, Fury referred to fellow British boxer David Haye as ‘David Gay’.

The same year he also rambled about being ‘brainwashed by Zionist Jewish people who own all the banks’ and compared transgender people to bestiality. 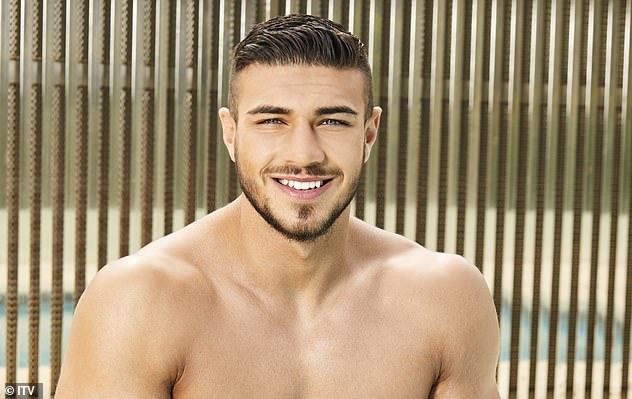 In an apology in May 2016 he admitted he had ‘said some things which may have hurt some people’, insisting he meant ‘no harm or disrespect to anyone’.

This month, his brother Tommy Fury, a contestant on Love Island, was also caught in a homophobia row over allegations he used the word ‘f****t’ to describe Dereck Chisora, another boxer.

Tyson Fury did not fight professionally between 2015 and 2018 after receiving a doping ban.

In the heavyweight fight in Las Vegas last night he eased to victory by stopping Germany’s Tom Schwarz in the second round.

The contest was his first fight since his thrilling draw with American Deontay Wilder last December, a bout which many felt he deserved to win. 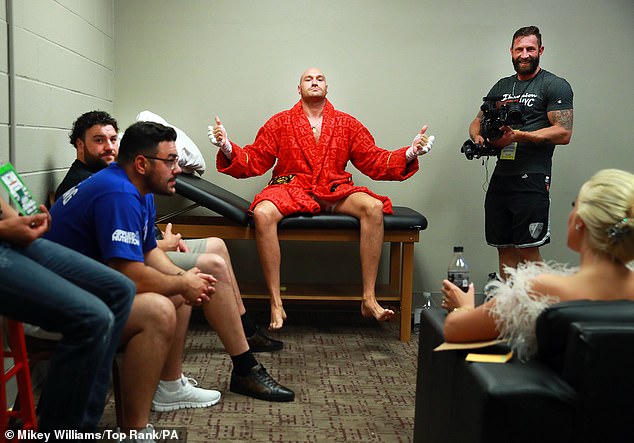 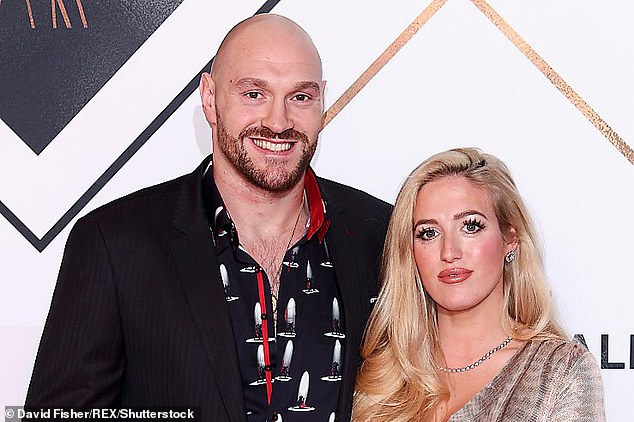 The Wilder fight generated a wave of American interest in Fury, who wore the U.S. stars and stripes in the ring last night.

He also belted out Aerosmith’s ‘I Don’t Wanna Miss A Thing’ as his wife Paris watched on in the MGM Grand Garden Arena.

It is little secret that Fury expects to fight Wilder in a rematch next year.

‘I already beat him once so I’ll beat him again, and he’s going to get a fully match-fit, sharp Tyson Fury,’ the British fighter said after his victory last night.

‘It’s the biggest fight in world boxing, and the biggest we’ll see for the next few years. It doesn’t get any bigger.’

‘I wanted to show a few things to the American public, to introduce myself properly.

‘I’m more active than I’ve ever been in my career, apart from the first year. I’ve always wanted to stay active, and I’m finally getting the opportunity to.’