Britons under the age of 40 will be offered their second Covid jab after eight weeks instead of 12, under new plans to get every adult fully vaccinated before winter.

Boris Johnson said the aim was for all adults to be inoculated by mid-September, when Covid rates are expected to rise and the NHS grapples with seasonal pressures.

Last month, the gap was shortened for older people in a bid to protect the most vulnerable amid the rise of the highly-infectious Indian variant.

Boris Johnson announced the change to the dosing strategy at tonight’s press conference, where he set out plans for a post-lockdown England from July 19.

Ministers are also considering whether to roll out third vaccine doses for all over-50s, NHS staff, carers and patients with underlying health conditions this autumn.

An Oxford University study last week showed that antibody levels could be restored to their peak with the use of a ‘booster’ vaccine months after the second.

But whether or not this would improve on the already near-100 per cent protection against death that two doses provide is still unknown.

No10 is now wrestling with the moral dilemma of whether to run the booster vaccine programme or send the doses to developing countries where supplies are scarce.

Vaccinating children is another contentious strategy being considered by the Government, with some of its advisers warning that Covid itself is less dangerous to youngsters than a jab. 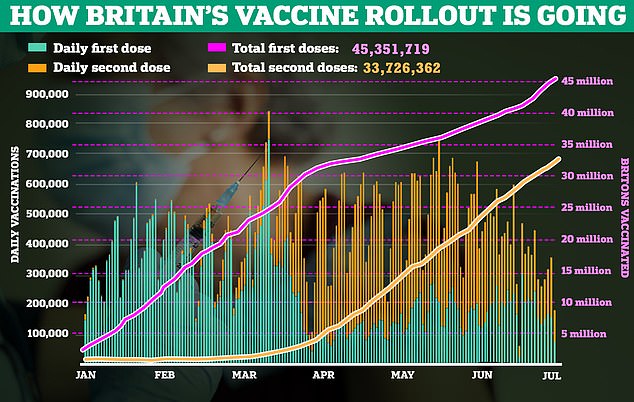 Originally, both AstraZeneca and Pfizer’s vaccines were approved to be dished out in three-week intervals because that was the gap tested in the research trials.

But No10’s scientists pushed the regimen back to 12 weeks to get wider protection in winter, when the second wave started to take off.

Studies since have shown that both jabs actually perform slightly better when the doses are spaced out for longer than a month.

The Government’s top scientists say everyone under the age of 40 should wait at least eight weeks before getting their second dose and no more than 12.

It comes after over-40s had their second dose gap shortened last month in the face of the Indian variant.

Professor Anthony Harnden, who helped design the jabs priority list, said he wouldn’t recommend getting the second dose of the AstraZeneca vaccine sooner than eight weeks after the first.

But he added the second dose of the Pfizer jab can be given from three to 12 weeks after the first dose.

Numerous studies have suggested that both the Pfizer and AstraZeneca jabs are more effective after a longer period between doses.

Second doses can be booked online with the NHS, or received at walk-in clinics.

There are around eight million adults in Britain who are yet to receive their first dose.

There were reports that walk-in vaccination centres at the Science Museum and Emirates Stadium were offering second doses to anyone who’d been jabbed more than three weeks prior.

Meanwhile, one of the leading researchers behind Oxford University’s jab called for Britain to ditch its booster vaccine scheme and ship doses to poorer countries.

Sir Andrew Pollard argued it would be ‘difficult to justify’ giving out top-ups in the UK when rates are lagging behind so badly in low-income nations.

Fewer than one per cent of the world’s Covid vaccine supplies have gone to poorer nations so far.

Sir Andrew, who was knighted last month for his role running trials of the Oxford jab, also admitted ‘we do not have the evidence yet that we need boosters’.

Writing in The Times today about No10’s plan to dish out top-up jabs this autumn, he said ‘it is very early to make the call’ because only six months have passed since the first batch of second doses were dished out.

‘If a booster is not needed yet, it may be better to wait, since they usually work better when given later,’ he added.

Around 32million Brits may be in line to receive a third jab in as little as two months, amid concern over a winter Covid wave.

The Government’s top scientists have set out plans for over-50s to get extra shots in September and beyond, although ministers are yet to sign them off.

It could see pharmacists give out Covid booster jabs at the same time as the yearly flu shot.

Vaccines are not perfect. Thousands of fully vaccinated Britons have already been struck down with the Indian Delta variant, which began spreading rapidly in May.

But the current jabs are highly effective and have dramatically severed the link between infection and severe illness, with hospitalisations and deaths yet to spiral at the same pace as cases.

Sir Andrew admitted some scientists, including himself, were worried about the body making fewer antibodies against mutant strains such as Delta.

But he said such fears ‘may not be justified’ because other key parts of the immune system will remember how to fight off the virus.

Writing in The Times, Sir Andrew said: ‘Our immune system never forgets those doses we’ve had.

‘It is ready to spring into action if we meet the virus in the future. Immune memory can last a lifetime.’

And discussing plans to dish out top-up jabs on BBC Radio 4’s Today programme, he added: ‘We haven’t got evidence so far that we do need boosters.’

Sir Andrew, who is also chair of the JCVI — a panel of scientists advising ministers on Covid jabs, said it was a ‘danger to us all’ to leave poorer countries unvaccinated.

‘This catastrophe is not just someone else’s problem, it is a danger to us all, allowing new variants to emerge, destabilising global economies and disrupting travel,’ he wrote.

‘Many living in these countries will not even get a first dose this year.

‘It is difficult to justify getting a third dose to ourselves, especially if not clearly needed, ahead of zero-doze people whose lives remain at risk.’

Fewer than three per cent of people in Africa have received at least one dose of the vaccine, according to Oxford-backed stats website Our World in Data.