A vengeful mother who told police her brother-in-law was a terrorist and friend of London Bridge attacker Usman Khan has been jailed for over two years.

Bushra Ali, 39, wrote hoax letters to authorities including the Home Office accusing him of plotting to kill dozens of people in Reading at Christmas.

The malicious slurs against her brother-in-law came amid a bitter family feud following a bruising divorce which divided relatives.

Her allegations led to a ‘traumatic’ police raid and arrests at the address Ali had given to authorities – before officers realised the claims were false and arrested her, sparking her immediate confession.

Sentencing at Reading Crown Court, the judge scolded Ali, from the Berkshire town, for wasting 250 hours of police time and handed her a 30-month prison sentence for one count of doing acts tending and intended to pervert the course of public justice. 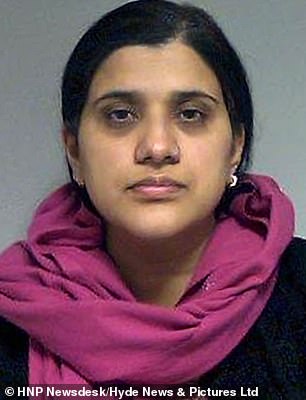 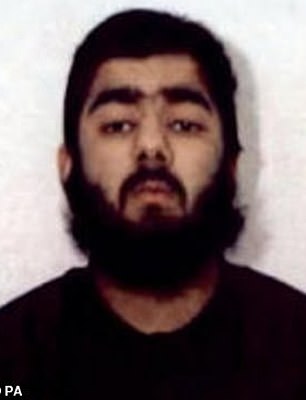 Bushra Ali, 39, (left) wrote hoax letters to authorities including the Home Office accusing him of plotting to kill dozens of people in Reading at Christmas and being friends with London Bridge terrorist Usman Khan (right)

The contents of three letters by Ali sent over the course of 10 days to authorities in December 2019 were read in court today.

They alleged her brother-in-law, who cannot be named, was a friend of Usman Khan, who notoriously killed two people on London Bridge in November 2019.

Ali also claimed he was part of a gang of terrorists who were ‘going to do a very big attack in Reading during Christmas 2019.’

Prosecutor Christopher Hewertson told Judge Angela Morris: ‘This case relates to the sending of three handwritten letters, including images, to the Thames Valley Police, the Home Office and the Police and Crime Commissioner for Thames and Chiltern, in December last year, alleging that family members of the defendant were planning a terrorist attack around Christmas.

‘This was originally treated as plausible by the police and took up hundreds of hours of specialist police work but was subsequently found to be false.

‘The occupants of the address named in Reading were the defendant’s sister and her husband, who was the particular target of these assertions, saying he was a central terrorist connected to Khan of the London Westminster attacks in November of that year.’ 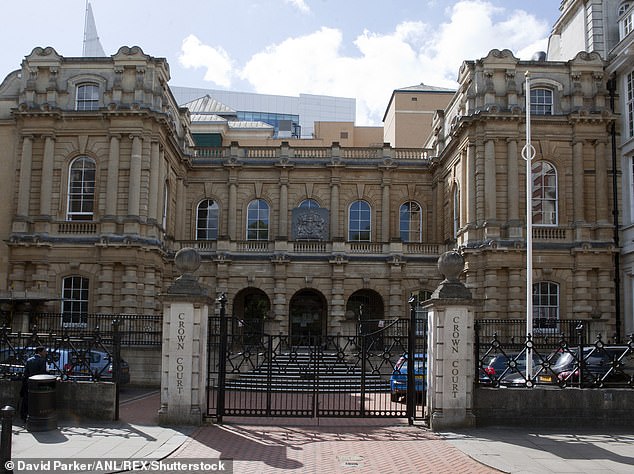 Sentencing at Reading Crown Court (file photo), the judge scolded Ali, from the Berkshire town, for wasting 250 hours of police time and handed her a 30-month prison sentence for one count of doing acts tending and intended to pervert the course of public justice

The first letter, scrawled note on the back of one of the photos sent on December 9 2019, read: ‘This man and his friend are terrorists. They are friends of Usman Khan who did the attack on London Bridge.

The prosecutor said the enclosed photos were from a family wedding in Pakistan where it was customary to fire guns into the air in celebration of the union.

Mr Hewertson said: ‘The defendant, Ali, knew it had nothing whatsoever to do with terrorism.’

The second letter alleged: ‘This man is a terrorist. He is going to do a attack in Reading on Christmas. He lives at (an address in Reading) He has a big gang, please help us from this evil.’

The third letter read out by the prosecutor said, ‘Please help Thames Valley Police, this man’s name is (subs note: name given to court).

‘He is a terrorist and he is very, very dangerous. He and his mother do money laundering. They are planning to do attacks in different places. Please put them behind the bars before it’s too late.’

The court heard that Ali was attempting to exact revenge on her brother-in-law for siding against her in a family divorce row with Ali’s brother.

When Ali’s sister-in-law separated from her brother, she was given custody of their children and 70 per cent of the value of the matrimonial home.

The row split the Pakistani family and Ali was angry with her brother-in-law for giving refuge to her brother’s ex-wife.

Mr Hewertson told the court: ‘During the acrimonious separation between the defendant’s brother and his ex-wife, the defendant clearly sided with her brother and against her sister and her husband, because they had provided accommodation at their home for the ex-wife and the children of the relationship.

‘The battle lines started to be drawn, in effect creating two feuding wings of this family unit.’

After sending the malicious letters, Ali messaged her brother seemingly explaining what she had done: ‘I wrote a letter to the Queen and the police head office about ‘the big b****’.

‘I have faith in Allah he will do us justice. Don’t do what you said you’d do. They’re s*** people. Leave it to Allah.’

Defence counsel Michael Phillips explained to Judge Morris the complex feud between the seven siblings and their spouses and the role Ali had had to play in it.

He said: ‘As the youngest daughter, pressure was being put on her to see if she could affect some sort of reconciliation.

‘Her reaction was entirely inappropriate and she says as much. It was completely stupid, to use her own words. The impact of an immediate custodial sentence on her children would be catastrophic.

‘This was not the most sophisticated offence of this nature. She used an envelope from Tesco – where she worked – and used her own handwriting..’

Sentencing Ali to 30 months, Judge Morris said sternly: ‘You knew that the address to which you directed the authorities in those letters housed not only adults but children as well.

‘It follows, therefore, that you did what you did without any care or thought for the traumatic consequences which might follow for the children being caught up in an early morning raid by police officers.

‘The specific reference to Usman Khan was the sort of thing which would have excited the police to establish an investigation immediately because of the coincidence in time between the first letter and the attack on Fishmonger’s Hall in London which left five innocent people dead.

‘In this case well over 250 hours of police investigative work had to be undertaken at a time when the country had recently suffered yet another terrorist attack.

‘You were arrested on December 24 at your home address. You confessed your involvement in these matters immediately but that was against an exercise in blaming your sister and brother-in-law as bad people. I do not accept that there is anything in these papers to justify that slur.

‘You were brought up in Pakistan and your early life was not a happy one. You moved to the UK in June 2009.

‘You have endured the deaths of two babies in quick succession. I accept all of that, but it does not excuse your conduct in respect of this offence.

‘It is only through the calm, thorough and responsible actions of the police investigating this matter that those who were the target of your unconscionable vendetta were not arrested against the full glare of publicity and the inevitable fear and trauma such an arrest would have caused.’

Ali, who had pleaded guilty, was also ordered to pay £181 in court costs.