The Victorian election will be fought against the backdrop of a cost-of-living crisis and parts of the global economy facing recession.

Battling these issues with a budget deficit baked into your starting point will be no small task for whoever wins government in November. But take a deep breath – there is a path through. 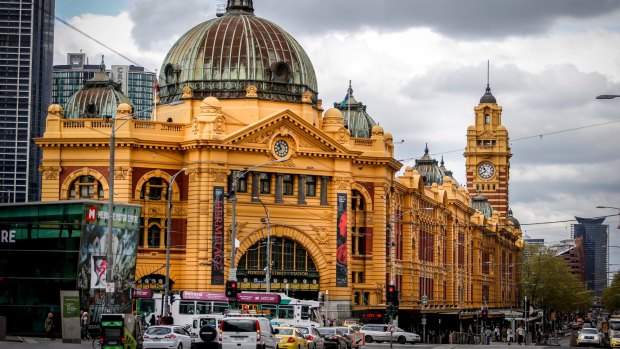 Victoria can avoid the recession that threatens to engulf the UK.Credit:Eddie Jim

Helping our state along will be the strength of the national economy. It’s not all good – the cost of living has increased rapidly, with inflation expected to peak in the current December quarter at a whopping 7.3 per cent. This, combined with rising interest rates, means we’ll soon see consumer spending pull back.

But the Australian economy is surprisingly well-protected against the rising cost of living. Spending cuts would be deeper if consumers hadn’t banked more than $200 billion in savings over the pandemic which they can now draw upon.

Businesses also have good levels of cash reserves to support themselves through a weaker economic environment. And the strength of commodity prices (albeit off their peaks) does Australia a favour by providing a national income windfall.

That might just be enough for Australia to steer a path clear of recession (which looks increasingly difficult for the UK and Europe and possibly the US).

The immediate outlook for the Victorian economy isn’t looking too bad either. The strength of the post-lockdowns boom in consumer spending and employment may see our Gross State Product lift by 3.7 per cent this year. This is higher than the 3.25 per cent growth rate forecast in the Victorian budget last May.

However, we predict growth will fall to just 1.4 per cent in 2023-24, well below the 2.25 per cent growth rate earmarked in the budget. Why? As well as lower growth in consumer spending, housing will play a role.

Next year most fixed-rate mortgage holders who borrowed at record low rates during the pandemic will see their deals expire, meaning they’ll have to join other borrowers channelling more and more of their income into loan repayments that have risen alongside the Reserve Bank of Australia’s cash rate.

Not only will this lower overall spending in the economy, but it will also reduce the ability of homebuyers to finance new home builds – and the construction sector is already showing signs of weakness due to materials and tradie shortages. New dwelling approvals in Victoria – a leading indicator of building activity to come – have fallen 30 per cent from their HomeBuilder-induced peak in mid-2021.

What will get Victoria through the choppy economic outlook is people power. Victoria’s decade before COVID-19 was characterised by a rate of population growth much faster than the national average – creating not only a larger economy but growing the per capita wealth of Victorians.

From that decade-long population boom, the COVID period for Victoria produced a population bust. But 2022 is providing some promising signs. Net overseas migration into Victoria in the March quarter of 2022 was a very healthy 32,000 (one third of the national increase), and overseas arrivals since then are trending up.

On the downside, net interstate migration still saw some 3500 Victorians move to other states in the March quarter, continuing a two-year trend.

With our national migration intake set to increase to 195,000 from 160,000, Victoria should be aiming to grab a high share and lobbying the federal government to prominently place down the welcome mat and actively encourage skilled migrants to consider Australia.

Let’s not expect that additional migrants will just “turn up” – we are in a global competition to attract and retain the best and brightest.

The other key baton pass to be engineered is a move away from public sector spending driving the economy, to one where there is a greater contribution from private business investment.

Private business investment in Victoria is only 0.5 per cent above pre-COVID levels (compared with 4.1 per cent for Australia as a whole). The state government needs to consider the conditions that can give rise to more business investment, particularly in green energy.

The other side of that baton pass is public sector spending restraint, so that the state budget is on a path back to balance.

Addressing all these issues while keeping a credible path back to budget balance will help place Victoria on good economic footing through a challenging period and will be a key measure of success for whoever forms government.

The Opinion newsletter is a weekly wrap of views that will challenge, champion and inform your own. Sign up here.