‘We heard a “pop, pop, pop” then a house blew up’: Frantic 911 calls and bodycam footage reveal unfolding horror after man set his home on fire and shot three of his neighbors dead before he was killed by police

Body camera footage and 911 calls have revealed residents’ horror after one of their neighbors set his house on fire and shot three people dead in Maryland.

Everton Brown, 56, was fatally shot by police after lighting the fire at his home on the morning of May 8 and killing three of his neighbors – Sara Alacote, 36; Sagar Ghimire, 24; and Ismael Quintanilla, 41.

It was not immediately clear what led to the violence on the residential street in suburban Baltimore, authorities said.

911 calls and video recorded by responding officers emerged this week, shedding light on the fear that gripped the community that day, as well as officers’ efforts to get Brown to surrender. 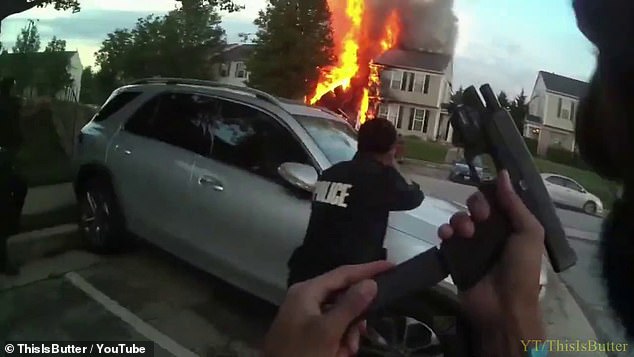 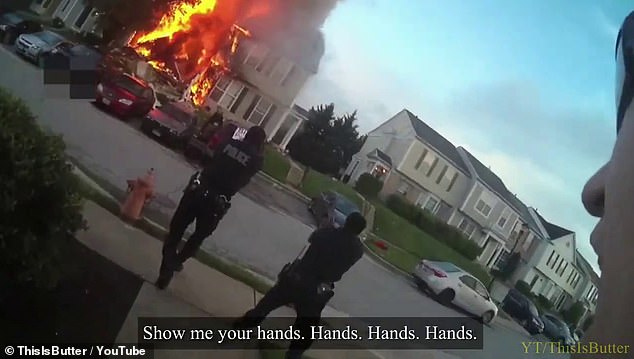 The suspect falls to the ground and police begin to approach him, warning him not to touch his gun as they get closer

A neighbor in the Woodlawn suburb of Baltimore reported the shooting and fire to police at 6.39am on May 8, saying she heard ‘somebody banging in somebody’s front door and then I just heard three gunshots’.

‘I see a man standing in the door posed with a weapon in his hand and I don’t know what he did to get in there because it jarred me out of bed and I’m about three or four doors down,’ the woman, who was not named, is heard telling a dispatcher in a  call that was released to YouTube Friday.

She continues to tell police that she hears a woman screaming, and it sounds like the man is ‘just shooting up the block’.

Another unidentified woman told the police ‘a house blew up, and the house next to it is on fire’.

‘Wait a minute,’ the dispatcher replies in the call, ‘a house exploded?’

She said it was ‘burning really bad’ and there was a female victim on the ground. ‘It doesn’t look like she’s moving,’ the neighbor tells the dispatcher. ‘She’s not moving. She’s not moving.’

That’s when she appears to notice the man shooting at his neighbors, identifying him as the man who lived in the house that blew up.

‘He blew up his house,’ she said, ‘he shot a lady, and then he came back out shooting again,’ standing in front of his house as it was burning.

She reported watching as the shooter started firing at police, and police ultimately shooting the suspect. 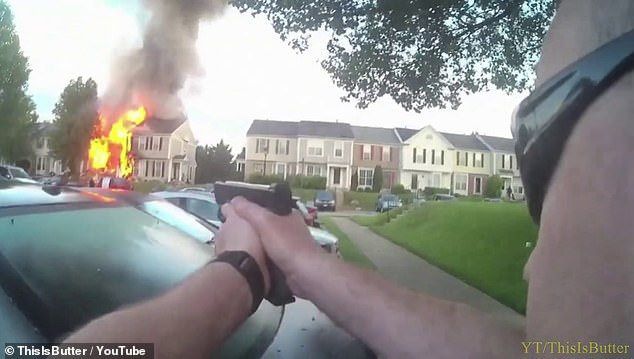 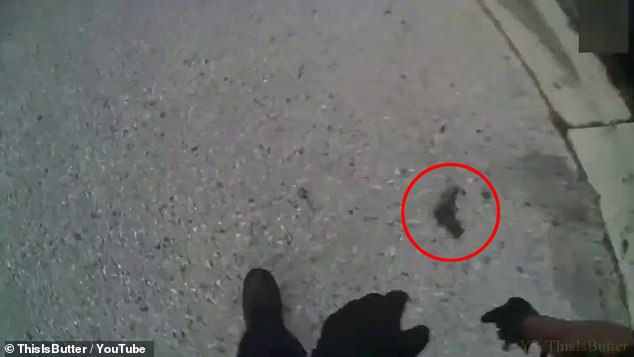 Police later uncovered his handgun from the scene, as well as a knife and explosives 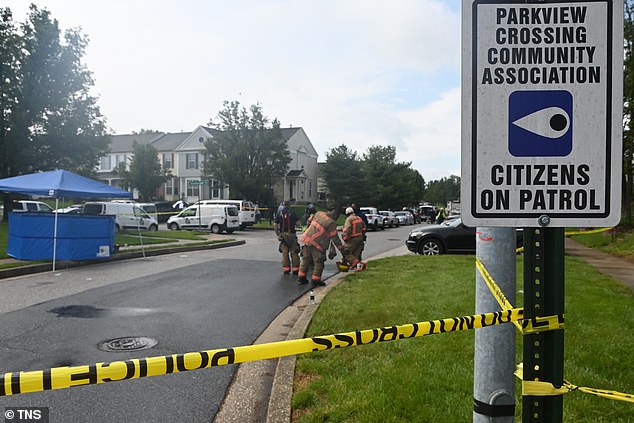 One of the 911 callers described to dispatchers how her neighbor ‘has signs all over his house that the “FBI is after me”, and we’ve known for years that he has a mental health problem.’

‘He’s never been trouble in the neighborhood,’ the female caller reports, ‘but I did just hear three gunshots and somebody screaming.’

Police body camera footage from the early morning shooting also showed officers arriving on the scene and finding the suspect standing next to his car, a red van with a poster proclaiming ‘Black people are the tool used to maintain racism’, shooting at his neighbors.

Cops tell the man to ‘drop the gun, drop the gun,’ as they fired at the him, until they ultimately hit him.

The man appears to continue to shoot as he falls to the ground.

He appears to try to reach for the gun again as cops approach him, but he seems rather motionless as cops tell him to ‘roll the f*** over’ and ‘give me your arm’ for handcuffs.

The officers who discharged their firearms were placed on administrative leave. 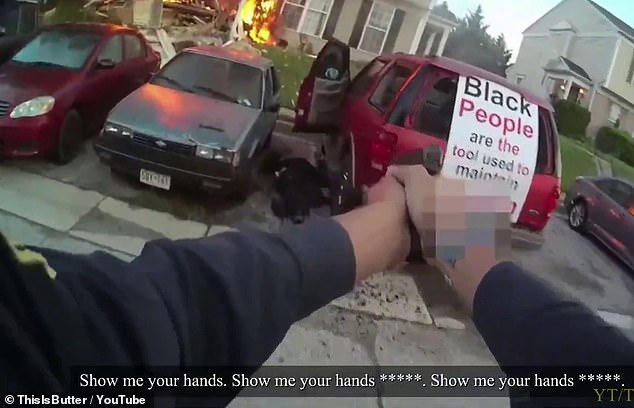 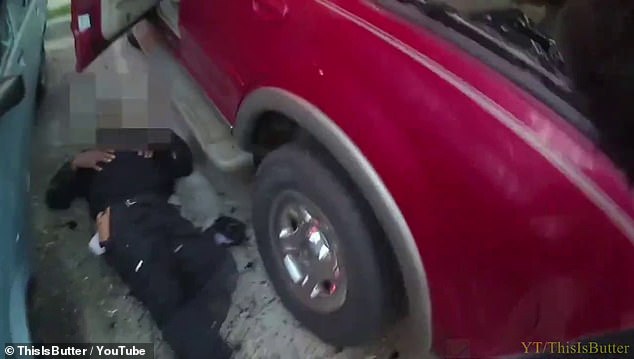 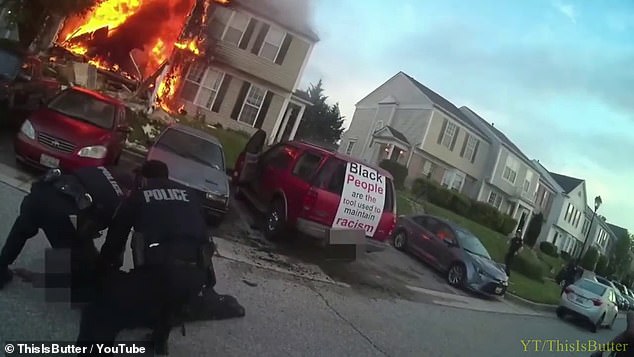 The police then dragged him into the street, where they handcuffed him 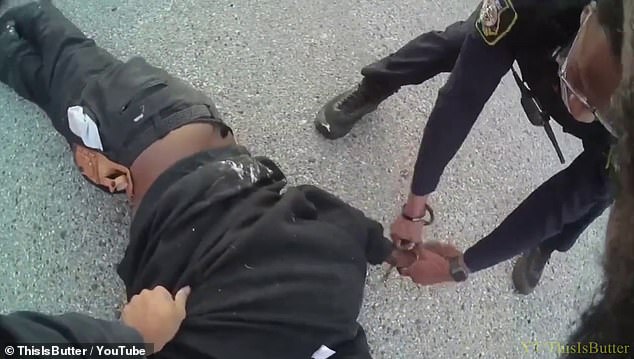 Brown’s body did not appear to be moving at that point, and he died en route to a local hospital

Brown died en route to the hospital, police later reported, and they recovered a handgun, knife and several homemade explosive devices from his home.

The officers found victims Alacote and Ghimire outside of their homes with bullet wounds. The third victim, Quintanilla, was found inside his home suffering from stab and gunshot wounds. All three died from their injuries.

A fourth person who was shot outside their house survived, police report.

The building where the fire started and one adjacent to it collapsed, Baltimore County Fire spokesman Tim Rostkowski said, and a third was heavily damaged.

‘We have this fire that happened. We also have this suspect who is armed,’ said Joy Stewart, a police spokeswoman. ‘How they’re all related — it’s really too early to tell at this point.’

An investigation is ongoing involving several law enforcement agencies at the local, state and federal level. 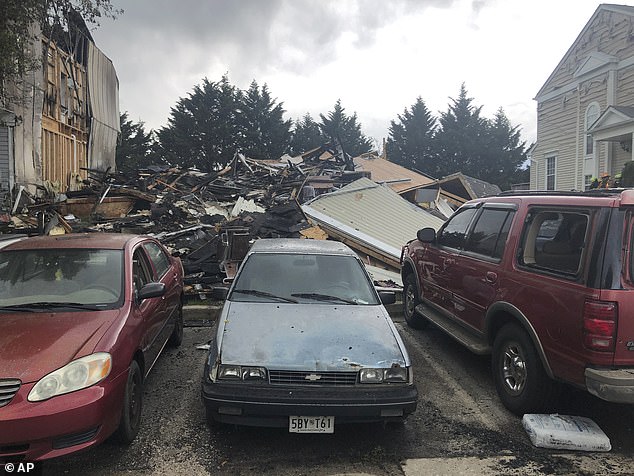 Brown’s townhouse, where the fire began, completely burned to the ground