There is no place like home – at least right now. Deputy Chief Medical Officer Nick Coatsworth said this week that, even accounting for Victoria’s second wave of COVID-19 infections, Australia had been “an exemplar” for the rest of the world on how to manage the virus.

Our freedoms have been limited this year, much more so in Victoria. But Australia's extensive testing regime, one of the best in the world, and our contact tracing systems, which contained the virus in most other states, has meant we are less likely to have been infected here than in nearly any other nation on Earth. 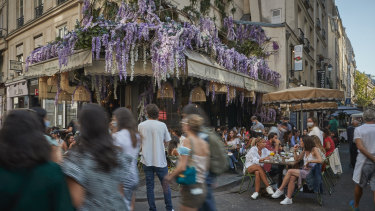 Parisians enjoy the late summer weather in packed cafes and restaurants despite the recent surge in COVID-19 infections.Credit:Getty Images

Australia has recorded just 1.06 cases of COVID-19 for every 1000 people. That compares to a world average of 3.85 cases per 1000 people and an equivalent 20 cases in the United States.

Grim milestones are being regularly passed during the pandemic, with the world recording 30 million positive cases on Friday. The United States hovers close to 200,000 deaths, and is recording anywhere between 20,000 and 50,000 new cases a day. In some cities like New York, schools are yet to reopen after closing in March. That’s six months of home-schooling, and counting.

In France, a new surge is generating 8000-10,000 new cases a day. After testing was finally made free in July, it is struggling to meet demand, with people waiting days to get tested. Last week, 5.4 per cent of tests resulted in positive cases, compared to about 0.1 per cent in Australia.

Demand for testing is also proving challenging in Britain as it records, with winter approaching, about 4000 new cases a day. In parts of northern England people are banned from mixing with other households. The number of people who can gather inside or outside your home has been reduced to six for the whole country.

Melburnians know better than most that strict lockdowns can prove effective at halting the spread of the virus. But they have learnt, too, that enforcing such strict social distancing comes at a huge economic and social cost. In Britain, like the United States, debates are raging over whether that burden is worth the health benefits. For many countries, the only way forward is to live with large numbers of outbreaks.

The Victorian government has chosen the long road out. It argues that unless the numbers of new infections are brought down to a very low level, the state runs the risk of another surge in cases. A third wave would not only be financially devastating, but would probably wipe out any confidence in the state government's ability to manage the pandemic.

A more cautious approach should result in relatively few cases down the track. But a far more rigorous contact tracing system will be needed than the one that failed to contain the second wave. Last week, Victoria's contact tracers travelled to NSW to view their "gold standard" systems. Hopefully lessons will be learnt.

As The Age reported this week, there is also support for localised contact tracing hubs in Melbourne. They should deliver a swifter, more targeted response and are already being used in Melbourne’s south-east to combat an outbreak in the municipality of Casey. We hope it proves an effective measure. Along with a continued commitment to following social distancing rules and further testing, this will be our best and only defence until a vaccine becomes available.

As we head into the warmer months, we must keep reminding ourselves not to be complacent. We owe it to our front-line health workers to continue to act responsibly. This will protect the systems we have put in place to contain COVID-19, and protect our freedoms too.

The Age’s acting editor, Michelle Griffin, writes a weekly newsletter exclusively for subscribers. To have it delivered to your inbox, please sign up here.