Walking the tightrope as NSW dices with Delta

Why now? That was the burning question Gladys Berejiklian failed to satisfactorily answer on Friday morning, announcing an end to daily 11am media briefings that have been a hallmark of the government’s response to the state’s crippling Delta outbreak.

As she herself warns, the darkest days for the health system lie ahead. She even had the head of the ambulance service, Dr Dominic Morgan, standing next to her on Friday acknowledging that right now every day is akin to the unrelenting demands of a New Year’s Eve for paramedics. 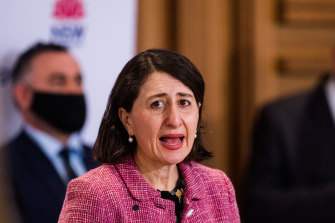 Now you see me: Premier Gladys Berejiklian on Friday.Credit:James Brickwood

Yet when Berejiklian most needs to maintain public trust, she cuts back the government’s exposure to questioning. Health department bureaucrats will instead present an information bulletin each morning while she and senior ministers will front the media only when “we need to communicate something very important”.

Meanwhile, the government has suspended Parliament and refused upper house sittings next week, despite approaches from Labor and the crossbenchers.

The controversial change in the government’s communications strategy comes as vaccination rates show signs of slowing. The rate of new people coming forward for a jab has dropped from around 1.5 per cent a day to 1 per cent, the Premier revealed on Friday. “We have seen in other places around the world that things start to slow down between 70 and 80 per cent … we do not want to see that here,” she warned.

Berejiklian and Chief Health Officer Dr Kerry Chant take the lion’s share of credit for chivvying NSW citizens into a position where the state now has a 77.3 per cent first dose take-up – heading towards 80 per cent next week. It makes the decision to walk away from the best platform they have for exhorting ever higher vaccination rates even harder to comprehend.

The government’s fortunes hang on the long -awaited and ambitious road map for easing the lockdown, unveiled to a weary populace on Thursday. It will kick in on the Monday after 70 per cent double vaccination has been reached. On current projections that could be as soon as mid-October, though few would take the gamble of fixing as precise a date as celebrity chef Luke Mangan, who announced plans for a black-tie dinner on October 20.

The suite of freedoms proposed at 70 per cent double dose (among those 16 and over) is broad. They encompass the re-opening (with capacity limits) of pubs, hairdressers, gyms, non-essential retail, cinemas and theatres, as well as allowing up to 500 people at outdoor events. There will be dancing at weddings with up to 50 guests, and up to 50 mourners at funerals. Masks are to be worn at indoor public venues.

It all comes wrapped in what one minister privately calls the “mother of all caveats”: that health authorities will be able to clamp down on movement if coronavirus cases surge in certain suburbs or areas. 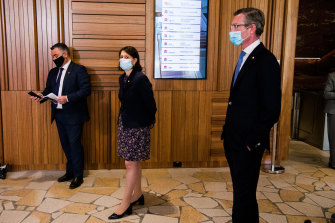 There was much enthusiastic spruiking from Treasurer Dominic Perrottet and Deputy Premier John Barilaro on Thursday, with a clearly relieved Treasurer anticipating an “incredibly bright summer”. The business community welcomed the news with open arms, with the Committee for Sydney hailing it as “the road map we desperately needed”.

“It’s basic behavioural science,” he says. “We are the first state to provide a road map out and every state will follow. We are trying to show the nation how we can open up to the world.”

Yet, it’s unquestionably a gamble, albeit a calculated one. There is a level of nervousness among some of Berejiklian’s senior colleagues that belies the outward confidence they can pull the tightrope walk off.

“At the end of the day it will depend on how our ICUs are tracking,” one senior government figure admitted to the Herald. “There is so much that could happen between now and then [the 70 per cent opening date]. This is the balancing act of trying to provide confidence and hope but being honest at the same time in the light of uncertainty”.

Berejiklian counts on the vaccine uptake kicking in quickly enough to put the brakes on case numbers and hospital admissions. Despite the insistence of Barilaro on Friday that public health advice had endorsed the road map, a senior government insider confirms Chant and her team remained worried about too much relaxation before a double vaccination rate closer to between 80 and 85 per cent. Chant danced around this when journalists attempted to grill her on Thursday, instead deflecting to underscore the need to get vaccination rates as high as possible.

She also avoided addressing whether she was comfortable sticking to the road map if the effective reproduction rate of the virus (the “Reff” or R rate) was above one at the time 70 per cent double dose is reached – ie still on a trajectory for increasing community transmission.

According to the University of Melbourne’s James McCaw, a modeller who advises the federal government, the current R value in NSW is 1.07. That remains a concern.

While first-dose figures in parts of the city’s west surge past 80 per cent, rates of vaccination in the city’s eastern suburbs and metro Sydney are low: 36 per cent of people in City of Sydney LGA have been fully vaccinated and only 60 per cent have had their first dose. Mosman has about 55 per cent of its residents fully vaccinated, Cumberland is at about 34 per cent.

Epidemiologist and global health researcher from the Australian National University Meru Sheel says another reason to take easing of restrictions cautiously is that unlike in Britain, where cases have risen but hospitalisations have so far been manageable, Australia has not had a high disease burden. The British populace “has naturally acquired immunity that Australia has not,” Dr Sheel says.

Modelling released by Melbourne’s Burnet Institute just last Monday projects ICU operations in NSW will tip over to “overwhelming” status in the next two months, with peaks of 3434 patients hospitalised and 947 patients in ICU.

Yet at the same time the city’s pubs will see the return of eager (vaccinated) drinkers, fuelled by the city’s warm pre-summer glow.

Brendan Crabb, director of the Burnet Institute, says the “assumption” in Monday’s modelling was that restrictions currently in place would be maintained. “If restrictions ease, that will affect the [model]” Crabb warns.

“In addition to high vaccination rates we need very effective test, trace, isolation and quarantine to keep numbers low; that is critical. And [these measures] can only work well if numbers are low. I understand the desperation to open and to reward people to get vaccinated but it needs to be balanced. In the end it will not be the government that will determine if another lockdown is needed, it’s pressure on the health system.”

Berejiklian frequently cites the national plan based on the Doherty Institute modelling as justification for the road map unveiled this week. Yet a close reading of Doherty shows it too recommends “optimal” test, tracing and isolation measures and “medium” settings for public health restrictions to ease at 70 per cent against the backdrop of a substantial case load.

Barilaro for his part is warning that if there is a single active case in towns or regions, that could send them back immediately into lockdown for 14 days. “That is the commitment we have made to Health,” he said on Thursday.

Sydney immunologist and public health expert Professor John Dwyer says there will have to be vigilant maintenance of public health measures throughout. Even at 80 per cent coverage, he warns, there is no “magic figure and that it’s over and done with”.