A flurry of positive coronavirus test results that emerged Friday including the president’s share a common nexus: the celebratory White House event where Donald Trump rolled out his nominee for the Supreme Court, Judge Amy Coney Barrett.

The September 26 gathering – which was filled with peans to textualism and conservative jurisprudence, as well as a family-centric national introduction to Barrett – also was silently harboring the deadly virus that has ripped its way through the nation.

Among those attending the outdoor announcement who would test positive were the president and first lady Melania Trump, who both appeared onstage for the formal introduction. The first lady also was seated next to two of Judge Barrett’s seven children, who flew to Washington for the event. 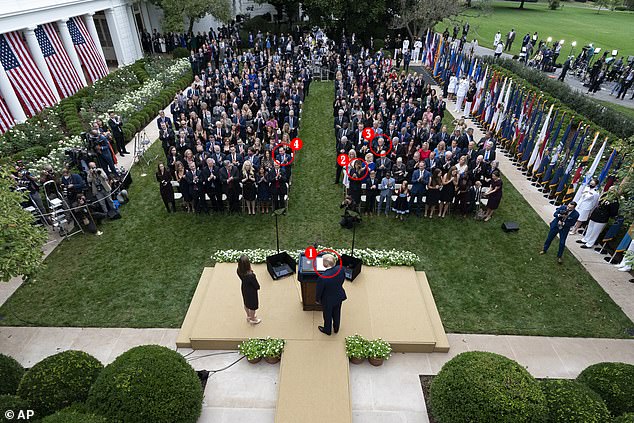 As of Friday, four people who tested positive for the coronavirus have been identified at Saturday’s White House announcement about President Trump’s Supreme Court nominee Amy Coney Barrett

University of Notre Dame President John Jenkins, who was also there, tested positive, it was revealed Friday. Barrett taught law at the school.

With new information coming in rapidly, and only a range of the incubation period for the disease, it was impossible to immediately tell if the Saturday event is where the president and the others became infected – or perhaps unwittingly spread it to others.

Close aide and counselor to the president Hope Hicks appears to have been pictured standing among a crowd of staff and supporters in the back.

None of those who later tested positive were seen wearing masks, and few of the attendees were.

Immediately after the event – where Republicans were nearly ready to declare victory on pushing through Barrett’s nomination – Trump flew to Harrisburg aboard Air Force One, another possible vector for infection.

The plane features tight quarters and shared spaces. The president came to the back of the plane to talk, according to a pool report filed by a DailyMail.com reporter who was traveling with the president.

Although the content of his remarks were off the record, he engaged in back-and-forth with the press for about ten minutes.

Lee was captured on video at the event chatting amiably with guests, mask in hand, although he wasn’t wearing it.

He was captured on video kissing and hugging other guests effusively.

Lee, a key ally of President Donald Trump’s revealed Friday he tested positive for the coronavirus.

The news, just the latest jarring news on a day of coronavirus bombshells, immediately threw the Senate GOP’s intense confirmation schedule for the Supreme Court into doubt.

Lee is a member of the Senate Judiciary Committee, and met its members on Wednesday for a hearing with James Comey.

As well as the possibility that its members – two of whom are 87 – may be advised to quarantine, the Senate has not voted on whether the SCOTUS nominee’s hearings can be held remotely.

Lee was among the throngs of supporters who joined Trump and Barrett at the White House Saturday as Trump staged a ceremony for the announcement.

He also reportedly met the judge on Tuesday – with the Judiciary Committee planning to meet within days with the aim of setting up a floor vote before the election. 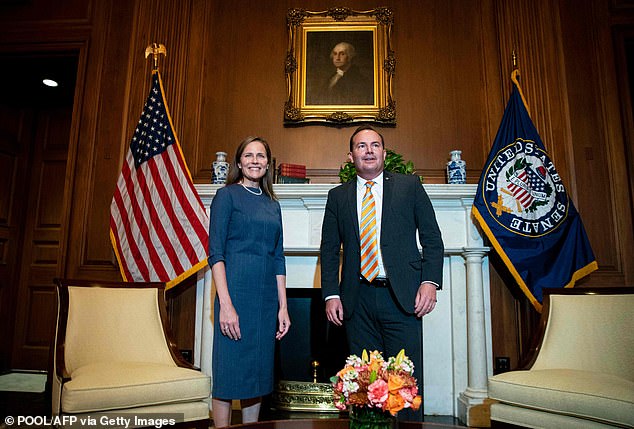 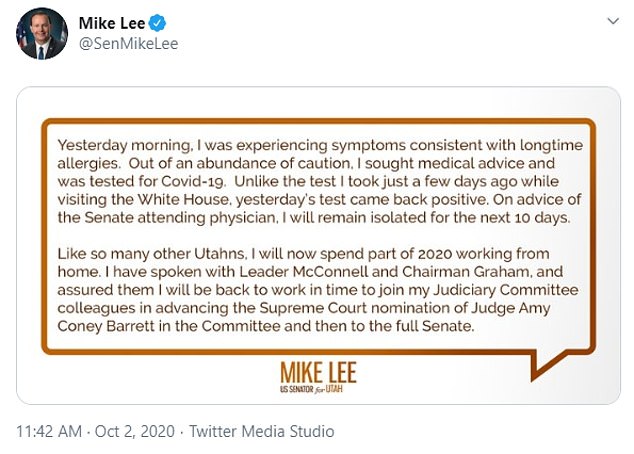 Lee tweeted that he took a Covid-19 test Thursday and that the ‘test came back positive.’ He did not say precisely when he got the results it or why he got tested Thursday 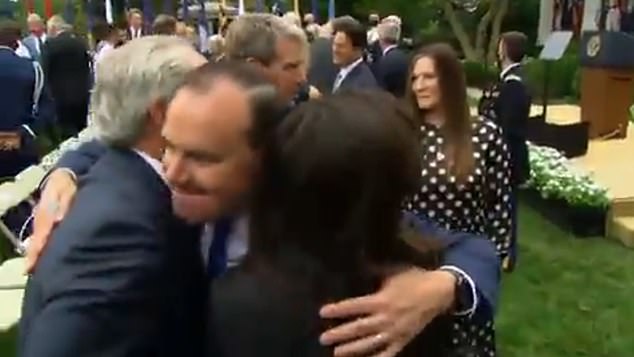 Mike Lee on Saturday: The Utah Republican senator was among the guests as Amy Coney Barrett was unveiled at the White House on Saturday as Trump’s Supreme Court nominee – where he enthusiastically greeted two other guests 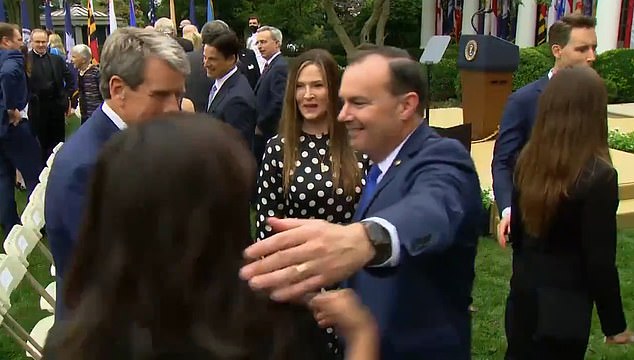 Effusive, and maskless: This was Mike Lee on Saturday – now he is quarantining after testing positive for coronavirus

Lee said in a statement he took a test ‘out of an abundance of caution’ after experiencing symptoms akin to allergies.

‘Unlike the test I took just a few days ago while visiting the White House, yesterday’s test came back positive,” Lee said in a statement. “On advice of the Senate attending physician, I will remain isolated for the next 10 days.”

He says he assured party leaders he will be ‘back to work in time’ to join them in ‘advancing the Supreme Court nomination’ of Barrett.

Video from Saturday’s announcement shows Lee, with a medical mask in his hand, shaking hands and speaking with supporters at the White House.

Lee tweeted out a photo of himself with Barrett, both unmasked, at his Senate office this week.

The New York Times reported that Lee met with Barrett on Tuesday, as she made the rounds with Republicans to try to secure her nomination.

Judiciary is set to meet on the nomination to begin hearings on October 12th. Sen. Dianne Feinsein (D-Calif.), has formally asked for a delay. Democrats howled at the effort to jam through the nomination so close to the election after the GOP stalled President Obama’s pick, Judge Merrick Garland, for nine months at the end of Obama’s term.

Republicans on Capitol Hill vowed to press forward with the Supreme Court nomination of Judge Amy Coney Barrett despite her coming into contact with President Donald Trump on Saturday.

Since then, the president and first lady have tested positive for COVID-19 and the top Senate Democrat, Sen. Chuck Schumer, has demanded that the White House ‘immediately conduct a contact tracing regime’ that includes Barrett and anyone she may have come in contact with.

Axios reported that Barrett tested negative for the coronavirus Friday morning, as GOP aides told the publication that Barrett’s confirmation process will continue as scheduled.

But Barrett also met with Sen. Mike Lee of Utah on Tuesday – and he announced Friday morning that he had a COVID test come back positive Thursday morning. 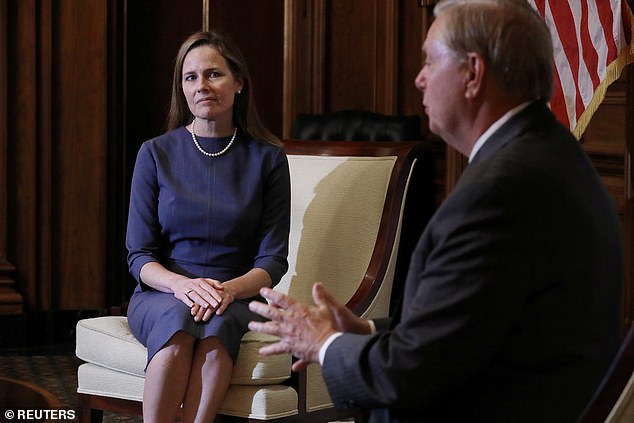 Republican senators, including Senate Judiciary Committee Chair Lindsey Graham (right), have vowed to press on with Judge Amy Coney Barrett’s (left) nomination for the Supreme Court, despite Barrett being in close contact with President Donald Trump on Saturday

Senate Majority Leader Mitch McConnell tweeted Friday morning that he had spoken on the phone with President Donald Trump who had asked about Amy Coney Barrett’s nomination. ‘Full steam ahead,’ McConnell reported to Trump 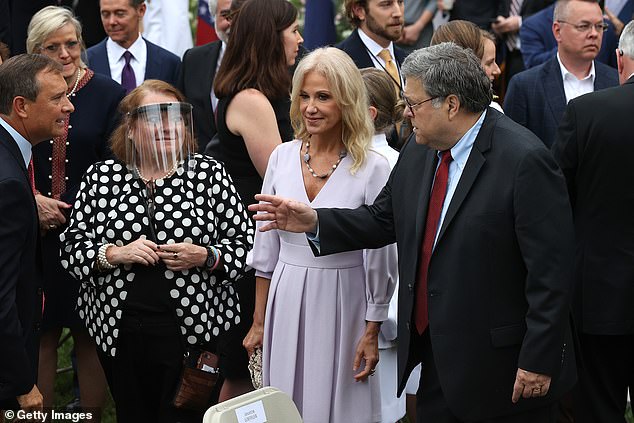 WASHINGTON, DC – SEPTEMBER 26: Counselor to the President Kellyanne Conway (C) and Attorney General William Barr (R) talk with guests in the Rose Gardn after President Donald Trump introduced 7th U.S. Circuit Court Judge Amy Coney Barrett, 48, as his nominee to the Supreme Court at the White House September 26, 2020 in Washington, DC. With 38 days until the election, Trump tapped Barrett to be his third Supreme Court nominee in just four years and to replace the late Associate Justice Ruth Bader Ginsburg, who will be buried at Arlington National Cemetery on Tuesday. (Photo by Chip Somodevilla/Getty Images) 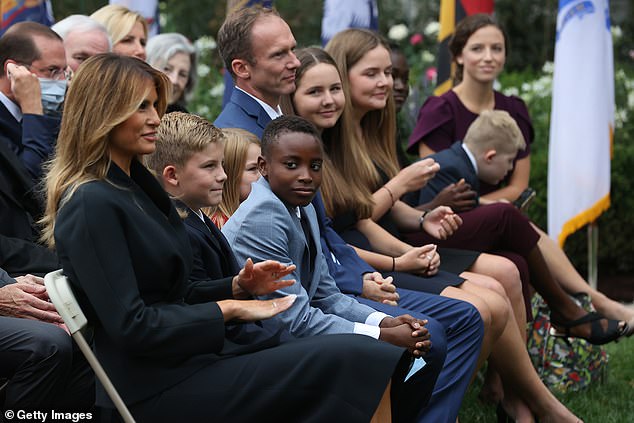 First lady Melania Trump, who tested positive for COVID-19 in results made public Thursday, was seated next to one of Barrett’s children

‘Just finished a great phone call with President Trump. He’s in good spirits and we talked business – especially how impressed Senators are with the qualifications of Judge Barrett,’ McConnell tweeted.

‘Full steam ahead with the fair, thorough, timely process that the nominee, the Court, & the country deserve,’ McConnell said.

Graham also said he had spoken with the president Friday morning and was asked by Trump about the Barrett confirmation.

‘We’re on track, we’re in a good spot, she’s going to get confirmed and we’ll start on Oct the 12th,’ Graham said he told the president.

Even Lee, after testing positive, vowed to return to his work on the Judiciary Committee in order to get Barrett’s nomination over the line.

Part of the traditional nominating process for a Supreme Court justice is in-person meetings with U.S. senators.

Most are at risk for COVID-19 because of their advanced ages.

Barrett’s confirmation hearings will have a virtual option for any senator who feels high-risk.