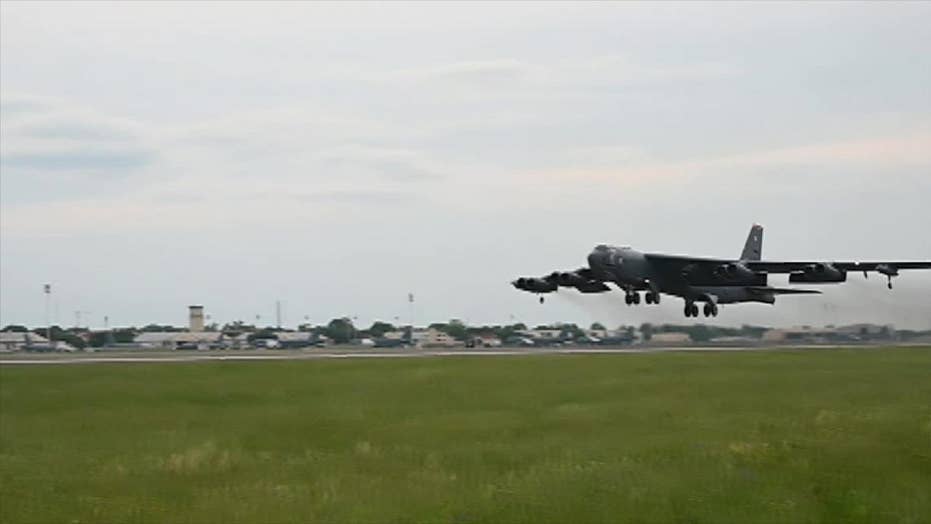 Raw video: Pentagon releases video of bombers from the 2nd Bomb Wing based at Barksdale Air Force Base in Louisiana heading to Al Udeid Air Base in Qatar.

The Pentagon released a new video Wednesday showing four nuclear-capable B-52 bombers taking off for the Middle East as part of the Trump administration's effort to deter what officials call a "credible threat" from Iran.

The White House said it dispatched the aircraft carrier USS Abraham Lincoln and the bombers to the Persian Gulf over what it described as a new threat from Iran.

On Wednesday, President Trump announced new sanctions targeting Iran's steel, aluminum, copper and iron sectors and vowed to continue a campaign of "maximum pressure" against Tehran until it stops supporting terror groups, ends destabilizing activities in the region, gives up any nuclear weapons efforts and ends development of ballistic missiles.

"We call on the regime to abandon its nuclear ambitions, change its destructive behavior, respect the rights of its people, and return in good faith to the negotiating table," Trump said.

Earlier Wednesday, Iran threatened to enrich its uranium stockpile closer to weapons-grade levels in 60 days if world powers fail to negotiate new terms of the 2015 nuclear deal. Trump pulled out of the deal a year ago, but the other nations involved — China, France, Germany, Great Britain, and Russia — stayed in.

Fox News' Lucas Tomlinson and the Associated Press contributed to this report.