Singapore: Singapore’s Prime Minister has warned that most south-east Asian countries don’t want to be made to choose between the United States and China – while raising fears of a nuclear “arms race” in Asia.

The long-time leader of the city-state was speaking on Thursday after US President Joe Biden wound up a visit to Asia during which he met with new Prime Minister Anthony Albanese in Tokyo and joined the Australian leader and their counterparts from Japan and India for a meeting of the Quadrilateral Security Dialogue. 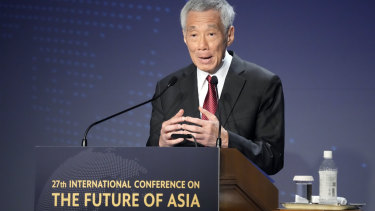 China has turned its attention to extending its strategic foothold in the Pacific, with Beijing outlining ambitions to establish security ties with as many as 10 countries in the region and Foreign Minister Wang Yi beginning a 10-day tour.

South-east Asia is already well versed in the competition for influence between superpowers and Lee said that most nations in the region did not want to pick sides.

“It’s natural for some countries to be closer to one side or the other but most countries would prefer not to be forced to choose between the US and China,” he said at the Nikkei Future of Asia conference in Japan.

“There will be no good outcome if Asian countries are split between the two camps, each siding with one or the other. A more stable, less tense configuration is for the two powers to have overlapping circles of friends.”

Countries such as Singapore, Indonesia, the Philippines and Malaysia have attempted to perform a delicate balancing act amid rising geopolitical animosity and Chinese aggression in the South China Sea. Some have established defence ties with the US but many have increasingly strong economic links with Beijing. 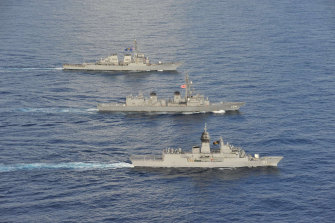 Australian, US and Japanese warships sail together in the South China Sea. The US wants to step up activity with its allies in the region.Credit:

Singapore is one of seven ASEAN nations – the others are Indonesia, Malaysia, the Philippines, Thailand, Vietnam and Brunei – that have signed up to Biden’s new Indo-Pacific Economic Framework, which was unveiled during his visit to Japan this week and which is being viewed as another vehicle to counter China in the region.

Lee said countries needed to work together to strengthen their collective security “beyond forming alliances and groupings of like-minded partners like the Quad or the AUKUS group”.

“If US-China relations continue on this path, it will lead to further bifurcation of technology and splitting of supply chains, or even worse unintended consequences,” he said.

He also used his speech in Tokyo to express concern about a build-up of more tension around the Korean peninsula.

While in Seoul this week, Biden vowed to defend Japan and South Korea and reinforce deterrence against the nuclear threat from North Korea. But only hours after he flew out on Monday, the hermit state test-launched a suspected intercontinental ballistic and two shorter-range weapons into waters east of the Korean peninsula.

But Lee warned that reactions to provocation from North Korea had to be approached from a regional perspective.

“In Japan and South Korea, sensitive issues are being raised publicly, including whether to allow [US] nuclear weapons to be deployed on their soil, or even go a step further and build capabilities to develop such weapons,” Lee said.

“But if we only look at regional security from the perspective of individual nations, we may end up with an arms race and an unstable outcome.”