Washington: White House Press Secretary Sarah Huckabee Sanders is leaving the Trump administration after a turbulent tenure marked by attacks on the media, dissemination of false information and the near-disappearance of the daily press briefing. 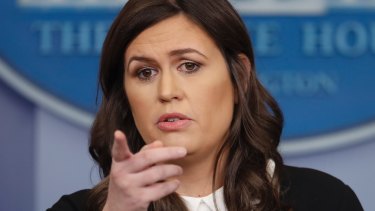 "After 3 1/2 years, our wonderful Sarah Huckabee Sanders will be leaving the White House at the end of the month and going home to the Great State of Arkansas," President Donald Trump said Thursday in a tweet.  [Trump has been president for two-and-a-half years].

Sanders, 36, took over the role as top White House spokeswoman after her predecessor, Sean Spicer, abruptly resigned in July 2017.

While Sanders proved a more effective and composed carrier of President Donald Trump's message than Spicer, she maintained the administration's publicly antagonistic approach to reporters and regularly ran afoul of the facts.

Sanders also disappeared largely from the public eye in recent months, holding only two of the once-daily White House press briefings since the beginning of 2019. Trump explained her absence in a January tweet saying that she no longer briefed reporters because "the press covers her so rudely."

"I told her not to bother, the word gets out anyway," Trump wrote. 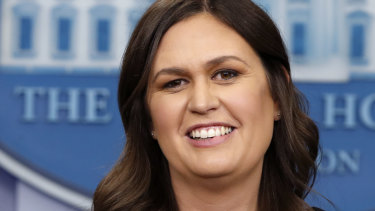 Instead, Sanders would occasionally book appearances on Fox News and hold brief question-and-answer sessions with reporters on the driveway of the White House.

But while the press secretary spent less and less time with reporters, her influence grew within the West Wing, where she was a trusted confidante of the president who was regularly consulted as Trump crafted messaging strategy.

She's also among the longest tenured of an inner circle that has experienced record turnover among senior staff.

Several other press and communications officials have recently left the White House, where the president's mercurial nature has often made it difficult to speak with authority on his behalf.

Trump acknowledged that tension in a May 2017 tweet: "As a very active President with lots of things happening, it is not possible for my surrogates to stand at podium with perfect accuracy!"

The Arkansas native often took Trump's combative approach into the White House media briefing room. While she frequently sidestepped substantive policy questions, she regularly came to briefings with prepared remarks lambasting reporters and their coverage of the president.

"Repeatedly the media resorts to personal attacks without any content other than to incite anger," Sanders said on August 2, during a heated exchange over Trump's repeated references to the media as "the enemy of the people."

"The media continues to ratchet up the verbal assault against the President and everyone in this administration," she said.

Sanders often found herself defending Trump's most incendiary remarks and actions, a balancing act that occasionally led her astray of the facts.

In response to a question about whether Trump had used a racial epithet in the past, Sanders said in August she couldn't guarantee that he hadn't, then proceeded to state falsely that Trump had created three times as many jobs for black Americans as President Barack Obama. She later corrected the error in a tweet.

Sanders told reporters in August 2017 that Trump "didn't dictate" a misleading statement from his son, Donald Trump jnr, about a meeting with a Russian lawyer during the 2016 campaign. The president's lawyers said in 2018 that Trump indeed dictated the letter.

Asked about the discrepancy on June 5, Sanders attacked the media and referred questions to the president's outside counsel.

"Frankly, I think my credibility is probably higher than the media's," she said. " I think that if you spent a little bit more time reporting the news instead of trying to tear me down, you might actually see that we're working hard trying to provide you good information."

The frequency of press briefings slowed down considerably after that day.

While briefings took place on an almost daily basis in previous administrations — and in the early months of the Trump administration — a month can go by without one.

Ahead of the 2018 midterm elections, Sanders facilitated dozens of interviews and press gaggles with Trump, saying he was the best spokesman for his administration.

Sanders, who has three young children, was the first working mother to serve as White House press secretary — a theme she regularly invoked during press briefings.

"As a working mom, it's not lost on me what a great honour and privilege it is to stand here at the podium," she said shortly after being named to the job in July 2017.

Sanders was also subject to withering criticism as the spokeswoman for an unpopular president, who has often attacked women with unflattering terms. She faced online harassment, was ridiculed by late night comedians and was asked to leave a Virginia restaurant.

"As far as I know, I'm the first press secretary in the history of the United States that's required Secret Service protection," Sanders said.