Why are police STILL not making people wear masks on Tube?

Why are police STILL not making people wear masks on Tube? Officers employ softly-softly approach to ‘encourage’ passengers to follow rules… as BTP refuses to reveal if they’ve even fined a single flouter

Britons using public transport are risking £100 fines by still not wearing face masks four days after the Government made them mandatory for everyone.

Some 3,000 British Transport Police officers have been deployed to the busiest rail stations this week to ensure all passengers are complying with the new rules.

But social media users have tweeted photographs of passengers not wearing a mask while on the London Underground despite the regulations coming in on Monday. 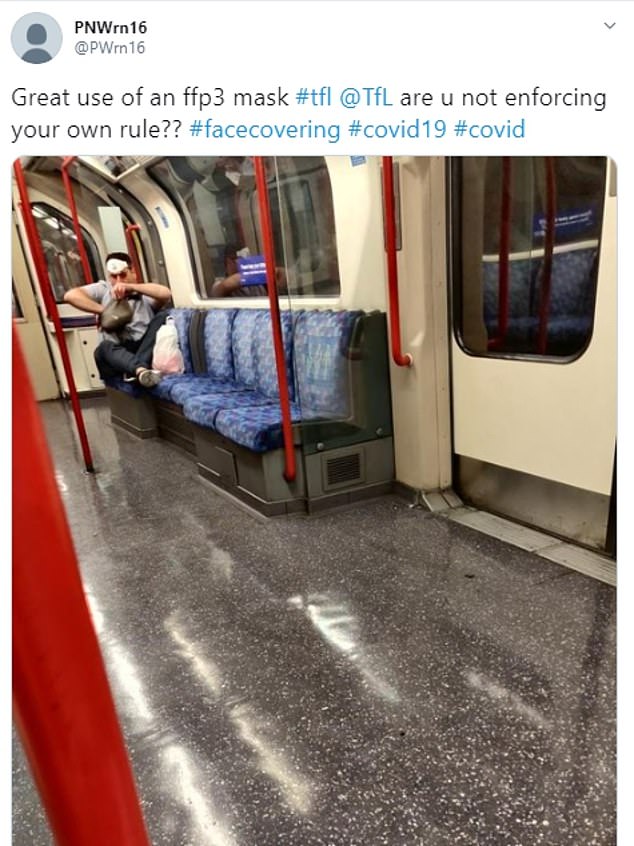 One Twitter user posted a picture of a man on the Central line in London with the mask above his mouth, saying: ‘Great use of an FFP3 mask. TfL, are you not enforcing your own rule?’ 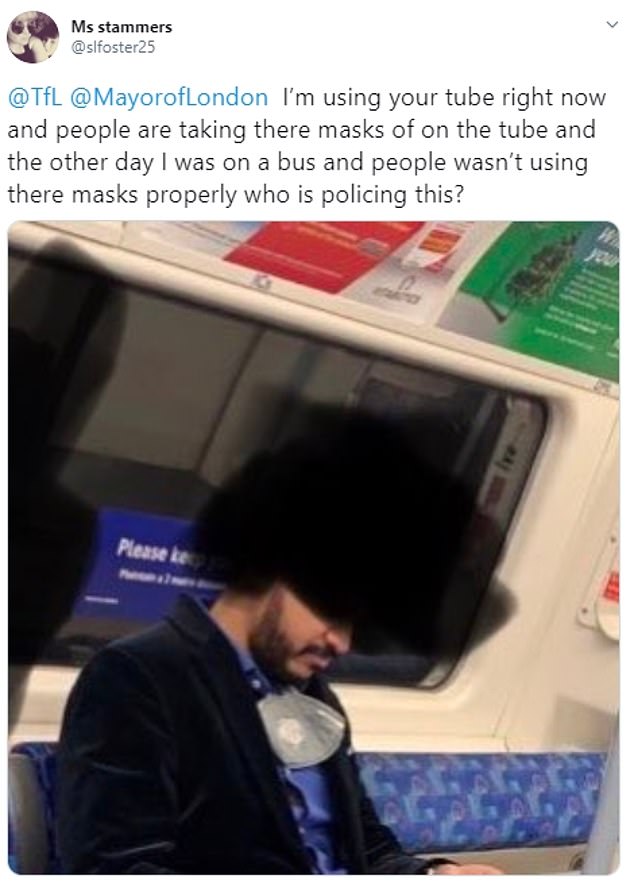 Another Twitter user added: ‘TfL, Mayor of London, I’m using your Tube right now and people are taking their masks off on the Tube. And the other day I was on a bus and people weren’t using their masks properly. Who is policing this?’ 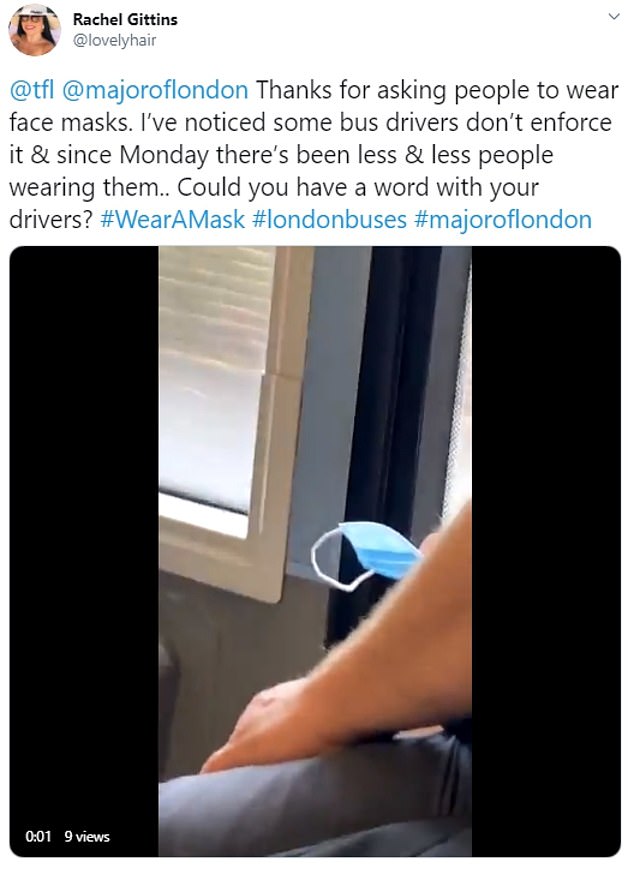 A third Twiter user said: ‘TfL, Mayor of London, thanks for asking people to wear face masks. I’ve noticed some bus drivers don’t enforce it and since Monday there has been less and less people wearing them. Could you have a word with your drivers?’

One posted a picture of a man on the Central line with the mask above his mouth, saying: ‘Great use of an FFP3 mask. TfL, are you not enforcing your own rule?’

Another Twitter user added: ‘TfL, Mayor of London, I’m using your Tube right now and people are taking their masks off on the Tube. And the other day I was on a bus and people weren’t using their masks properly. Who is policing this?’

And a third tweeted: ‘TfL, Mayor of London, thanks for asking people to wear face masks. I’ve noticed some bus drivers don’t enforce it and since Monday there has been less and less people wearing them. Could you have a word with your drivers?’

Guidance given to officers on Monday gave constables the power to use ‘reasonable force’ to pull passengers off trains and buses if they refuse to wear face masks.

The National Police Chiefs’ Council and the College of Policing said those that flout the restrictions risk £100 fines but these should only be issued as a ‘last resort’.

Police are taking a soft approach this week with passengers gently reminded of the rules, but could resort to tougher enforcement later in the month as numbers rise. 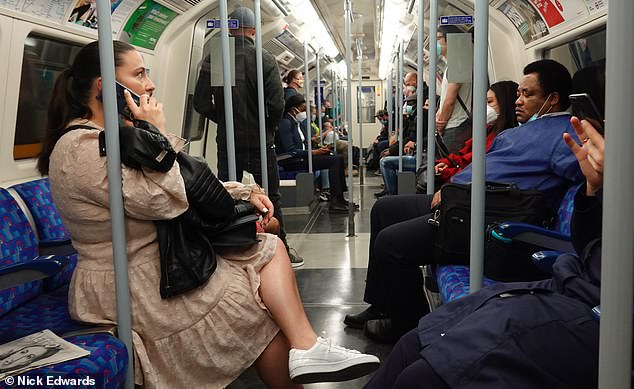 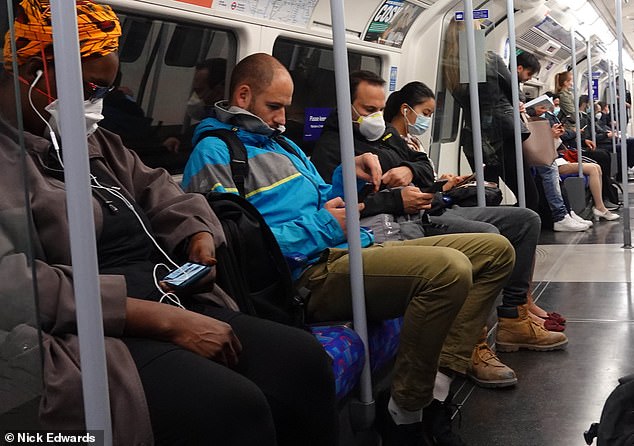 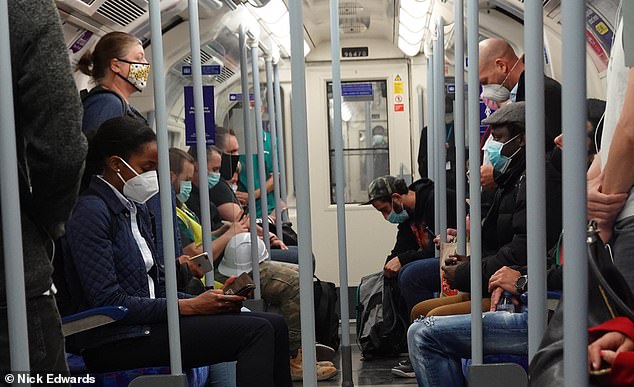 On Monday, one major operator said up to 15 per cent of passengers were not wearing masks, but there were ‘high levels of compliance’ overall with teams of transport staff and police handing out free masks to passengers without them.

The new rules have been enshrined under the same public health legislation used to fine people who flouted lockdown rules at the beginning of the outbreak. This means it is the responsibility of police, and not transport staff, to enforce them.

BTP has so far failed to tell MailOnline whether it has issued a single fine, instead saying that the NPCC is expected to reveal the figures every fortnight.

But a spokesman said on Monday: ‘Much like the coronavirus legislation in March, the priority will be to engage, explain and encourage people to wear coverings.’

The mask rule was announced by Transport Secretary Grant Shapps on June 4 and was timed to coincide with the reopening of non-essential shops in England. 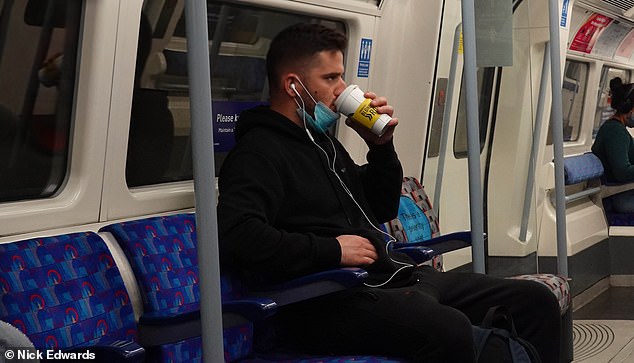 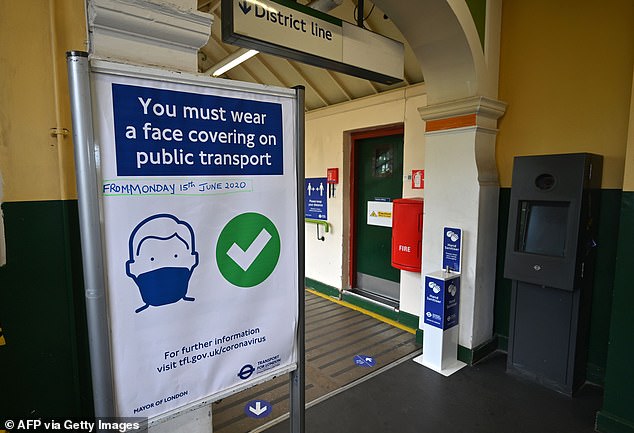 He said it was needed to help control the spread of the virus, but ministers and scientists have been divided on the public health benefits of wearing face masks.

On April 24, Health Secretary Matt Hancock said the evidence for their use by the public was ‘extremely weak’.

The Government’s Sage advisory group concluded that, although there was little evidence a mask would protect the wearer, it might offer protection to others.

London Mayor Sadiq Khan wrote to the Prime Minister calling for the change, arguing that the measure was supported by scientific studies and had already been adopted in countries across Europe. 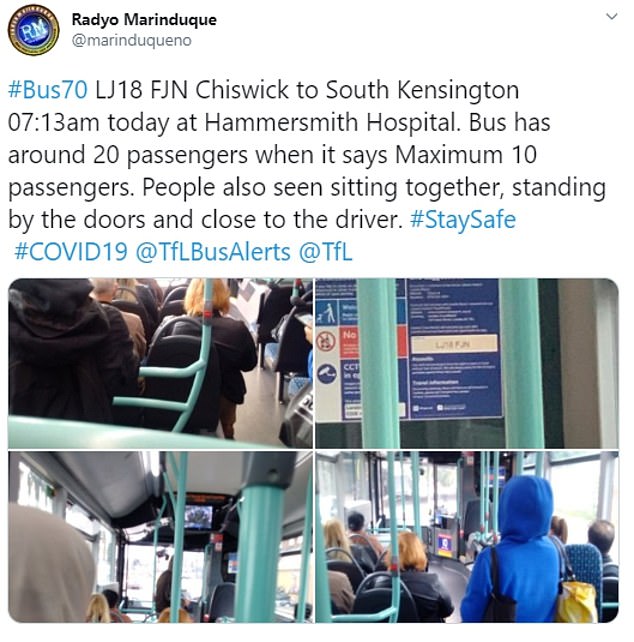 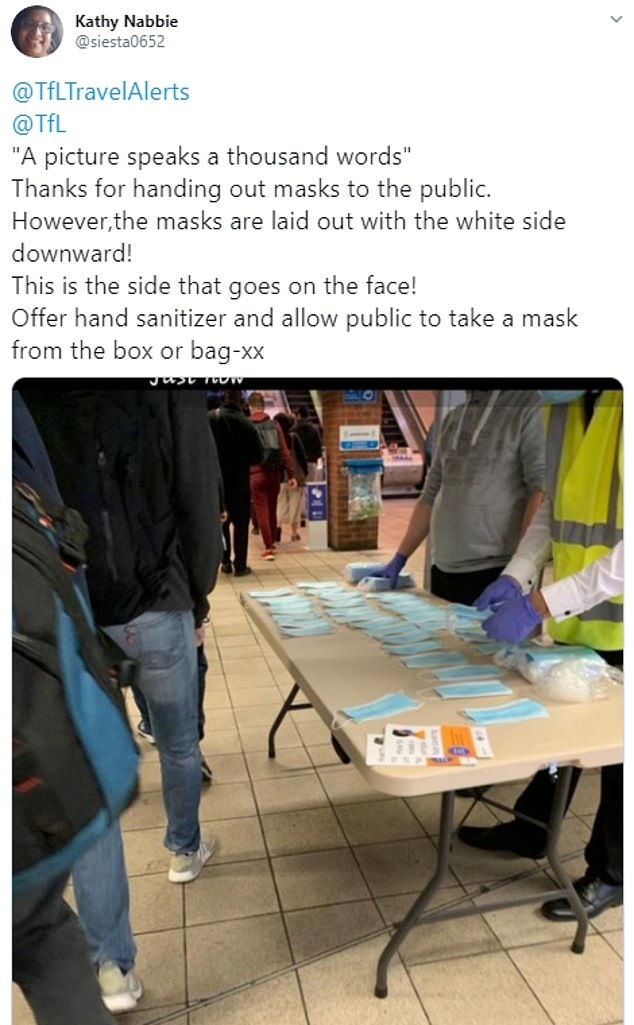 And Nicola Sturgeon, the Scottish first minister, urged shoppers to cover their faces as she revealed she was considering making the use of masks mandatory.

Non-essential shops in England were given permission to open on Monday and further easing of the lockdown is expected next month, with bars and restaurants hoping to welcome customers from July 4.

Meanwhile, the British Medical Association chief said all employers should ensure face coverings or screens are used by staff where social distancing is not possible.

This would allow parts of the population which are over-represented in sectors involving close contact with the public or other workers to be properly protected from coronavirus, said BMA chairman Dr Chaand Nagpaul.

He warned that Covid-19 has not disappeared and employers must ensure their staff are ‘properly looked after’ as they return to work and lockdown is eased.

How can you make your own cloth face covering?

A cloth face covering should cover your mouth and nose while allowing you to breathe comfortably. It can be as simple as a scarf or bandana that ties behind the head.

Wash your hands or use hand sanitiser before putting it on and after taking it off and after use. Avoid touching your eyes, nose, or mouth at all times and store used face coverings in a plastic bag until you have an opportunity to wash them.

You should wash a face covering regularly. It can go in with other laundry, using your normal detergent.

When wearing a face covering, take care to tuck away any loose ends. 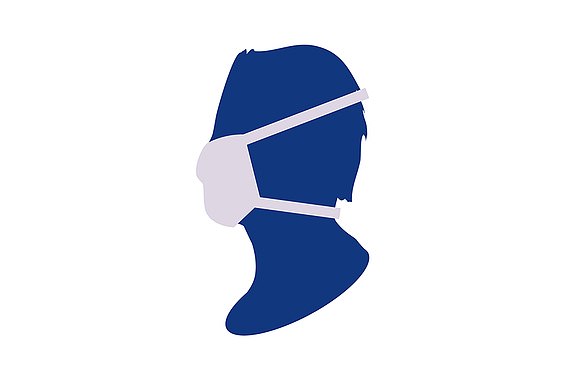 Making your own face covering 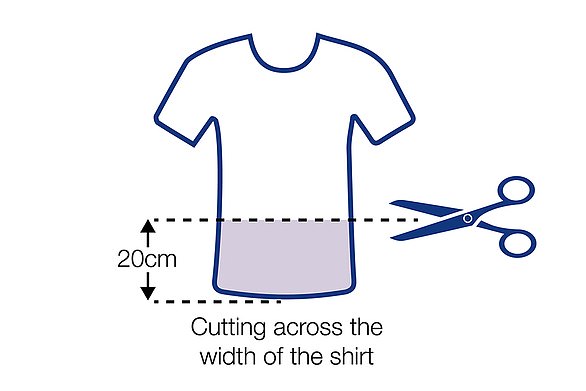 Step 2: From a point 2cm below the top right-hand corner of the fabric, make a 15cm horizontal cut through both sides of the fabric that is parallel to the top of the rectangle. 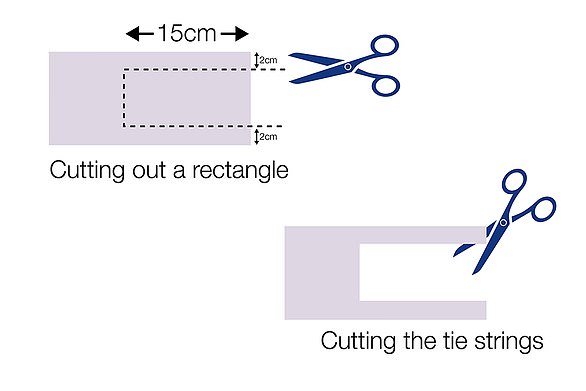 Step 4: To make the ties, cut open the edge of the 2 long strips of fabric. Unfold the main piece of fabric and place over the mouth and the nose. The 4 strips act as ties to hold the cloth face covering in place and should be tied behind the head and around the neck. 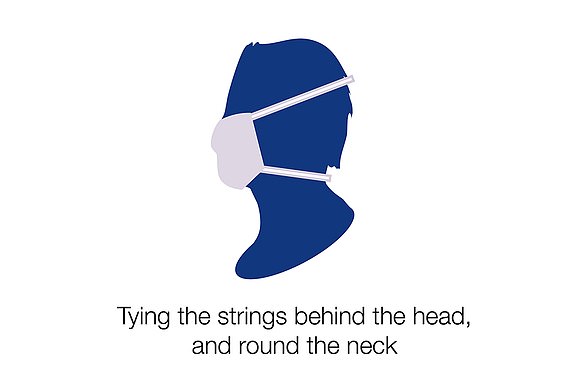 two 20cm pieces of elastic (or string or cloth strips) 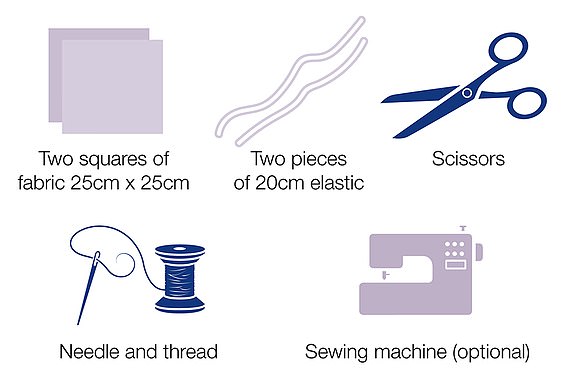 Items you need for a sewn cloth face covering

Step 1: Cut out two 25cm x 25cm squares of cotton fabric. Stack the 2 squares on top of each other.

Step 2: Fold over one side by 3/4 cm and hem, then repeat on the opposite side. Make 2 channels by folding the double layer of fabric over 1.5cm along each side and stitching this down. 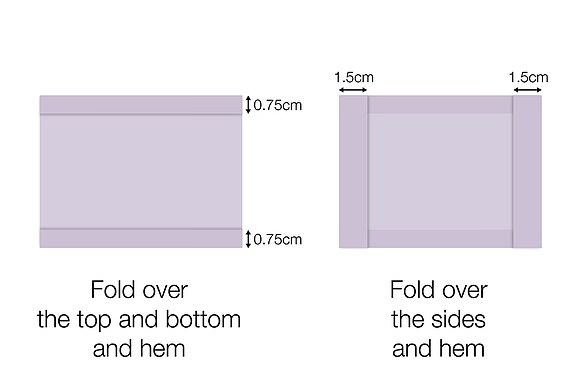 Step 3: Run a 20cm length of elastic (or string or cloth strip) through the wider hem on each side of the face covering. These will be the ear loops. Use a large needle to thread it through. Tie the ends tightly. 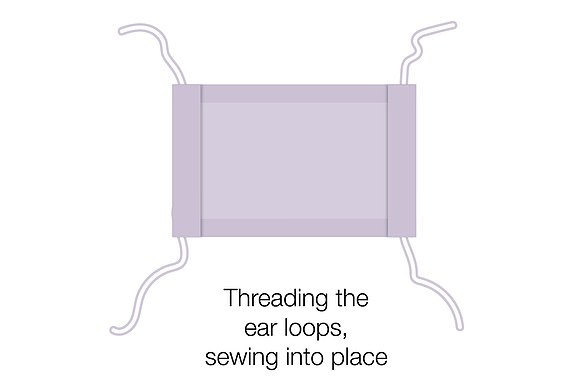 If you only have string, you can make the ties longer and tie the covering behind your head. 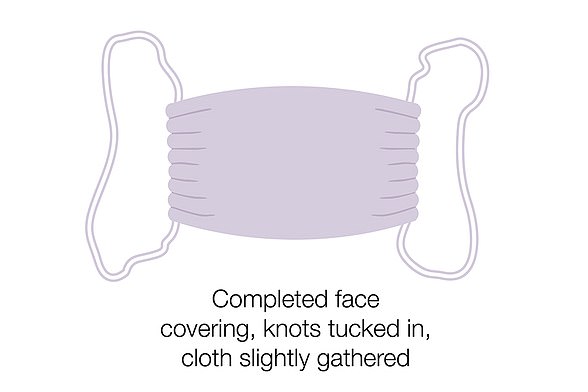 This information is a guide to making a simple face covering. We do not endorse any particular method and other instructions are widely available online. Always take care to use equipment safely to avoid injury. Children should only follow these instructions under the supervision of adults.