The widow of Anastasios Tsakos — the NYPD cop killed by a drunk driver — sobbed as she remembered her beloved hubby as “the love of my life” and an “awesome dad” at his funeral Tuesday.

“I wish we had more time — to watch our kids grow,” Irene Tsakos said in front of mourners at the packed Saint Paraskevi Greek Orthodox Shrine Church in Greenlawn. “I wish we could grow old together. That was the plan, but you were taken from us too soon.” 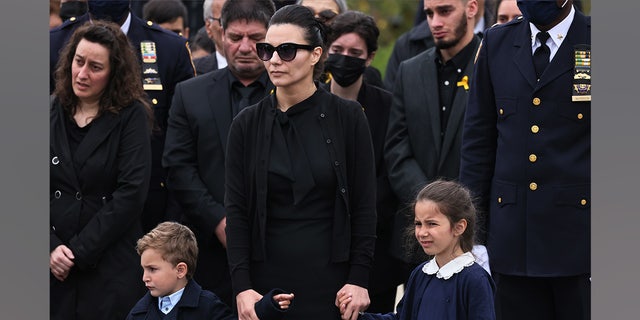 Irene Tsakos holds the hands of her children as she watches NYPD officers fold an American flag that draped the casket of her husband NYPD Officer Anastasios Tsakos during his funeral service at St. Paraskevi Greek Orthodox Shrine Church on May 04, 2021 in Greenlawn, New York.
(Getty Images)

She fought back tears as she continued about their two children, ages 3 and 6, “And now our kids will grow up without their dad, without their awesome dad. They will never forget. I will make sure of that.

“Tasos, you are the love of my life,” Irene choked, while bursting into tears. “I hope I made you proud.”

American and Greek flags stood side by side at the front of the Long Island chapel, next to Tsakos’ flower-draped open casket and a large portrait of the 43-year-old officer.

A massive wall of police officers lined the road outside the church.

“We are shocked, scared, angered at the unfairness and senselessness that took him from us,” NYPD Commissioner Dermot Shea told mourners at the funeral.

“We seek to make sense of this to understand why this happened. What plan could have been part of it? What possible lesson could be gleaned from this?” Shea said. “We cry out, ‘Well, God certainly knows his plan.’ We do not. And although Tasos may be in a better place, we want him here with us.”

The top cop said Tsakos’ commitment to the job was so strong that the 14-year department veteran had not called in sick for nearly a decade and went to court to testify on cases on his own time.

After the emotional service, Tsakos’ mother and widow broke down crying over his casket.

Tsakos, 43, was directing traffic on the Long Island Expressway after an earlier car accident when police said he was struck and killed by a 2013 Volkswagen driven by Jessica Beauvais, who allegedly admitted she was driving drunk. 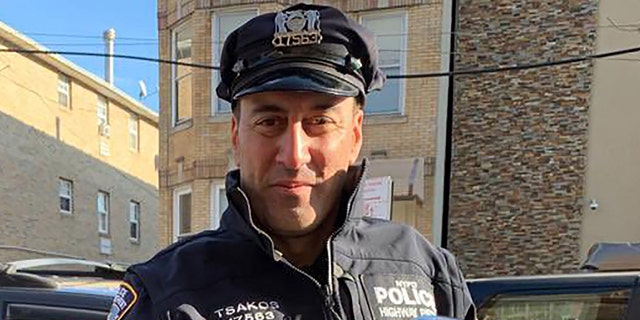 Tsakos had responded to assist at the scene of a fatal automobile collision on the Long Island Expressway when he was struck by Beauvais, police say.
(NYPD)

Beauvais, 32, faces 13 charges, including manslaughter, vehicular manslaughter and driving while intoxicated, and is being held without bail.

Among the dignitaries who spoke at the slain cop’s funeral was Mayor Bill de Blasio, who called the fallen officer “a Greek hero for our time.”

“We’re all mourning right now,” de Blasio said. “We’re all in pain right now. It does not make sense that such a good man in every way could possibly be gone.”

Archbishop Elpidophoros, of the Greek Orthodox Church of America, heralded Tsakos’ service to the city — at one point drawing a round of applause after referring to the NYPD as the world’s finest.

“There is no justice on this Earth that can bring him back to us,” the archbishop said. “Officer Tsakos looks down today from heaven, looks down on all of you. In your tears, in your pain, in your righteous anger and your deepest sorrow, Tsakos is present.”

Thousands of police officers were present for the funeral procession, coming from as far away as Fairfax, Virginia. 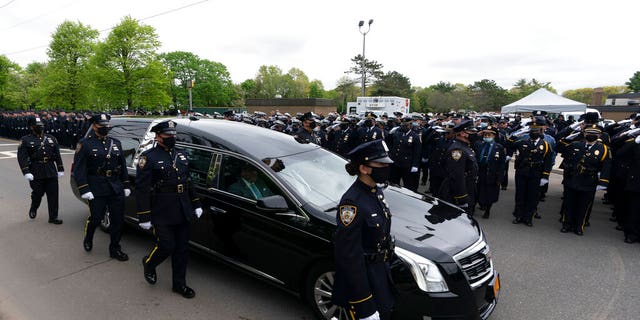 “Any time that we lose a police officer, a firefighter, or a fire officer, it’s important that we show our solidarity with our brothers and sisters,” said Jake Lemondo, president of the New York City Fire Officers Association.

“There’s nothing that will ever bring him back, but at least his family will know that he will never be forgotten by those who serve side by side.”

An eyewitness to Tsakos’ death told The Post last week that Tsakos was thrown into the air and hurled more than 100 feet away, as prosecutors alleged Beauvais hit the cop at a high rate of speed.

Truck driver Dan Miller said the impact was so violent that Tsakos’ leg was severed and both of his patrol boots were blown off his feet.

The cop was remembered by his brother, Teddy, as “an amazing guy” after the deadly incident.

Tsakos, who was assigned to the department’s highway unit, leaves behind his wife and two young children.