Nigel Farage could help keep Boris Johnson in power amid signs today that his Brexit Party is succeeding in sucking votes away from Labour in Leave-supporting areas.

Mr Farage stood down candidates contesting Tory-held constituencies but continues to take the battle to Jeremy Corbyn ahead of the December 12 general election.

And there are signs that it is working, with Labour’s Melanie Onn facing losing her Great Grimsby seat on the North Sea to the Conservatives, despite a 2,565 majority.

The Labour vote is down 18 per cent according to a Survation poll for the Economist in an area which voted 71 per cent for Leave in 2016. 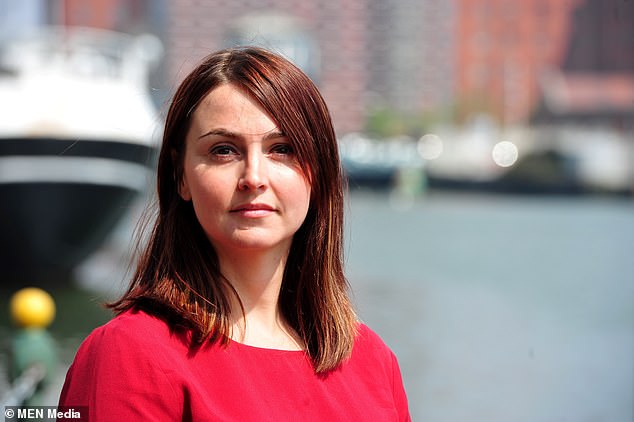 Labour’s Melanie Onn facing losing her Great Grimsby seat on the North Sea to the Conservatives, despite a 2,565 majority 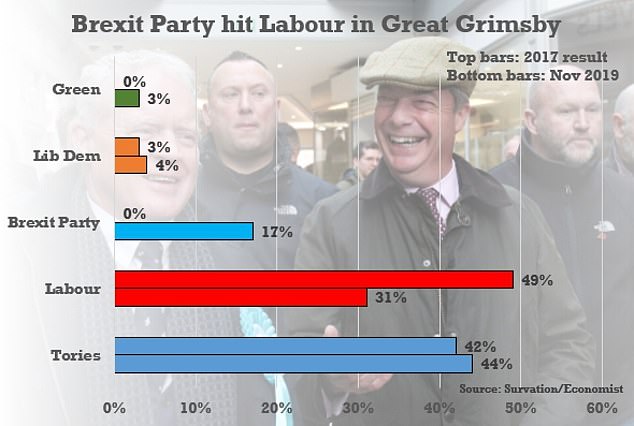 The same poll showed that most of the vote appears to have leeched to the Brexit Party, which is up from zero to 17 per cent, with the Tories only up two per cent to 44 per cent.

Meanwhile a nationwide poll by Ipsos Mori today showed Boris Johnson’s party has a 16-point lead over Labour with three weeks to go to the election.

Support for the Conservatives stood at 44 per cent, up three points from last week’s poll, and that Labour was up four points at 28 per cent.

It came as Labour hinted it would keep freedom of movement even if the UK leaves the European Union as Jeremy Corbyn again refused to say whether he was for or against Brexit.

Mr Corbyn launched his party’s 2019 general election manifesto at an event in Birmingham as he confirmed he will offer voters a second referendum on Britain’s divorce from Brussels if he forms the next government.

But he risked Leave voter fury as his 107-page vision for the UK finally set out the party’s position on border control. 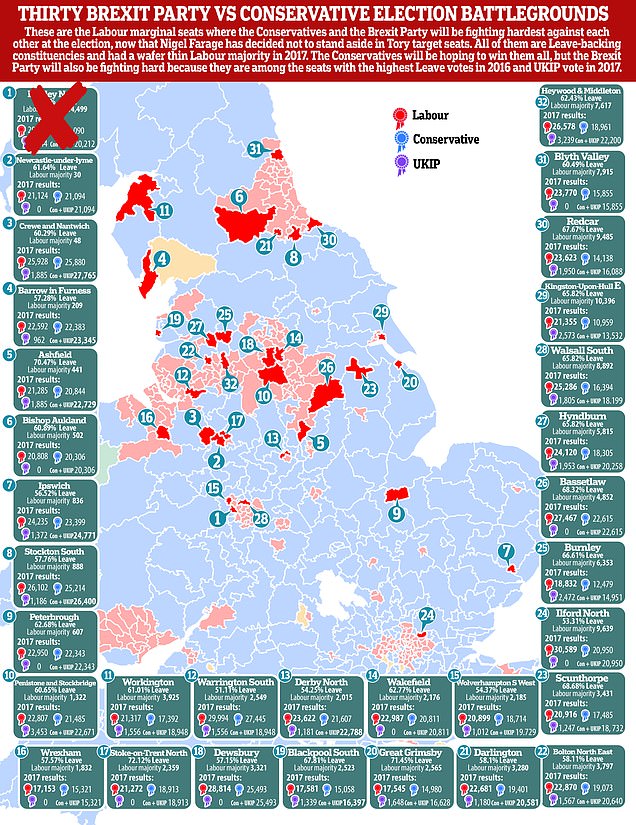 The manifesto states that if Britain votes to stay in the bloc then ‘freedom of movement would continue’.

It then states that if the nation confirms that it wants to quit the EU then freedom of movement ‘will be subject to negotiations’.

The blueprint then notes the ‘social and economic benefits that free movement has brought’ and that ‘we will seek to protect those rights’.

That appears to be a clear hint that uncontrolled migration from the EU to the UK could continue under a Labour government even after Brexit.