We are seven years on from the day Donald Trump rode down the gaudy gold escalator from hell to announce his presidential candidacy. The cancerous conspiracies and the social, political and moral pestilence he unleashed on the US persist. The country will vote in its midterm elections on November 8 and there is, god help us all, a chance the Republican Party that Trump now controls will come back to some appreciable power in Washington.

This is not good for anyone who views Trump and his confederacy of dunces as a menace to democracy. 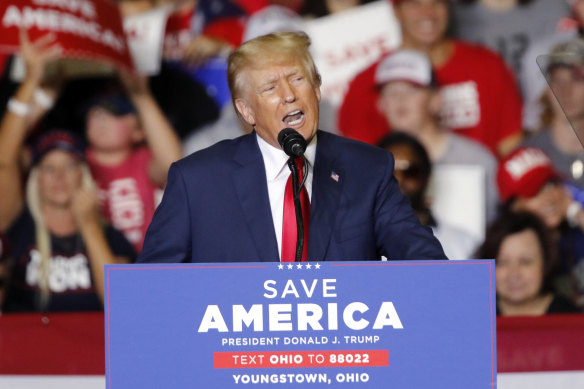 And yet, as further proof we are still living in Trump’s crazy world, the plain fact is that this unexpected rise back to power is facing one major impediment – and that is Donald Trump himself.

You will recall that the Democrats and President Joe Biden hold narrow control of the US Senate. The party can afford to lose not even one seat. And in the House of Representatives, the party holds a slim margin of five seats.

Traditionally in American politics, a president facing his first midterms (and particularly a president holding both houses of Congress) is in a vulnerable position. Voters like to keep things in balance. A new president as a rule gets a political haircut two years in. Not infrequently, it’s a severe one. (Trump lost the Republicans 42 seats in 2018.)

Biden’s approval rating is miserable, though he doesn’t deserve it. Inflation, at least in part a hangover from Trump’s shoddy handling of the coronavirus epidemic, is hitting the country. A rise in crime that began under Trump’s presidency is now being used as a cudgel against the Democrats. Everything is lined up to deliver to Biden & Co a shellacking.

But there’s a strange dynamic at work. The US Supreme Court overturned the right to have an abortion a few months ago; this was a seismic political event directly attributable to the three Supreme Court justices Trump appointed. Meanwhile, the January 6 committee hearings have reminded us all of Trump’s grievous activities before, during and after the Capitol insurrection.

And Trump appears in the news almost daily with a baroque slate of legal troubles. (Or more than daily: as I write, The New York Times has major stories on three separate Trump imbroglios at the top of its front page.) His craven myrmidons in the Republican Party and Fox News are forced to contort themselves into ever more tangled twists to excuse it all away.

So while the electorate craves balance, to many voters the balance that’s needed is a little less Trump and a little less right-wing zealotry. The upshot: election prognosticators say the Democrats have a good chance of holding on to the Senate, and the party’s losses in the House look to be fairly small, though it seems it will lose control.

Another force is at work, too. Trump endorsed a number of sub-par candidates in Republican primaries. Some of these won – and their deficiencies are now on display. There’s a TV doctor known for promoting quack cures running in Pennsylvania, and a malevolent election denier in Arizona who doesn’t think the US should send aid to Ukraine.

And yet those two clowns are Abraham Lincolns compared with the party’s candidate in the southern state of Georgia. Herschel Walker, a college football star long ago, has so many personal, business and moral failings that a coherent list of them would be longer than this column, and an account of his fumbling, incoherent prevarications as they have unfolded would fill up several more. The latest: one of the four women he’s had children with says Walker, stridently anti-abortion – you guessed it – paid for her to have an abortion.

And yet the races in Pennsylvania and Georgia remain close, and this is a problem that transcends Trump.

America’s political structures are tested and strong. But even they can’t withstand a population determined to destroy them.

Bill Wyman is a former assistant managing editor of NPR in Washington. He teaches at the University of Sydney.