A WOMAN and five children have died after she drove their van the wrong way on Interstate-90 and smashed into a car, also killing a passenger, police say.

The authorities have confirmed with The Sun that a total of seven people were killed in from this horrific accident. 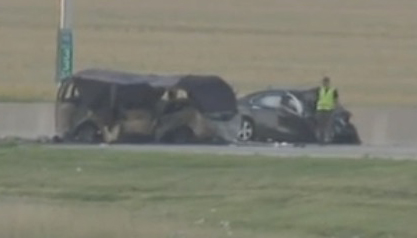 The van was driving westbound on the interstate when it stuck a car head-on.

Illinois State Police told The Sun that the both vehicles "became fully engulfed."

The accident happen at 2.11am on Sunday near Hampshire, Illinois.

One person was airlifted to a local hospital with serious injuries.

All westbound lanes have been closed off near milepost 33, so police can investigate

Police have informed The Sun that traffic has been diverted off at Anthony Road.

The eastbound lanes have since been reopened.

More to follow…For the latest news on this story, keep checking back at Sun Online.