A grieving daughter has been convicted of weapons offences after police caught her proudly displaying her late karate expert father’s ceremonial Samurai sword above her mantelpiece at home.

Care assistant Jayne Burgess, 55, had been left the curved Japanese katana by martial arts instructor Roy Elden – a 6th Dan and an approved ‘Sensei’ – after he was given the item as a gift for his devotion to the sport.

But police raided the property after Burgess’ wife Melanie dialled 999 following a drunken row over who should inherit jewellery belonging to Mr Elden.

A court heard Melanie claimed her spouse of 14 years Burgess had taken down the sword in a fit of rage and whilst the blade was still in its sheath, threatened to ‘chop off her hand and fingers’ saying: ‘At least it will mean you cannot get the jewellery.’ 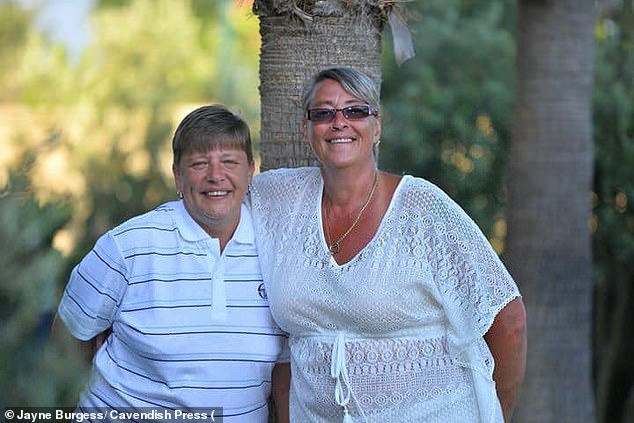 Jayne Burgess (right) pictured with her wife Melanie, left. Police spotted the samurai sword after being called to the property after a drunken row between the two, a court heard 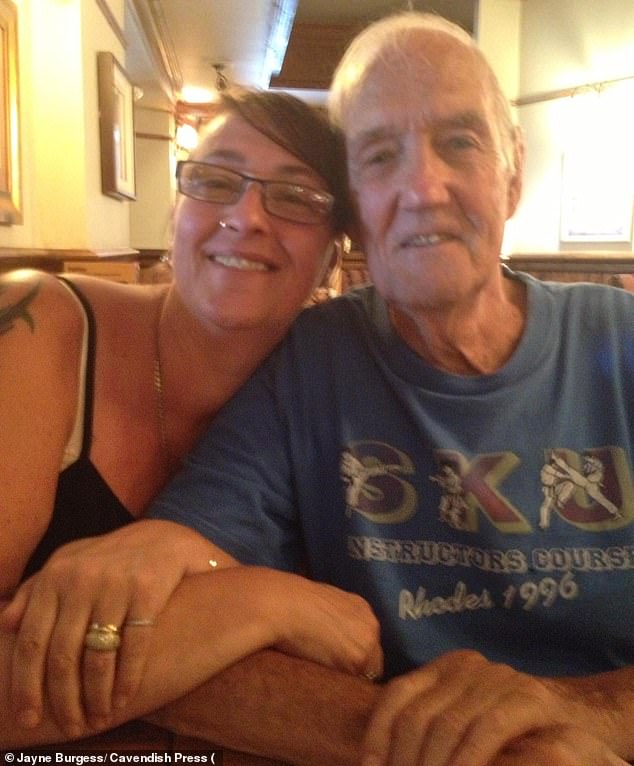 Jayne Burgess pictured with her late father Roy Elden. Burgess was convicted of weapons offences after police caught her displaying her late karate expert father’s ceremonial samurai sword above her mantelpiece at her home in Stockport 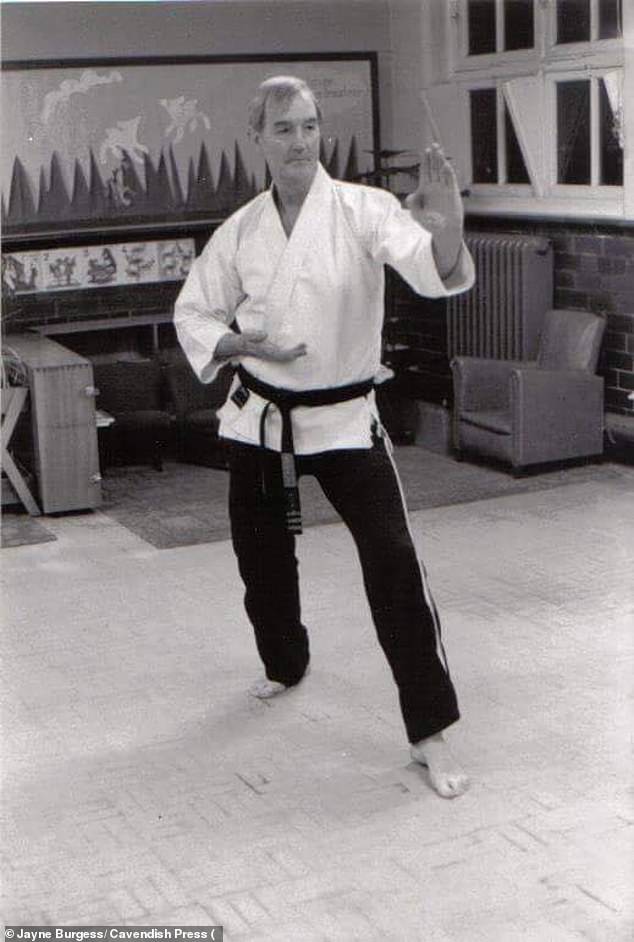 Roy Elden pictured in his martial arts heyday. Mr Elden, a 6th Dan and an approved ‘Sensei’, was awarded a ceremonial samurai sword as a gift for his devotion to the sport. He died in 2013 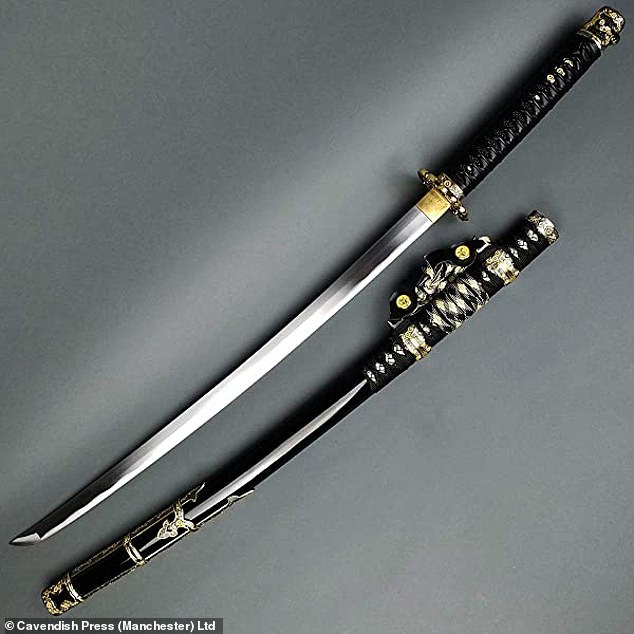 Stock image of a katana sword, similar to the one seized by police who raided Burgess’ home

No action was taken over the alleged threats after the couple, from Portwood, Stockport, Greater Manchester,  kissed and made up, but police charged Burgess with a little-known offence of possessing a bladed article in a private place which came into force last year and carries a maximum of 12 months in jail.

What does the law say about keeping offensive weapons, knives, bladed and pointed articles at home?

Alterations to the Offensive Weapons Act 2019, which came into force last July, made it illegal to have curved swords with a blade larger than 50cm at home.

It carries a maximum sentence of 12 months in jail.

A private place is defined as a place other than a public place such as school premises, further education premises, or a prison.

Prior to the changes made, where the police find a zombie knife, a flick knife or a butterfly knife, for example, in someone’s home, they could only take action and remove the knife in question if it is considered to be evidence in a criminal investigation.

Previously suspects carrying knives could only be arrested if they were caught in a public place.

The ceremonial sword was confiscated as part of the investigation and was later ordered to be destroyed.

Mr Elden who specialised in the Japanese Shukokai Karate passed away in 2013, aged in his 80s.

At Stockport Magistrates Court, Burgess who cares for dementia patients and who has never previously been in trouble with police, admitted the charge and was conditionally discharged for 18 months.

Gareth Hughes, prosecuting said: ‘The police were only alerted to the existence of the weapon when Burgess’s partner Mel called the police after a domestic dispute they had last April.

‘The defendant and her partner had been drinking and got into an argument about who would take ownership of Burgess’s late father’s jewellery. Her father died nine years ago.’

‘This argument got heated and at one point the defendant armed herself with the sword and made threats towards Mel. According to reports she threatened to ‘chop her hand and fingers off if it meant she could not get the jewellery.’

‘When later questioned by Police, the defendant admitted that her intention was to intimidate her partner with the Samurai Sword. It was fortunate that the blade was in its sheath when it was used to threaten her partner otherwise this would have been a much more serious issue.

‘Mel had called the police to their address and the defendant was subsequently arrested once they discovered the offensive weapon. After questioning, where the defendant was fully compliant with officers, she was released on bail and later released under investigation.’

In mitigation defence lawyer Simon Morton said the two metre long sword belonged to her late father who taught karate in Crewe and now has a karate trophy named after him. 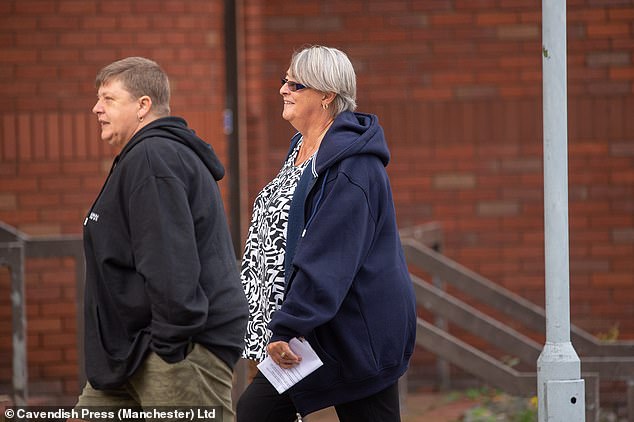 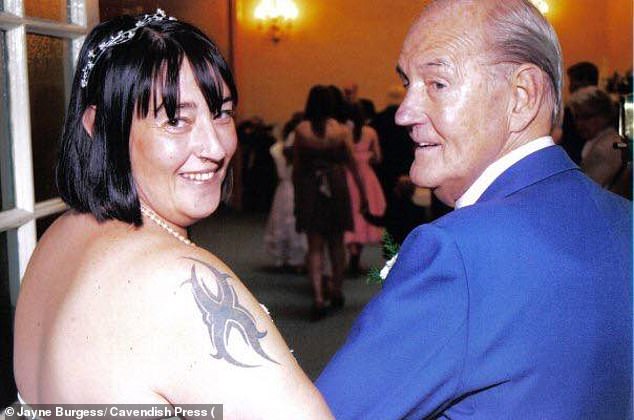 Jayne Burgess pictured with her late father Roy Elden on her wedding day. He died in 2013

‘He was a 6th Dan martial artist and the sword was given to him as a reward for his time in the sport,’ said Mr Morton.

‘The defendant had always had it in her house since her father died, just sitting on the mantelpiece in its sheath.’

‘She and her partner were going through a difficult time at that point and it just became a big part of her day-to-day life. She has sought the help of alcoholic action groups since this incident and is trying to make a positive change in her life.

‘She and her partner, who is in court today, are living back together now and things are getting back to normal. They have just got back from a holiday in Turkey and the relationship has been rebuilt.’ 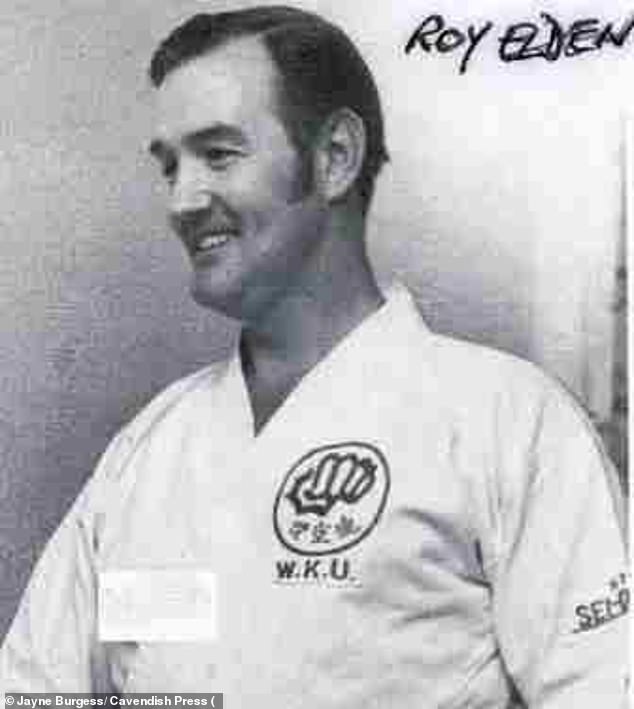 ‘The delay in proceedings, over a year now, has been taxing on the couple and they just want to move on from this.’

‘Many people across the country will be unknowingly committing the same offence of possession as Ms Burgess, but of course, ignorance of the law is no defence.

Alterations to the Offensive Weapons Act 2019, which came into force last year made it illegal to have curved swords with a blade larger than 50cm at home.

In sentencing, lead magistrate Paul Dunn said: ‘After listening to what has been said by both counsel, we do consider this a serious matter.

‘The fact that you have used the weapon in a private manner and that you were under the influence of alcohol does not excuse you for your actions.’

‘However, you are clearly remorseful and you have gone out and got the help you need without the assistance or direction of the court. Therefore, if I were to involve probation it would be similar to what you have already done.’

Burgess was also ordered to pay £107 in costs and a victim surcharge.