Boy, 14, is feared to be the latest victim of a terrifying kidnap gang preying on teenagers and women in Worcester

A schoolboy, 14, was approached by two men as he walked home from school last week in what could be the latest in a spate of attempted kidnappings, police revealed today.

Seven chilling incidents have taken place in the Arboretum area of Worchester since September 10 – with victims describing being told to ‘come’ by two large men.

In the latest attempt, Xanda Chesworth saw two men standing ahead of him as he walked along a narrow road on his way home from Tudor Grange Academy on Friday, September 25.

He said: ‘I turned down the road and two men were standing there. The pavement is quite narrow with cars parked on the side and there was not any space. I could just get by.

In the latest attempt, Xanda Chesworth saw two men standing ahead of him as he walked along a narrow road (pictured, Lower Chestnut Street) on his way home from Tudor Grange Academy on Friday, September 25 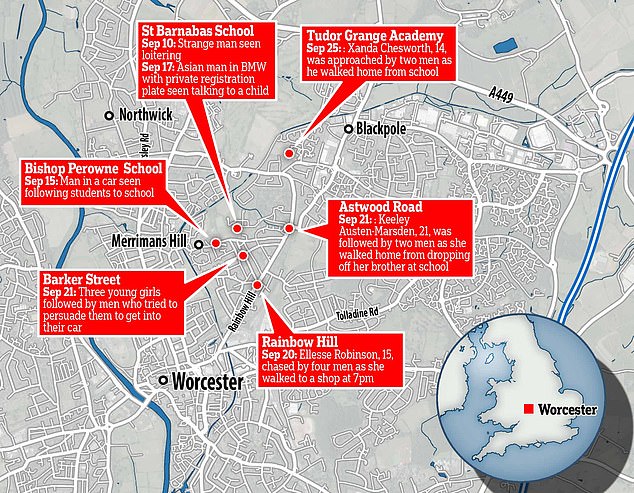 ‘They said: “Come through”. I started to go near them when a mixed-race guy grabbed the bottom of my blazer.

‘They said: “Come with us”. I thought they were going to take me away.’

In a panic Xanda dropped his bag and ran away. He said: ‘I started shouting and screaming. And they started walking towards me.’

After the attempted kidnapping, Xanda’s father Alex bought his son and daughter panic alarms to carry while they walk to and from school.

Alex wrote on Facebook: ‘My son was approached by two low life pieces of s**t trying to grab hold of him down near the park in the Arboretum today on his way home from school.

‘Thank god there were two people playing with a dog who my son ran to for help. I wish I could find them to thank them in person.

‘Please parents be careful as these b*****ds don’t seem to be bothered about doing this in broad daylight. 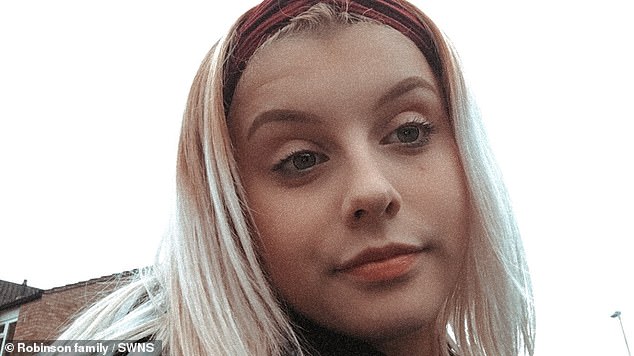 Victim Ellesse Robinson, 15, was left sobbing when she fled four men who tried to snatch her off the street on Sunday night in Worcester, one of six separate suspicious reports in the city

He said the family had called police and were preparing to give a statement, adding: ‘This is crazy, kids are not safe going to school and coming home and I know that these b*****s are targeting women too.

One of the men was mixed race, in his 40s and wearing a dark-coloured jumper. Xanda said he was skinny and about 6ft tall.

The other man was apparently black and in his late 30s or early 40s. He was around 6ft 1ins and wore a dark shirt.

The disturbing incident is the latest kidnapping attempt in Worcester.

On most of the occasions, young women or children were either approached, chased and even grabbed by men in a silver-coloured vehicle.

Ellesse Robinson, 15, was left sobbing when she fled four men who tried to snatch her off the street on September 20.

The schoolgirl was walking to a shop on Astwood Road in the Rainbow Hill area of the city at 7pm when a car pulled up next to her.

She said: ‘I walked to Premier to buy my boyfriend some sweets and snacks because it was his birthday, which is the reason I was alone or I would’ve been with him. 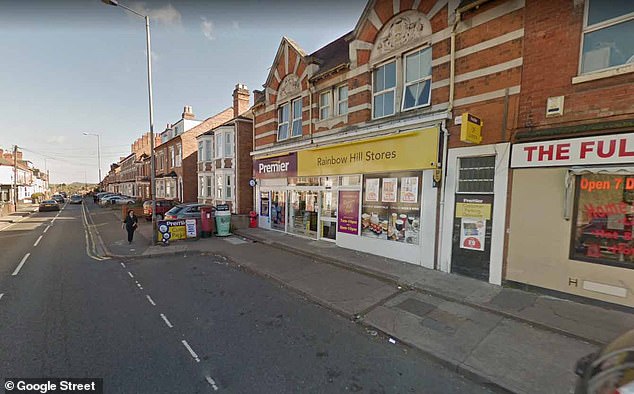 Ellesse Robinson, 15, says she was chased down Astwood Road by men ‘who sounded Turkish or Romanian’ after she had gone to the Premier shop to get sweets for her boyfriend

‘As I walked out of the shop and was waiting at the traffic lights, a grey Peugeot pulled up very slowly towards me.

‘There were not many other cars around and as they pulled up I initially leaned in thinking they needed help but I saw them all laughing.

‘Two men in the back told me to “come”. I stepped back then the man in the front passenger side opened his car door and I genuinely thought he was going to grab me.

‘I felt so scared as they were all in their mid or early 30s and really big.

‘They sounded Turkish or Romanian, they were all tanned. After he opened his door I basically shouted “No! no! no!” repeatedly. 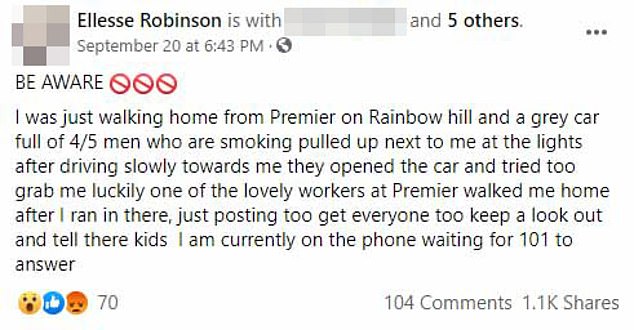 ‘I was edging backwards and then managed to run back into the Premier shop.

‘The manager Sarah was stocking the shelves and I ran up to her and said: ‘Sarah, some men just tried to pull me in their car.’

‘She shot up despite having back problems and ran to the door, then she came back up to me and gave me the biggest hug I’ve ever had in my life.

September 15: Man in a car seen following students walking to and from Bishop Perowne Church of England College.

September 20: Ellesse Robinson, 15, chased by four men as she walked to the shop in Rainbow Hill at 7pm.

September 21: Keeley Austen-Marsden, 21, was followed by two men as she walked home from dropping off her brother at school in Astwood Road.

September 21: Three young girls followed by men who tried to persuade them to get into their car in Barker Street.

September 28: Schoolboy Xanda Chesworth, 14, was approached by two men who stood ahead of him as he walked along a narrow road on his way home from Tudor Grange Academy on Friday, September 25.

‘I cried into her shoulder, my legs were shaking like crazy, it was like a really bad anxiety attack.

‘Sarah walked me home, which I am so grateful for. When we got home we phoned the police.’

Ellesse Robinson’s mum has told how her daughter was left ‘in shock’ after being targeted by the terrifying kidnap gang.

Katrina Spragg, 43, a housewife who has six other children and five grandchildren, said: ‘She’s gone in shock and is shaken by it.

‘She won’t go out and she’s not allowed to go out on her own. She used to come and go from the house but not anymore.

‘I’m not sure if it’s the same people.

‘Ellesse said these people were Turkish or Romanian.

‘The police have said it’s an ongoing investigation. They have been out in force with helicopters, police cars and everything.

‘She was vague on that [the description of the car], it all happened a bit fast.

‘But the police seem to know what they are looking for. Hopefully they will catch them.

‘I can’t say what I would like to happen to them. When she told me I was really, really shocked.

‘It’s disturbing that other incidents have happened within a mile of the house.’

The following day, Keeley Austen-Marsden, 21, was chased by two men as she walked along Astwood Road – a mile from where Ellesse was approached.

She said: ‘It was 9am and I was walking back from the Lyppard Grange Primary School after taking my little brother in and I noticed these two blokes were behind me.

‘I didn’t think anything of it to start with until they got closer to me.

‘They were within arms reach so I picked up my speed and so did they. I was terrified.

‘I ran to the top of the road and when I looked back they had gone.

‘I didn’t see where they went and I couldn’t see their faces as they had hoods on. They were about six foot and stocky.

‘I’m just glad I got my brother into school first. I don’t know what I would’ve done if he was still with me. He’s only nine.

‘I still feel shaken up now.’ 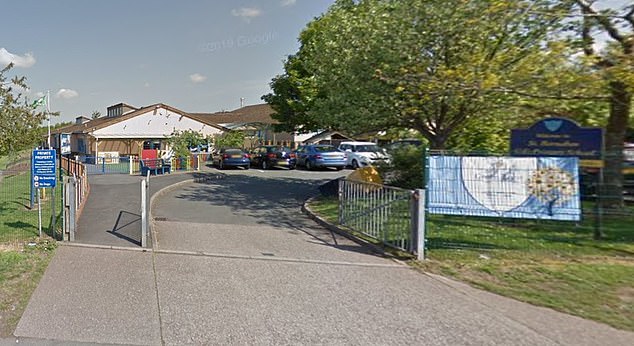 Police were called to St Barnabas CofE primary school, pictured, after reports of a man behaving strangely outside the school’s gates and headteacher Sarah Hanson confirmed several reports had been made to the school and staff had seen the man themselves

Later that evening three girls, including one aged just eight, were approached by men two miles away in Barker Street.

The girls were followed by the men before they ran into a Co-op shop where police were called.

An eyewitness wrote on Facebook: ‘Three young girls, one aged eight, have just been followed and told to get in a car of men.

‘They are safe, they ran in the Co-op and the police have taken them home and they have the car on CCTV.

‘Just be vigilant of what your kids are doing and who they are with because it only takes a split second for them to be grabbed and taken.’

The investigations follow three more incidents at two schools in the city this month.

On September 10 police were called to St Barnabas Church of England Primary School after reports of a men behaving strangely outside.

Headteacher Sarah Hanson said: ‘We did have several reports of a man behaving suspiciously outside our school.

‘Members of staff saw this person and so did two workmen who were working on the grounds opposite.

‘The man was approached and he moved on. He returned later and was witnessed again by members of staff.’

On September 15 Bishop Perowne Church of England College contacted parents with the message: ‘Please be aware we have had reports of a male approaching and following the students in a car close to the school.

‘Police have been notified and we are continuing to liaise with them as they follow this up.’

Two days later on September 17, an Asian man in his 30s, in a BMW with private plates, was seen talking to a child through the car window near Barnabas Primary School.

West Mercia Police have ruled out the incident involving the three girls in Barker Street being related to the gang who approached Ellesse in Rainbow Hill but have stepped up patrols across the city.

Detective Inspector Ed Slough, CID lead investigator said: ‘We are aware of heightened concerns surrounding the reporting on social media and local news reports of a group of men in a silver/grey saloon vehicle approaching people in the Arboretum area of Worcester. 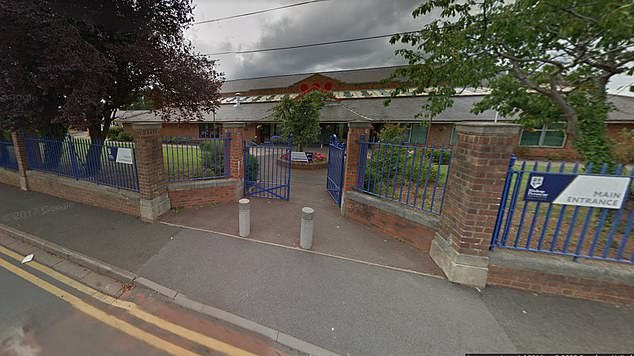 ‘Some incidents are reported to have happened whilst children have been walking home from school or in the early evening or a vehicle has appeared to be driving slowly past schools or children.

‘We would like to reassure people that incidents such as this are rare, and we have an increased number of our safer neighbourhood officers in the area who can answer any questions or address any concerns you may have.

‘I want to assure you that we are looking into all individual reports made to us, and would like to update you that at this time we don’t believe all of the reports are linked and we are working to establish the nature and type of offences.

‘We are treating each report separately, visiting and speaking with those that have reported incidents and viewing any CCTV in the area that they have been approached or had vehicles slow near them and have shown concern.

‘We want to encourage the community to continue to be observant and report any suspicious activities to us as quickly as possible.

‘We are working with local schools to ensure updates are provided to the community in a timely manner.

‘If you have seen anything suspicious in your area please report online at WestMercia.Police.UK or by calling police on 101.

‘I hope this helps provides you with some reassurance. We will continue to work with the school and partners to address any concerns.’