Worst park ever? How on earth did this driver's car end up here

Worst park ever? How this driver’s car ended up on top of a Mercedes in a busy Westfield shopping centre

A driver has inadvertently come up with an interesting way of finding a car park in a busy shopping, ending up on top of a Mercedes.

Emergency services were called to Westfield shopping centre in Hurstville, Sydney’s south, shortly before 10am on Thursday finding the luxury car wedged under a Honda Civic.

It is understood the driver of the Honda hit the boom gate causing the vehicle to roll onto the parked car.

The driver managed to escape without any physical injuries. 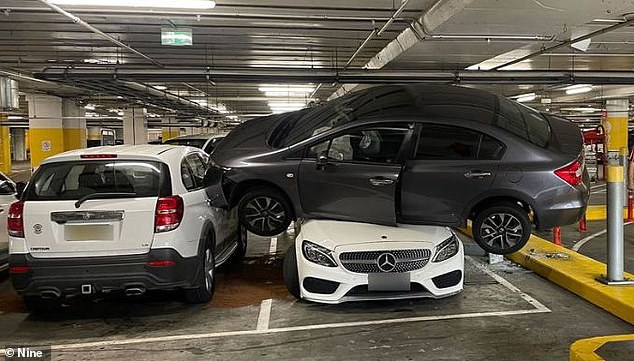 One driver has gone with a controversial parking method, finding a spot on top of an expensive Mercedes in a bustling shopping complex in Sydney’s south

A Tik Tok video showing the incident had many people questioning how it was even possible, before having a good chuckle at the visual.

‘Well you can’t park there sir,’ one person commented.

‘Someone tell him that he still has to pay for parking,’ said another.

One Tik Tok user posted a video alleging the driver of the Civic tried to cut her off and her impatience caused the accident.

Her video captioned, ‘she was fine but leave the road rage to hot wheels’, said the lady driver was attempting to cut her off for a second time, flying through the boom gate and on top of the Mercedes.

Commenters on the video said the incident was karma for the driver’s actions.

‘That’s the best karma. you should have driven past and waved..lol,’ one person wrote.

‘I love karma,’ wrote a second. 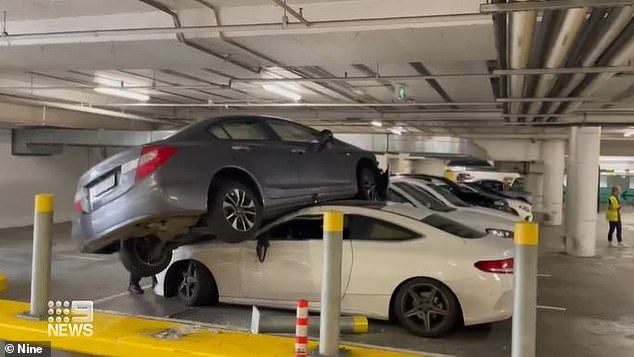