Rome: A hapless Italian robber who was stuck for eight hours in a tunnel dug as part of an alleged attempt to raid a bank had to be rescued by the authorities after his gang called for help.

The gang of four men allegedly started tunnelling in an abandoned shop near the Vatican in Rome, but when a section that passed under a road collapsed, one of them found himself trapped 6 metres underground. 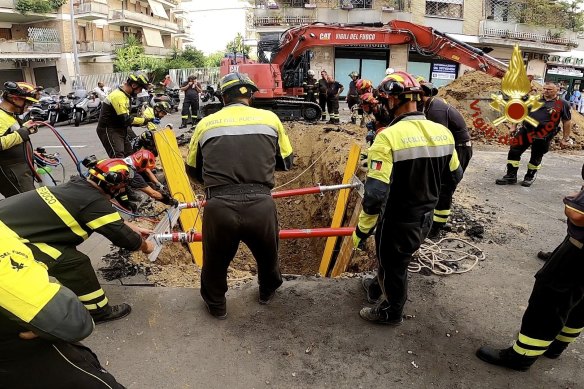 Italian Firefighters dig up the road to rescue a man blocked in a tunnel in Rome. The opening to the tunnel was inside a recently rented store on the street, with its front windows covered in opaque plastic, authorities said. Credit:AP

A rescue operation was started after the three other members of the gang called emergency services and left an anonymous message.

A large red digger gouged a huge hole in the road, giving 30 firefighters and other specialists access the tiny tunnel.

The would-be bank robbers tried to flee but were caught by Carabinieri police. All four were reported to have previous convictions for theft and armed robbery.

Police believe they were digging the tunnel to reach one of two nearby banks, with the intention of robbing it in the next few days. One of the banks belongs to Monte dei Paschi di Siena, the world’s oldest bank, which was founded in 1472.

As the digger gouged out chunks of soil and asphalt, firefighters used wooden boards and steel poles to shore up the edges of the hole.

The more delicate phases of the excavation were done with shovels and firefighters’ bare hands.

The operation lasted for more than eight hours, until specialist rescuers were finally able to reach the man and pull him out alive, to the applause of onlookers. 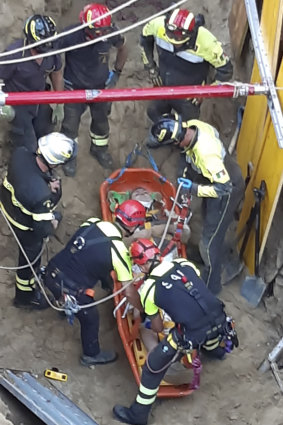 Italian firefighters rescuing a man who was trapped in a tunnel in Rome.Credit:AP

As they worked to free the “mole man”, as one Italian newspaper dubbed him, they gave him oxygen, replicating techniques employed to save the survivors of the frequent earthquakes that strike Italy.

He was extracted from the tunnel and placed on a stretcher with a brace around his neck, at which point he asked for water – and a cigarette. “Mamma, they’re pulling him out, you can see his feet,” said a child who watched the drama unfold from a balcony.

The man was taken to hospital, where his condition was said to be not life-threatening.

“For hours he was imploring us to save him. It’s a miracle he’s alive,” a rescuer told the daily newspaper Corriere della Sera.

“It was a complex operation. The tunnel probably collapsed because of the sandy soil and, perhaps, because of all the rain we have had in the last few days.”

Weeks of searing temperatures in Italy have given way in recent days to violent thunderstorms and heavy downpours.

Italy celebrates its midsummer ferragosto holiday on Monday, when the country grinds to a standstill and banks and offices are closed.

“For about a week I heard the sounds of a pneumatic drill coming from the empty shop during the evenings.

“I thought they were just renovating it. There was light coming from behind the shutters.

“Now I understand what was going on,” said Alessandro Quaranta, who runs a wine bar close to the abandoned shop.