A U.S. veteran who missed his high school graduation because of his choice to serve in the military during World War II has finally gotten the diploma he deserves.

Raymond Schaefer, 96, was honored Thursday during a surprise ceremony at Waterford Union High School in Wisconsin.

“It’s great. I thought of it many times but never got around to it,” he told Fox6 Milwaukee while wearing a cap and gown. 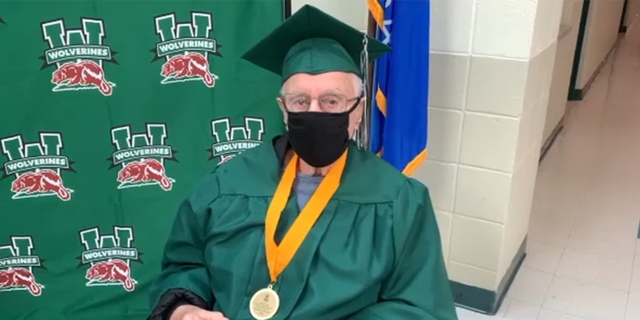 Schaefer, following the completion of his service, returned to the U.S. and worked for nearly 40 years in the manufacturing business in Milwaukee, the station reported.

He never went back to finish his education at the Racine County School of Agriculture, which ultimately closed its doors in 1959.

But on Thursday, a marching band, school board members, teachers, students, family and friends were on hand to give Schaefer a rousing welcome at a nearby high school in Waterford.

“He’d say things like, Well, I wish I had a high school diploma but I was just too dumb,” Cynthia Bennett, a family friend, told Fox6 Milwaukee. “But it’s like, that wasn’t the case at all. He quit school to support his family.” 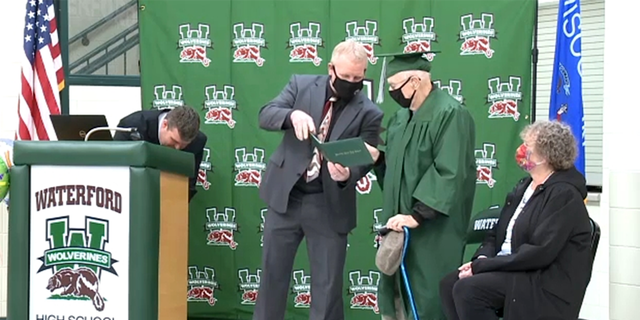 Schaefer is presented with his diploma Thursday.
(FOX6)

Schaefer was given his diploma and an honorary medal commemorating his years spent at the Racine County School of Agriculture.

“I proudly present to you an Aggie, a graduate of 1943, recognized on this day, March 18, 2021,” Waterford Union High School Principal Dan Foster said, according to the station.

Schaefer added that the whole experience was “really something.”