Yachts are being grounded as curbs on Russians start to bite

The fleet of oligarchs’ yachts facing a storm in every port: Luxury vessels are being grounded around the world as curbs on Russians over Ukraine war start to bite

Roman Abramovich has moved two of his superyachts to Turkey as he seeks a haven to protect his fortune from sanctions.

Solaris, above, has been joined by the giant Eclipse vessel as the Chelsea owner seeks to avoid their seizure in the country which has said it has no plans to implement sanctions. Abramovich is believed to have been in Istanbul last week but not on board either yacht as they arrived in Turkey.

The 430ft-long Solaris, which cost £430million, is the newest addition to the Abramovich fleet after taking to the seas last year.

It has 48 cabins across eight decks, a crew of 60 and space for 36 guests who can make use of a helipad and beach club area. Designed by Australian Marc Newson and built by a German shipyard, it features the largest panes of glass ever built into a yacht. Its sister vessel Eclipse, one of the world’s biggest yachts at 533ft long, is reported to have built-in missile defences. 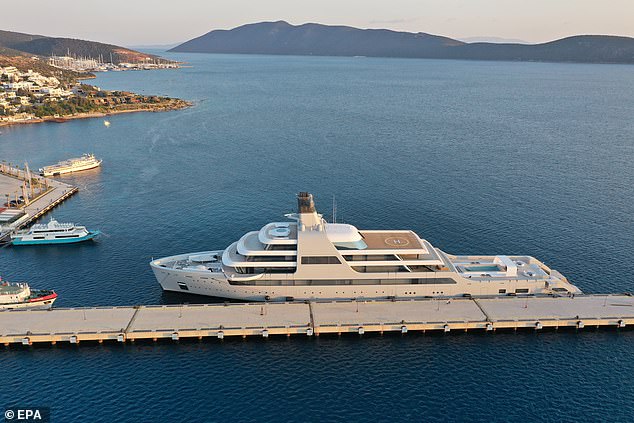 The 430ft-long Solaris, which cost £430million, is the newest addition to the Abramovich fleet after taking to the seas last year

Scheherazade, which is currently docked for repairs in Tuscany, is said to be staffed by Putin’s ‘personal guards’ and owned by him through a secretive shell company. In a speech to the Italian parliament, Mr Zelensky said the country must freeze all assets that belong to Russia’s elite.

He insisted: ‘Freeze their properties, their accounts, their yachts – from Scheherazade to the smallest.’ The ship’s British captain Guy Bennett-Pearce has denied ever seeing Putin on board. Last night his mother Debbie told The Daily Telegraph that her son would never work for a ‘murderer’.

Italian police are currently investigating the ownership of the 460ft vessel, which is said to have a built-in weapon system able to shoot down drones. 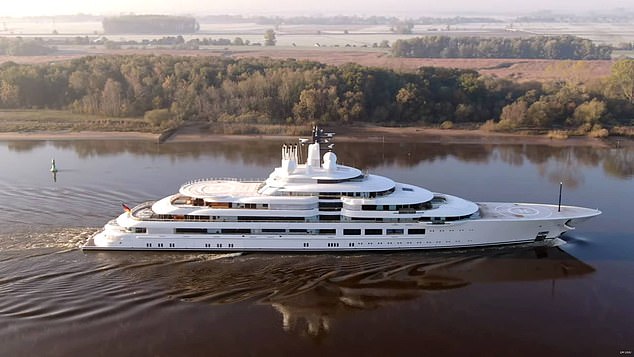 Scheherazade, which is currently docked for repairs in Tuscany, is said to be staffed by Putin’s ‘personal guards’

Authorities in the British overseas territory detained the £57million Axioma after it docked there on Monday. Pumpyansky, worth an estimated £1.8billion, has been sanctioned by the UK and EU. The Gibraltar government said the Axioma had asked for permission to dock and ‘was confirmed to be the subject of an arrest action by a leading international bank in the Supreme Court of Gibraltar. The vessel is now subject to arrest by the Admiralty Marshal until further order.’ It had left Antigua on February 27. The Axioma has five decks, which include a cinema and swimming pool.

It has previously been available to charter privately at a cost of £420,000 a week. 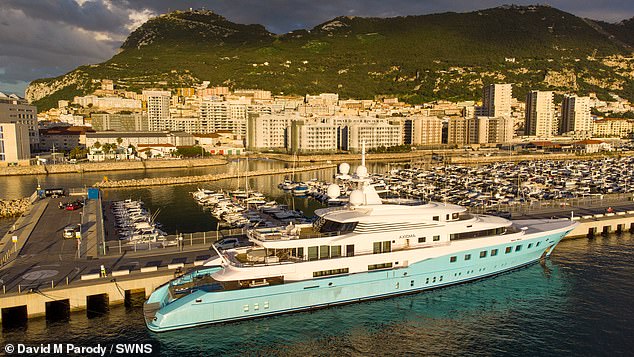 The £58million superyacht owned by ex-KGB officer Vladimir Strzhalkovsky is trapped in Norway – not by sanctions, but by locals who refuse to sell him fuel.

The 223ft-long converted icebreaker Ragnar has been docked in Narvik since February 15 – snubbed by suppliers in protest over the Ukraine invasion. Mining tycoon Strzhalkovsky, 67, is not subject to sanctions, but is thought to be still linked to Vladimir Putin after they served together in the KGB. Local oil supplier Sven Holmlund said: ‘Why should we help them? Let them row home or hoist sails!’

The yacht’s British captain Robert Lankester has pointed out that none of the crew is Russian, insisting: ‘We have nothing to do with the owner.’ The crew were hoping for an imminent departure last night after they found a supplier for 300,000 litres of diesel for the vessel which is kitted out with jet-skis, snowmobiles and an English-style pub. 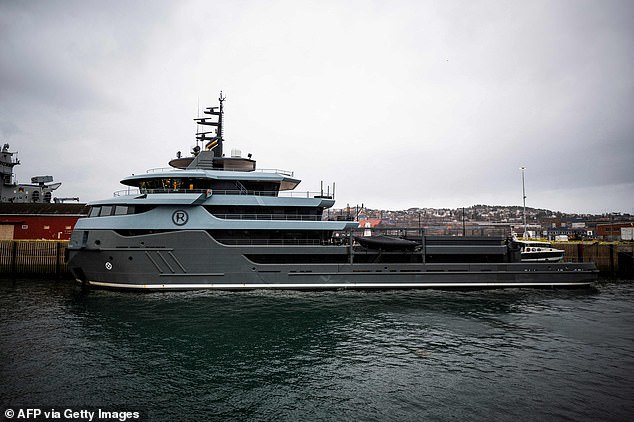