Two yobs were today branded ‘idiotic and deplorable’ by a judge after they broke into a popular zoo, damaged animal enclosures and one even hurled a bottle at a giraffe’s head.

Nathan Daniels, 21, cut the barbed wire fence at Marwell Zoo before he and Bradley Green carried out the attack, leaving animals ‘very distressed’ as they acted with ‘extraordinary stupidity’.

Daniels pleaded guilty to damaging the penguin’s enclosure while Green, 24, admitted damaging an enclosure containing giraffes as he hurled the bottle during the night time raid at the zoo near Eastleigh, Hampshire.

The court heard a series of disinfectant bottles were thrown into enclosures, one of them kicked out at a tiger and a giraffe was left with two deep gashes to her leg as a ‘consequence’ of the distress. 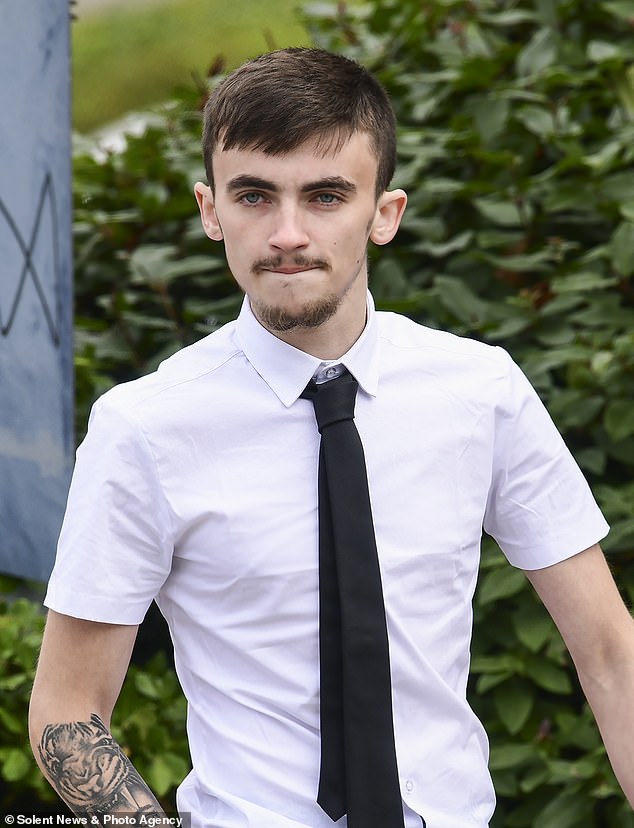 Nathan Daniels, pictured, was  one of two men who broke into Marwell Zoo in Eastleigh, Hampshire during February 2021 and caused distress to the animals within 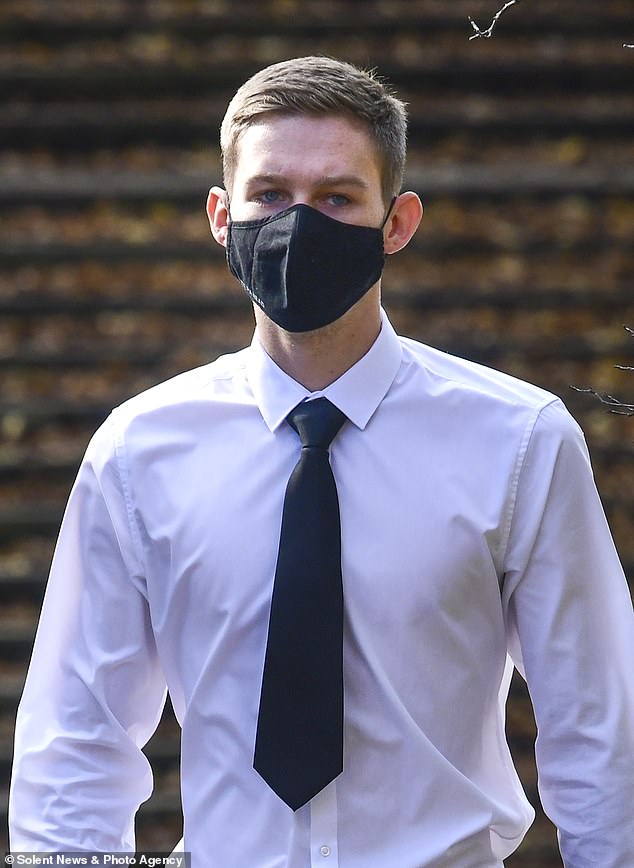 Bradley Green, pictured, and Daniels were both handed 12-month community service orders including 120 hours of unpaid work. They were both ordered to pay the zoo £750 each in compensation

Today the pair were each handed a 12 month community service order consisting of 120 hours unpaid work and ordered to pay £750 compensation each to the zoo.

Prosecutor Ellie Fargan told Winchester Crown Court, Hampshire, the offences took place at the zoo in February 2021, when it was closed to the public due to the Coronavirus pandemic.

The court heard the pair broke into the zoo on February 15. Prosecutors showed footage, taken by Green and uploaded onto Snapchat, which detailed events that caused distress to the animals, including throwing a bottle at a giraffe’s head to attract its attention.

A tiger was also filmed being encouraged to approach a fence before one of them kicking out at it and scared it away. This was reported by one of Green’s contacts who saw the video and police picked them up shortly afterwards.

Ms Fargan told the court zookeepers found stones, sticks and disinfectant bottles within the tiger enclosure the next morning and other items were found in the cheetah enclosure.

The giraffes were said to have been ‘disturbed’ by the intruders’ presence, with one called Irsula – who has been at the zoo since 2011 – sustaining two long, deep gashes to her leg as a ‘consequence’ of the distress.

A disinfectant bottle and a bucket were also found in with the giraffes. 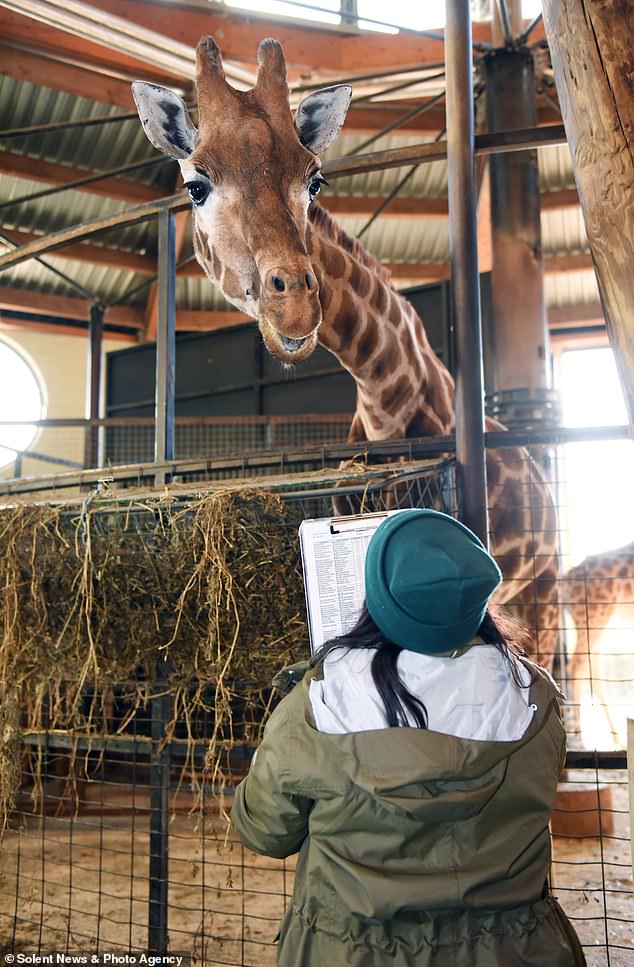 The court heard that some of the animals were distressed following the incident. Pictured: A giraffe with a keeper before the attack 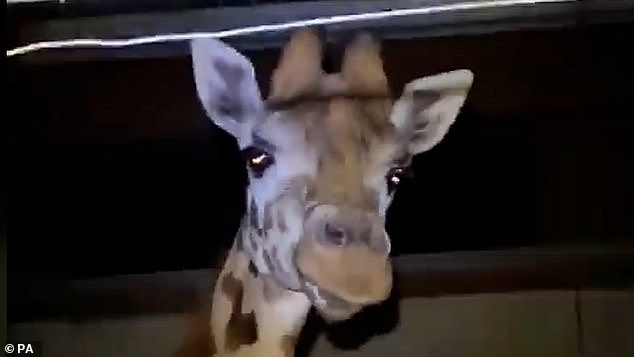 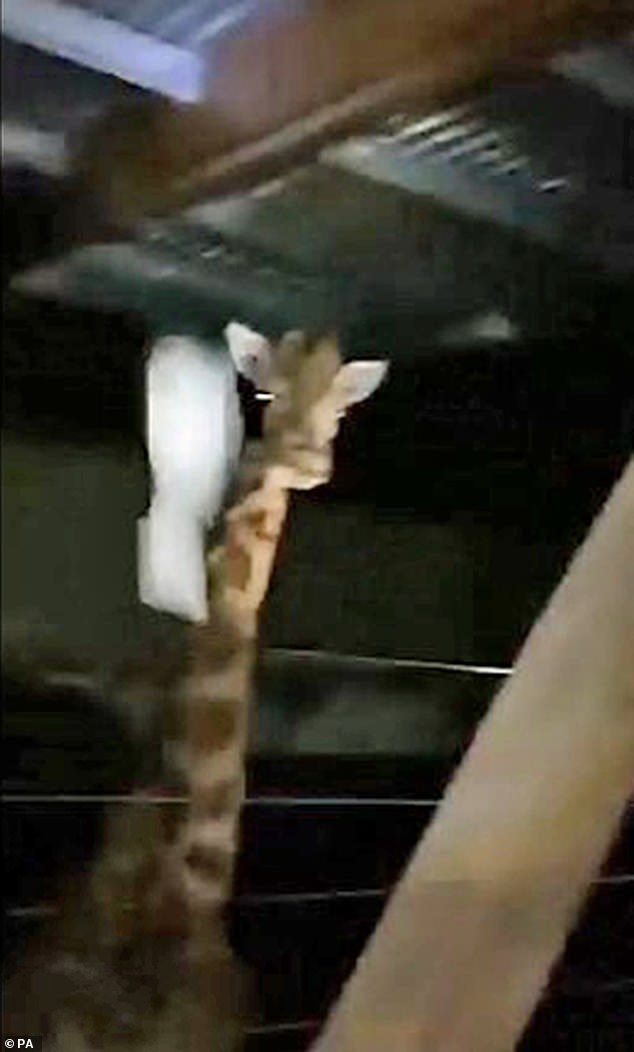 Ms Fargan continued: ‘Keepers were of the opinion damage caused to a door with giraffe hair on it in the enclosure was caused by giraffes hitting the door at force when in distress.’

Regarding the damage done to the penguin enclosure, the court heard a life-ring normally kept in the viewing area was in the pool and the glass door of the gallery had been cracked open.

Ms Fargan said penguin keepers explained how the animals were left ‘anxious, distressed and disturbed’ by their actions and avoided the area of the pool the life-ring was in the following morning.

Daniels pleaded guilty to criminal damage within the penguin enclosure which included forcing the glass entrance and exit door open.

Defending Green, Dan Reilly, said the 24 year old had ‘genuine deep regret and remorse’ for what he had done, and was ‘shamed’ because he considers himself an ‘animal lover’. 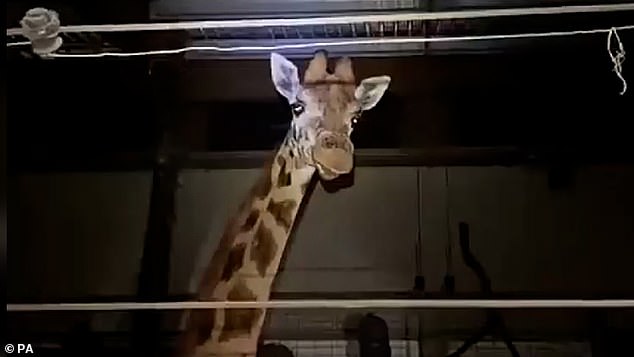 The court heard that a giraffe, pictured suffered injuries to its legs after it kicked the side of its enclosure while under threat

Addressing the pair, Judge Richard Parkes KC said: ‘Almost two years ago now, you two together had the idiotic idea of driving to Marwell Zoo during the lockdown when it was closed.

‘You, Daniels, cut the perimeter fence and got inside illicitly and when you were inside you acted with extraordinary stupidity.

‘You caused damage to the inside of the zoo and you caused distress to the animals.’

‘You, Green, broke a door at the rear of the giraffe enclosure and threw a bottle of something at the giraffe which you filmed as you did it.’

‘You did behave in an absolutely deplorable fashion and you must of course be punished.’

Multiple police units, including armed response officers with night vision goggles, a dog unit and a helicopter were dispatched to catch the intruders following the incident, amid fears endangered animals were at risk.

Marwell Zoo opened in 1972 and has proved a popular family destination since. It has been home to giraffes and tigers since then and currently homes four giraffes and two tigers.